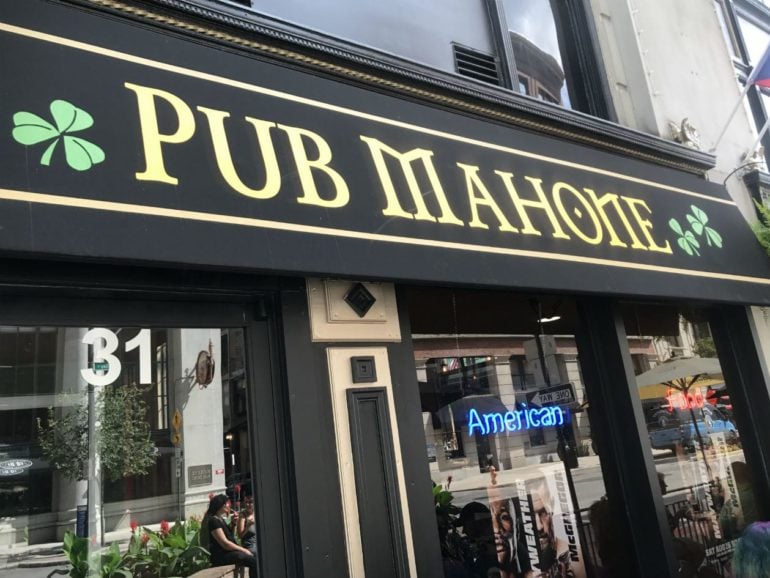 Pub Mahone is an Irish Pub with a neighborhood bar feel, right in the heart of downtown.

Downtown on East Gay Street, right next to the Vault and across from the Residence Inn Marriott, is Columbus’ newest Irish pub and Gaelic watering hole, Pub Mahone. It had been in the works since late last year and its official opening party happened just over the weekend. As one to never scurry away from a pint and a good bit of fun, I decided to check the place out for myself and exercise my God given right to get into trouble. 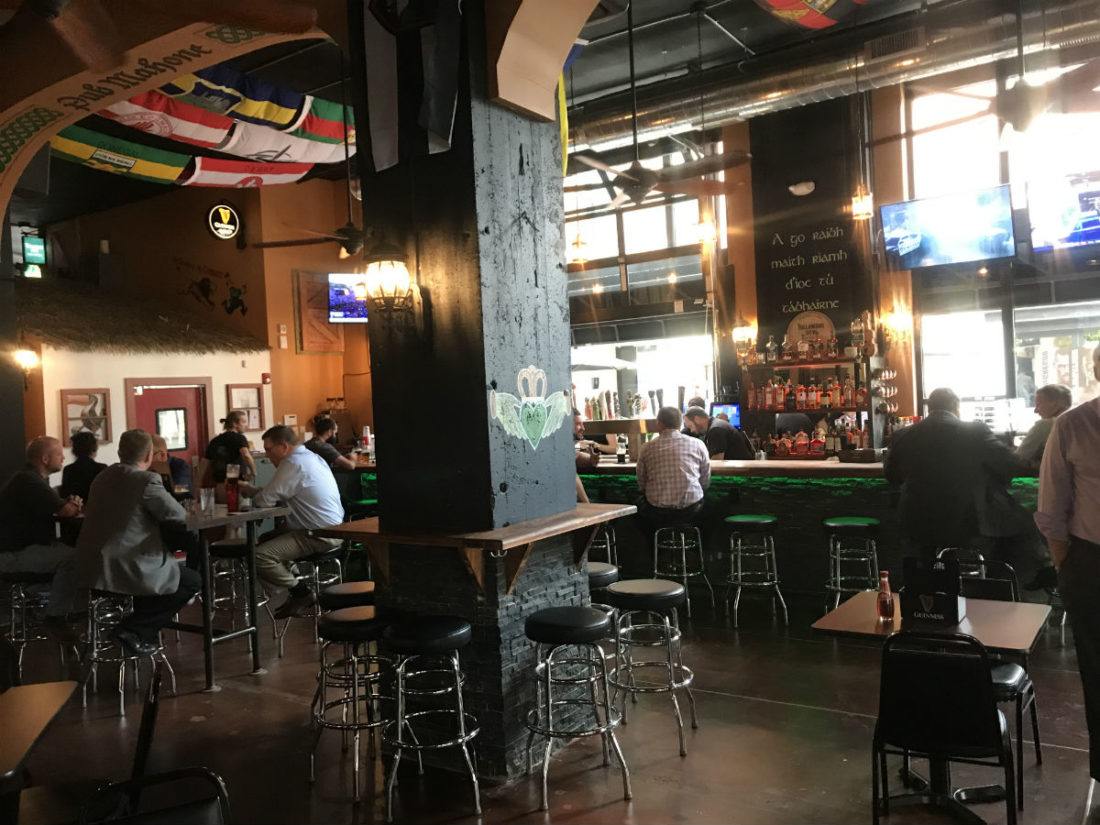 From the outside, it had a pretty typical downtown bar layout.

A small patio stretched around its front and to the side. A miniature shopfront awning displayed the bar name in faux Gaelic script, accentuated by cartoonish clovers. Inside the bar was all business, with high ceilings and a dark floor that seemed to devour all of the light seeping in from the outside. It made you want to hunker at a table with your elbows down or belly-up to the bar and get right to it.

When I first walked in I couldn’t help but feel anything but the new bar jitters. You know the ones you get when you walk into a pub you’ve never been before. When you feel like you’re in enemy territory, like everyone’s turning to eye you suspiciously and anything you say could bring the record to a screeching halt. I was just about to shake my nerves as I settled into a tall glass of something cold and bitter when out of the corner of my eye, this thing pops up: 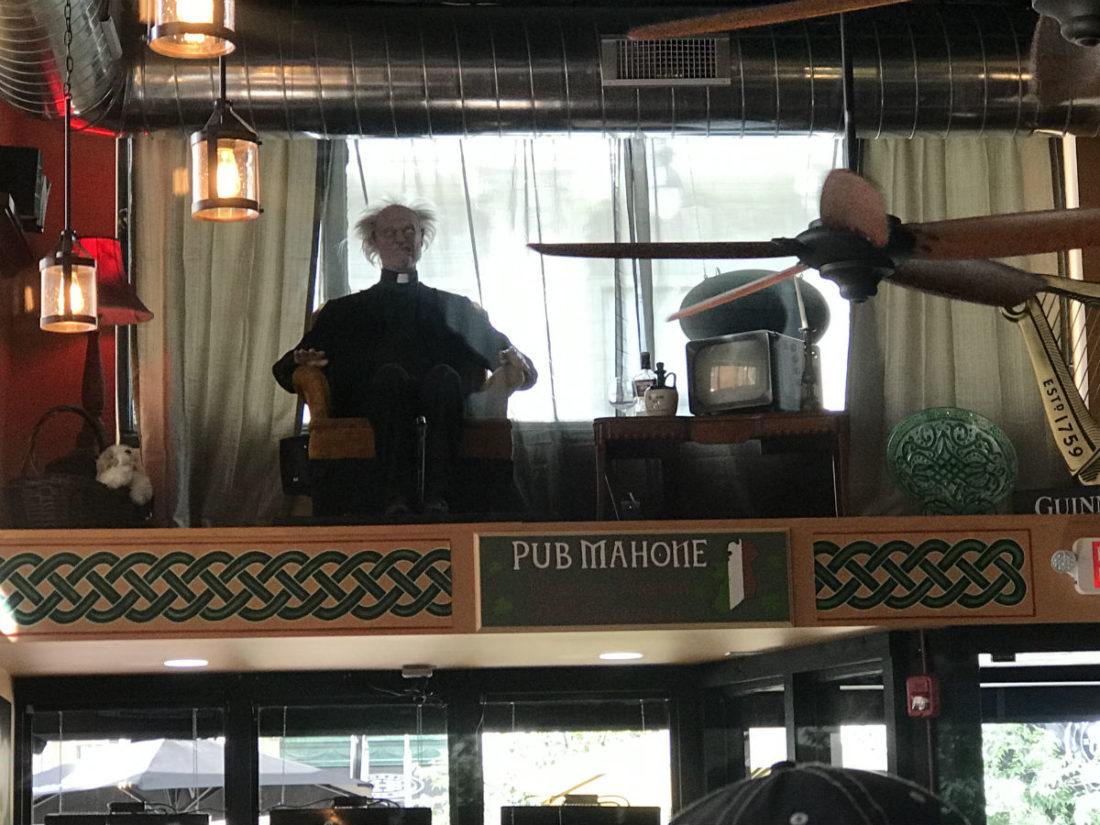 Clearly, it was some sort of evil, religious, Doc Brown from Back to the Future, sent to wreak its creepy terror on me personally. I shrugged and carried on with my drink and tried to ignore it. A pretty difficult task once you already know it’s there staring down at you, practically muttering obscenities under its breath.

Checking out the menu I noticed most of the sides for the main dishes seemed to include some form of mashed red potatoes, which I am all about. They mostly offered pretty standard Irish bar food with the addition of sandwiches, wings, and the like. Something I was particularly excited to learn was that their kitchen stays open pretty late into the night, which isn’t very common, especially for places downtown.

The charm of the place was beginning to rub off on me.

Besides the super weird priest manikin that looked a whole lot like Rick from Rick and Morty, I was becoming more at ease. I started to feel meaner, gruffer, and I suddenly felt the need to watch as many sports as humanly possible. It should be noted that I hate (hate) most sports.

I appreciated the layout quite a bit. It had this pretty cool back window right behind the bar that opens up, granting bar access to anyone sitting on the side patio. There were flags everywhere representing counties in Ireland. Tongue-in-cheek phrases written in Gaelic decorated the walls, and soft glowing vintage lamps smoldered away in its darker corners. 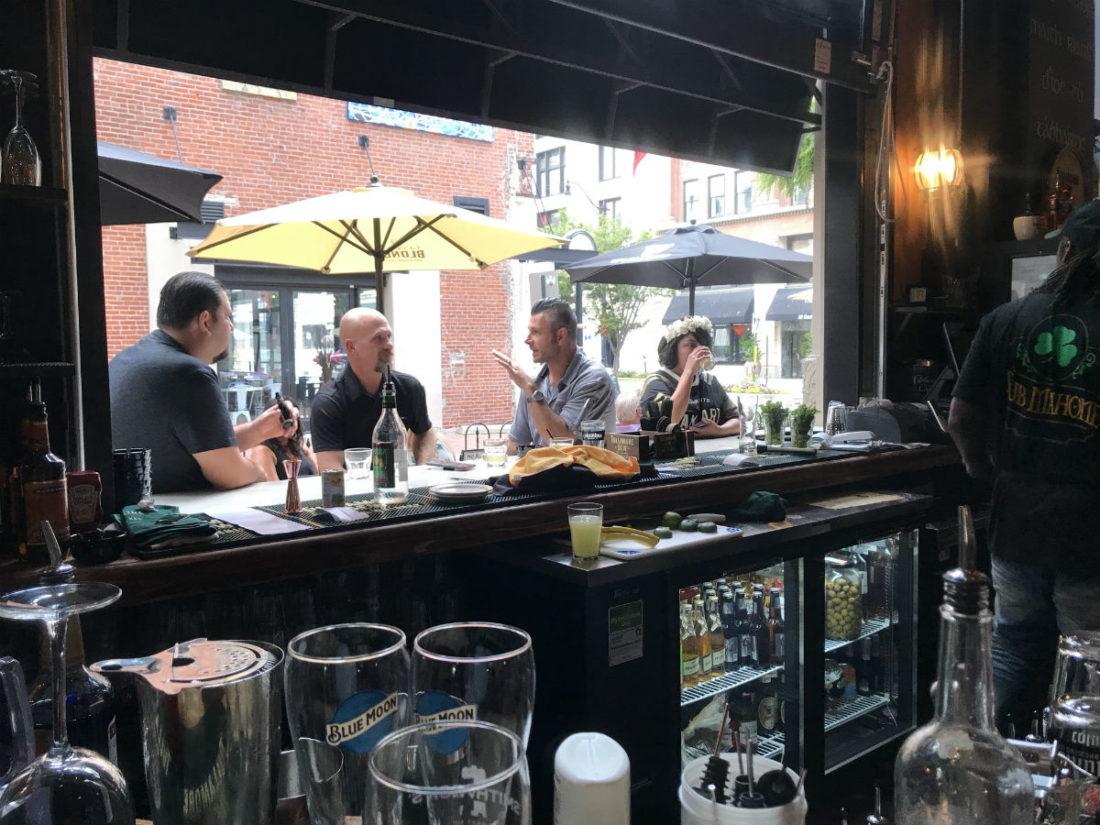 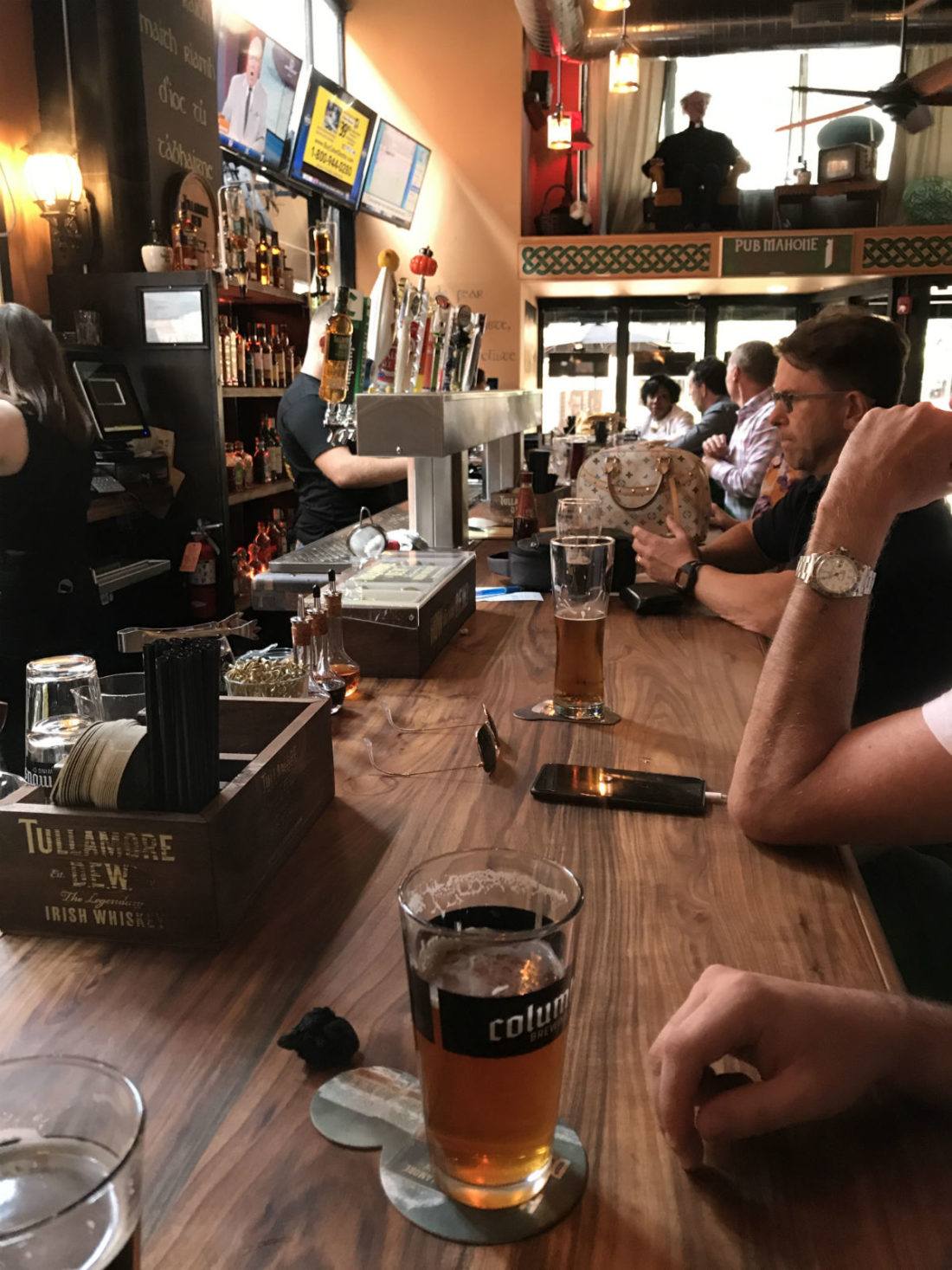 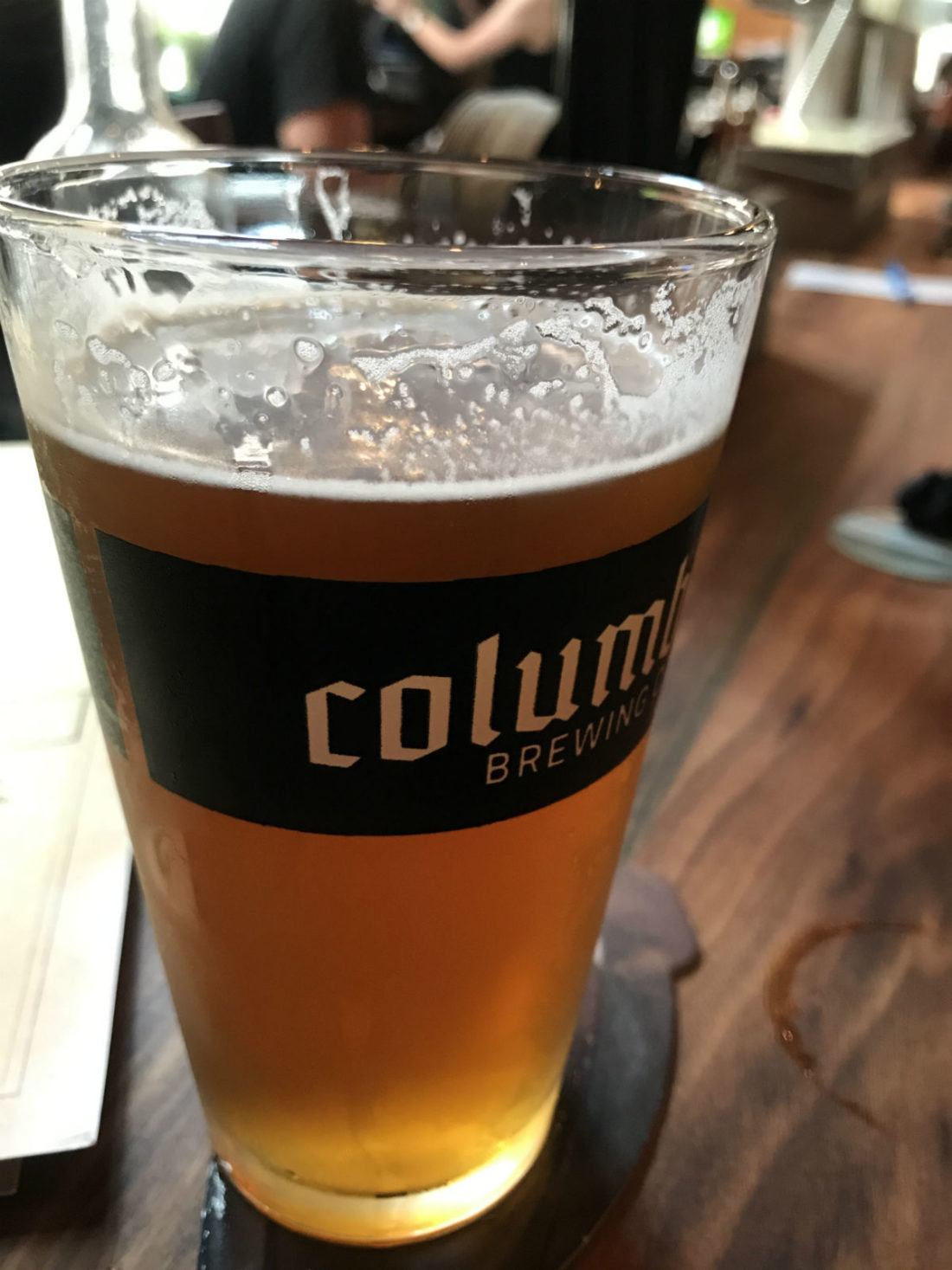 All in all, I appreciated the decor and the servers were friendly and amiable.

The whole place insists on its Irish heritage, but it does so with no apologies and with no filter. This wasn’t a prim and proper establishment, it was more of a “ruffled collar with your hair down” sort of place. It stares its own kitschiness dead in the face and growls a bunch of swear words at it. The perfect kind of place to sneak in a pint during lunch, or to go catch the game when you want to stretch your legs and your liver. It’s nice to finally have a place in the heart of downtown where you can walk in for some late night debauchery or a midnight snack, and maybe just catch a random Irish jig on the bar top.

Pub Mahone is open from 11 a.m. to 2 a.m. every day. For more info you can check out their Facebook page here.