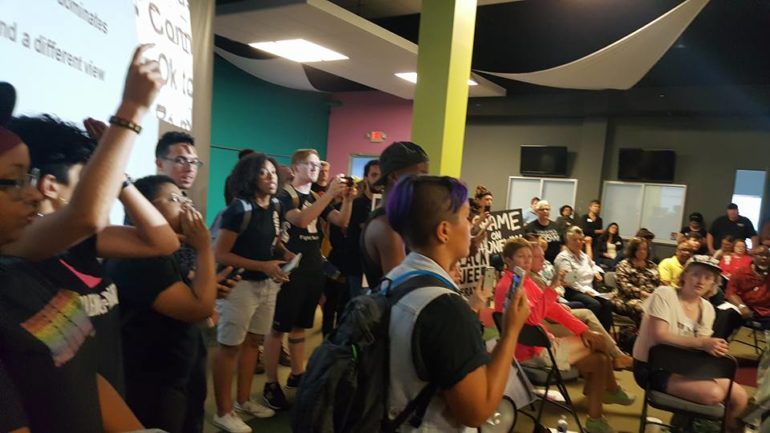 Dozens of protesters interrupted a Stonewall meeting aimed at discussing issues of race and homophobia.

The fallout from the Pride Parade protest continues to unravel as demonstrators stormed a community meeting headed by Stonewall Columbus yesterday. The meeting itself was aimed at discussing issues of racism and homophobia, a conversation seemingly brought to light by the recent actions of protestors.

“Stonewall should have done more, drop the charges on the Black Pride 4,” they chanted as they hijacked Monday’s assembly at the Northland Performing Arts Center. Organizers of the protest insisted that their own agenda be heard, demanding that Stonewall Columbus speak out about the alleged police violence at their Pride event and that Stonewall Director Karla Rothan resign from her position.

The #blackpride4 and supporters have taken the floor and mic, repeated attempts to silence them. pic.twitter.com/jPdadSvboF

These demands echo what former Stonewall Coordinator Lori Gum stated publically just after her resignation. “The inability of the executive director and SWC board to issue in six days an impactful and meaningful statement regarding the parade incident is unacceptable.” She goes on to state that she finds Rothan’s refusal to resign as offensive.

The incident all started when protesters attempted to halt last month’s Pride Parade, requesting a full seven minutes of silence in remembrance of Philando Castile and the many Trans people of color killed by violence so far this year. Police securing the event reacted by arresting the individuals, resulting in a scuffle between officers and demonstrators. Four were arrested, with one charged for allegedly attempting to steal an officer’s gun, an allegation that organizers of the protest outright deny.

Stonewall Columbus board members were shook when we got there lol a preview from tonight! #blackpride4 pic.twitter.com/SXN4a6swU4

While many see the protests as bothersome or unproductive, it’s undeniable that they have brought to the forefront issues that would have otherwise gone unaddressed. It is an unfortunate historical truth that whenever civil change happens, it is often times dramatic and inconvenient to the status quo.