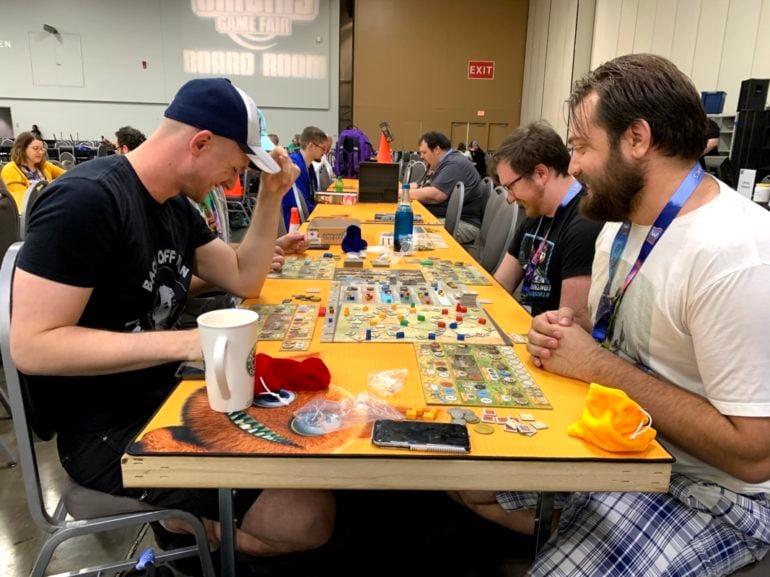 I became the King of Tokyo at Origins Game Fair!

I had so much fun at Origins Game Fair! I played tons of awesome games and took a few home with me as well. One of the highlights was definitely winning one of my favorite games, King of Tokyo by Iello Games.

My adventure started on Wednesday night went I went to discover the werewolves that were terrorizing our village in a few rounds of the game Are You A Werewolf? by Looney Labs. There are few games that I could play over and over again without getting tired of them, and this is one of them. Are You A Werewolf is a social deception group game. You are either a villager trying to discover the werewolves or a werewolf trying to eliminate all the villagers! I was a villager both games and unfortunately… I was eliminated both times and the werewolves won! 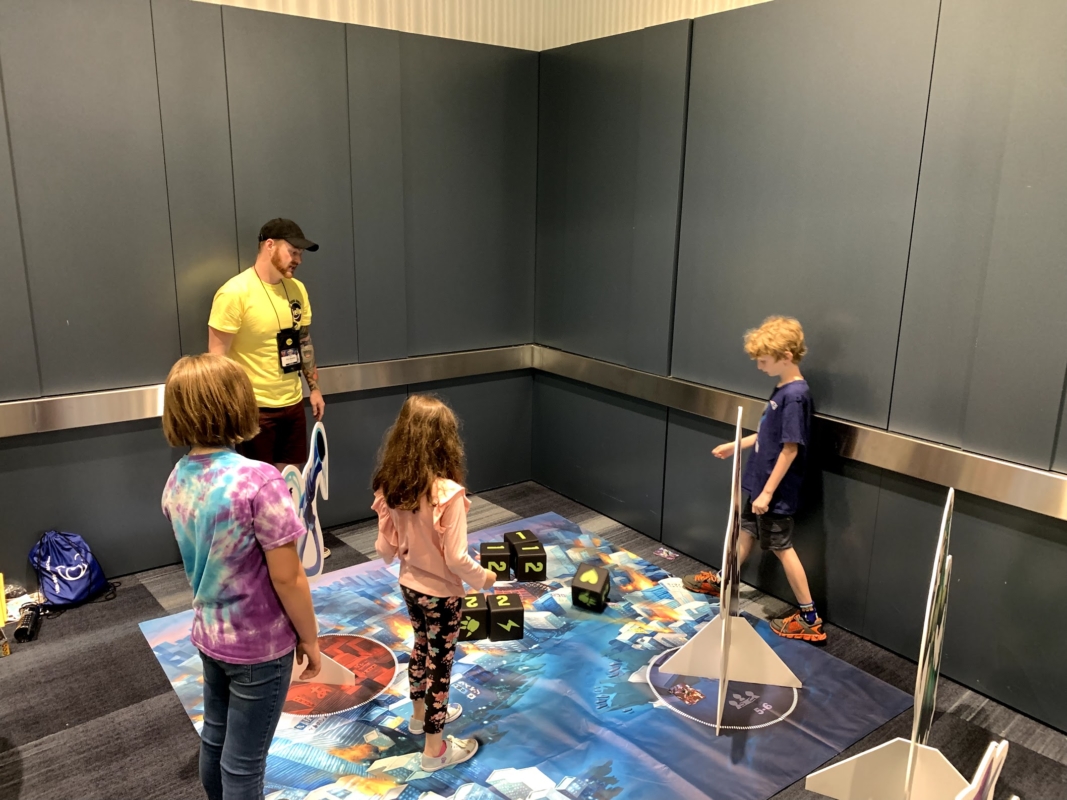 On Thursday, I started off the day with a game of giant King of Tokyo and as I already mentioned, I crushed it! This game is not usually played with four feet tall characters but at Origins, why not? I have the regular version at home but this was a different type of awesome. King of Tokyo is played with dice that help you attack your opponents and gain points. You win by either collecting 20 points or eliminating all other players, as I did! 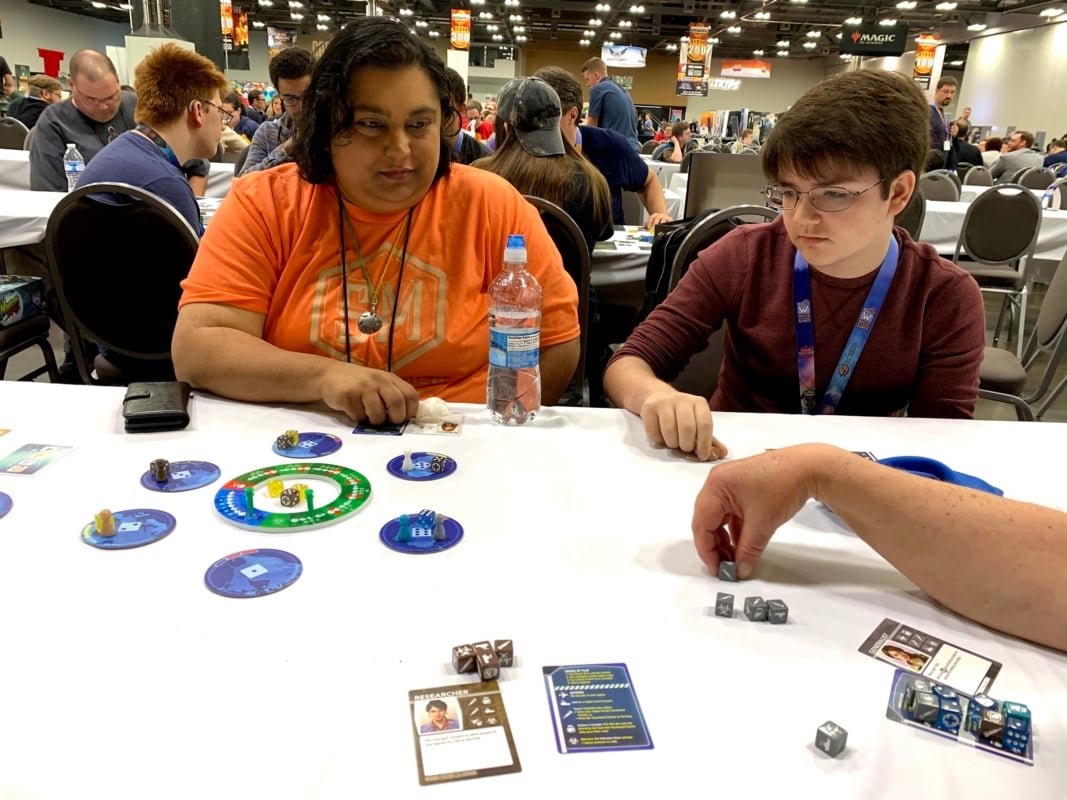 Later that day I played a new game called Pandemic: The Cure! by Z-MAN games. I had played the original Pandemic before but not this dice version. This is a collaborative game where you work with your team of researchers and scientists to cure all four diseases before they spread. I’m thrilled to inform you that we cured all the diseases and saved humanity!

Between my two scheduled games, I had plenty of time to wander around the rest of the convention and play demos in the exhibit hall. 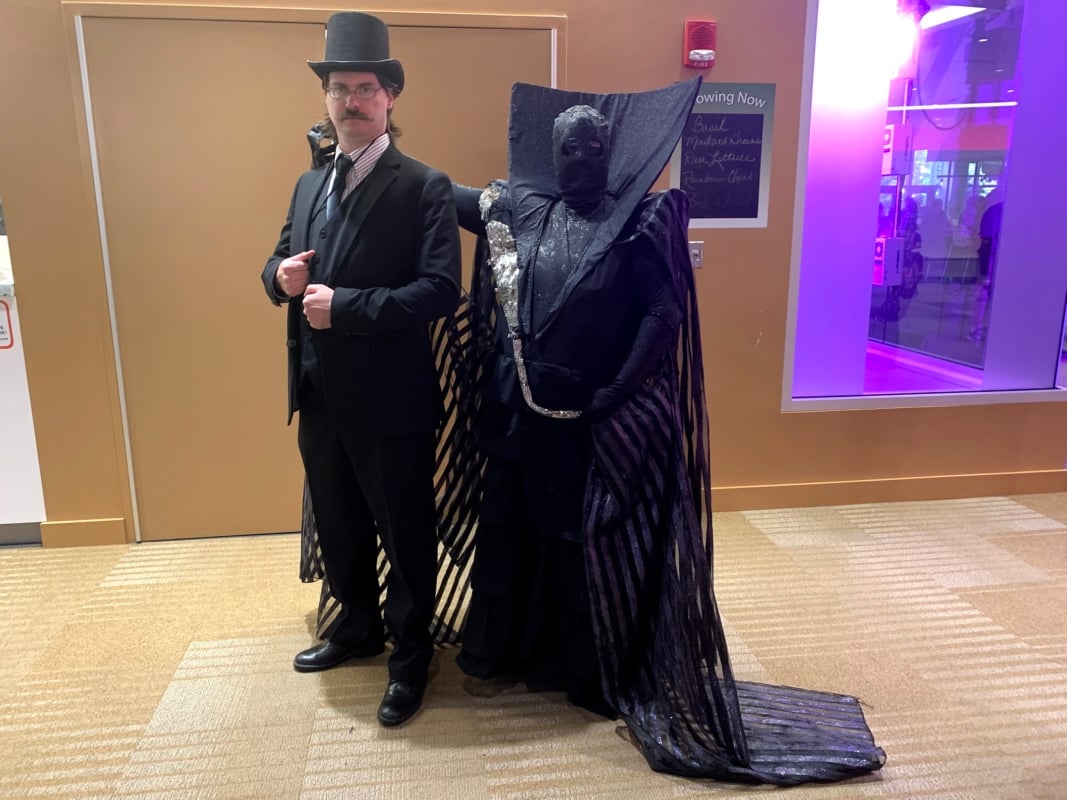 There were some awesome costumes and cosplay around! I didn’t dress up but I was super impressed by those who did. The giant Settlers of Catan game also looked super cool. 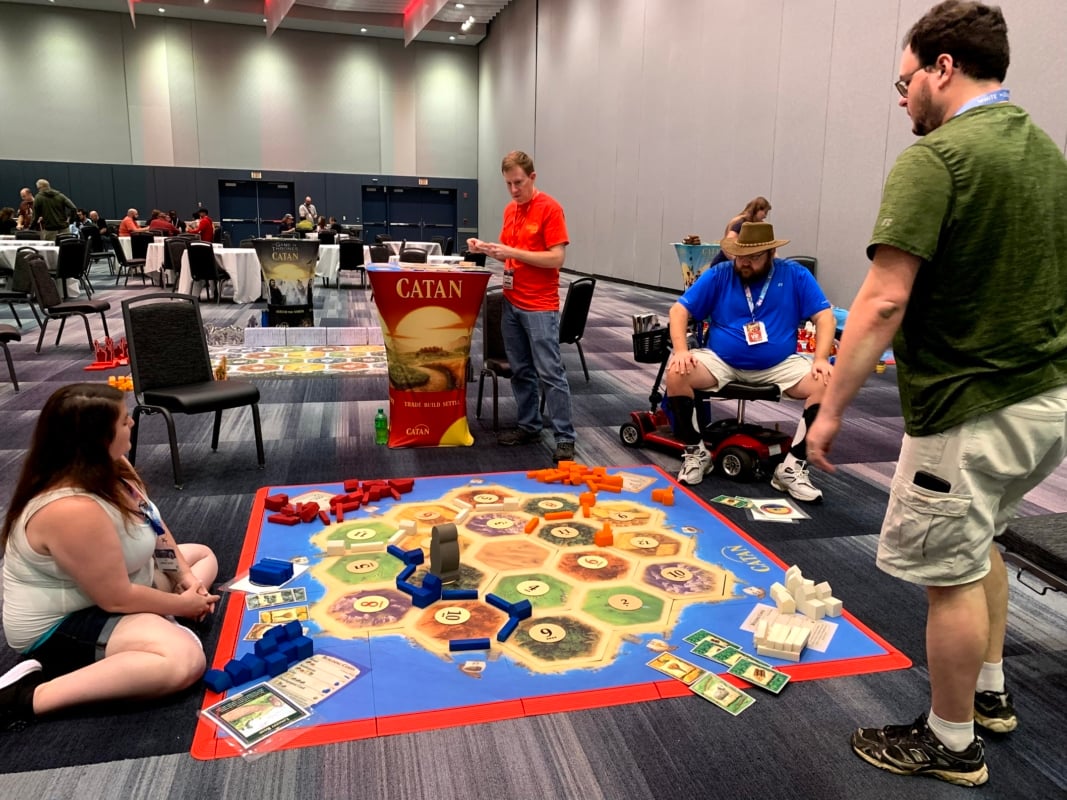 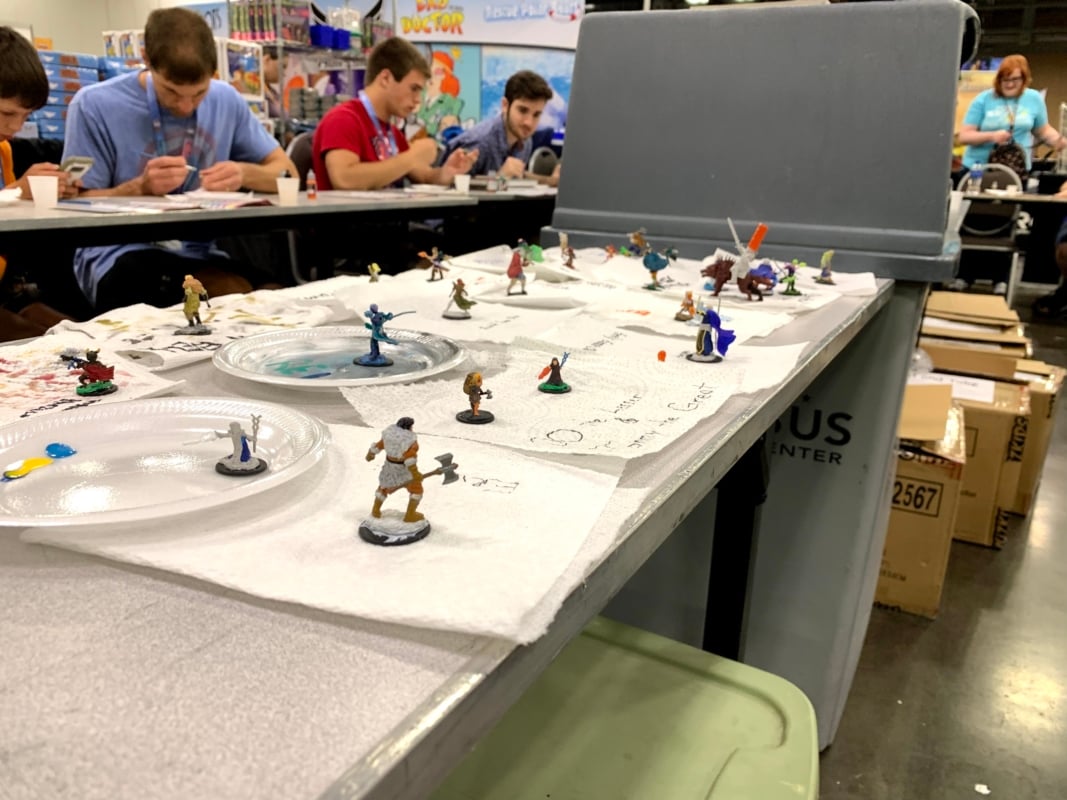 This was the first year I really spent time just looking around and I’m so glad I did. I popped into the video game room, the board game room, and saw some cool figurine painting! 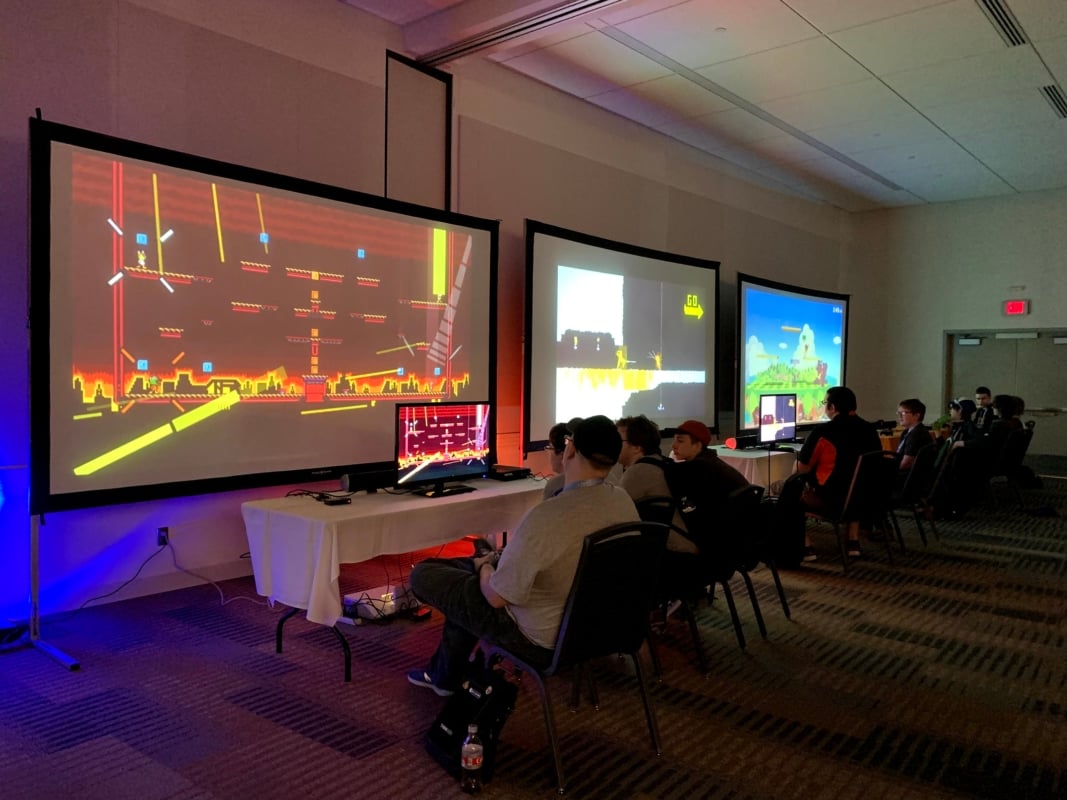 My dad and I spent Father’s Day morning at Origins as well and walked through the exhibit hall. We tried a couple of games and did some serious searching for a tiny Ant-Man figurine, or miniature as the pros call them.

One of the coolest games we played was Volcanic Isle by Arcane Wonders. This game is actually not even released yet! We bought it on site and even bought an extra for my grandparents. We played in three times after getting it home Sunday night! 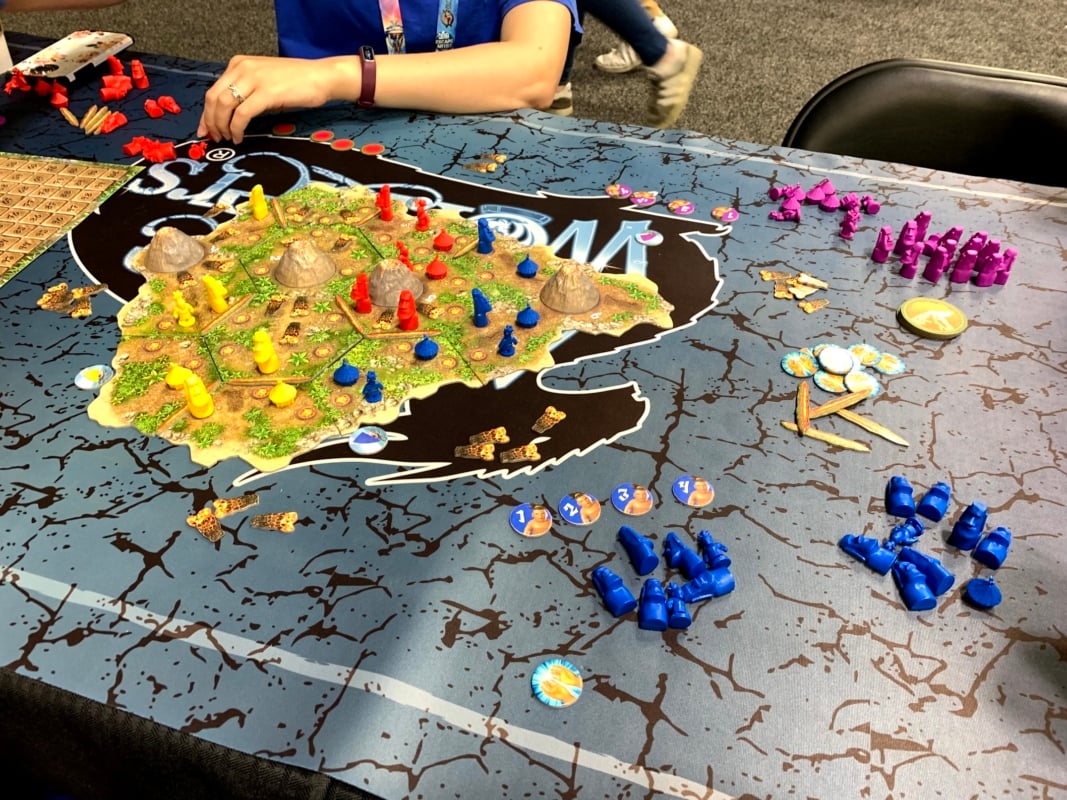 Another sweet game we played was Men At Work by Pretzel Games. They were sold out when we got there but we ordered it online as soon as we got home. Men At Work is a new take on a balancing game. You turn over cards that tell you whether to place beams or workers and whether or not they are carrying things along with them. Win by achieving “employee of the month” three times or by being the last players with safety certificates left (that’s how I beat my dad, Happy Father’s Day!)!

Overall, I had a blast at Origins this year. It was definitely a highlight of my summer. I can’t wait to come back next year! 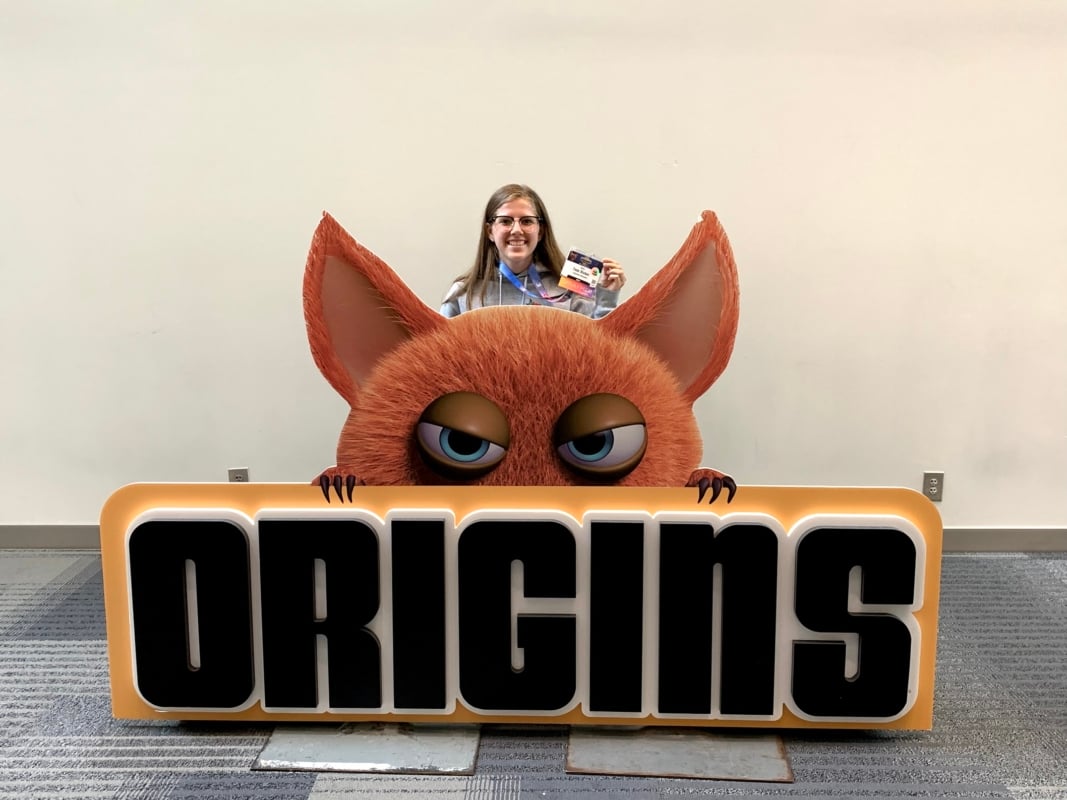 So who’s coming over to play all these games my family bought?