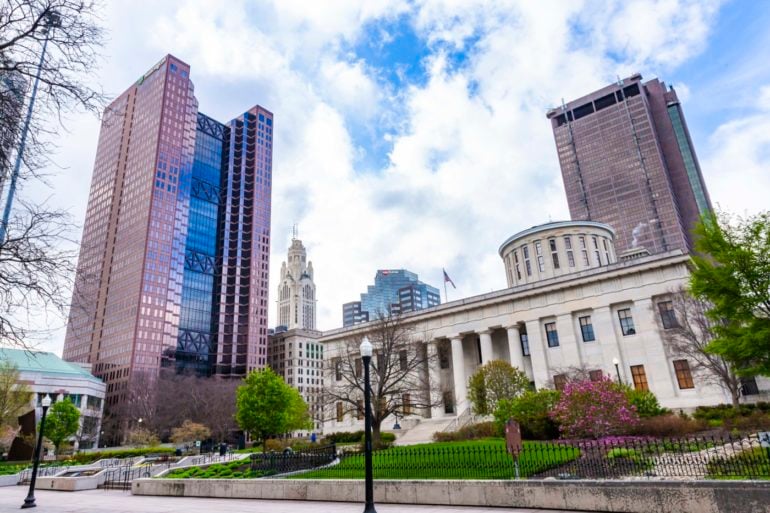 Ohio took a step closer toward a constitutional school funding model with the passage Wednesday of a two-year operating budget in the Ohio House of Representatives, a sweeping bill that also proposes an across-the-board income tax cut, a broadband internet expansion plan and more spending to aid businesses struggling from the pandemic.

Democrats took issue with certain portions of the budget, but its education funding reforms helped lead a dozen of them to ultimately join the Republican majority in approving the bill.

The budget now heads to the Ohio Senate, which will negotiate its own version over the coming months. Members of both legislative chambers will eventually hash out disagreements before a final version is sent to Gov. Mike DeWine for approval this summer.

“We are investing in Ohio’s priorities and Ohio’s future,” said Rep. Scott Oeslager, R-North Canton, who serves as the House budget chairman as he has for several previous budget cycles.

Oeslager said the ongoing pandemic has presented a wide array of challenges for Ohio, and the ongoing needs associated with the crisis are evident. He complimented House members for crafting a “balanced, responsible and truly meaningful” budget.

This budget does not include any federal spending from the American Rescue Plan. Speaker Bob Cupp, R-Lima, said Ohio has not yet received this relief funding and a forthcoming committee would determine how best to spend it.

Here are budget highlights as approved by the Ohio House of Representatives.

It has been more than 24 years since the DeRolph v. State decision was handed down by the Ohio Supreme Court, which ruled Ohio’s state funding model does not provide an equal opportunity for all students to learn and is therefore unconstitutional.

Lawmakers were tasked with determining a more equitable, constitutional funding model — something they have failed to accomplish in the decades since.

Cupp has led a renewed push to reform the funding system in recent years and said after Wednesday’s vote he was glad this budget achieves that goal.

The House-approved budget includes a nearly $2 billion increase in school funding, with most districts expected to receive more funding over the next six years. (A spreadsheet showing the funding estimates for each individual district in Ohio was published by The Columbus Dispatch.)

Cupp said he did not want to speculate on potential disagreements the Senate may have with this funding plan, but hoped there would be more productive conversations between members of the two chambers on this subject.

“We think they will agree that it is a very good plan going forward,” he said.

Detailed Ohio Capital Journal reporting on the education reforms included in this budget is forthcoming.

The budget includes relief spending to benefit a variety of Ohio businesses.

Millions of dollars would go toward helping entertainment venues, bars, restaurants and hotels. Additionally, there is a “New Business Relief Grant” program to specifically help those businesses that opened after Jan. 1, 2020.

Republicans also inserted a budget provision that would vacate all public health violations incurred by Ohio businesses since March 2020.

Businesses that have faced penalties for violating public health orders, such as not enforcing mask and distancing mandates, would have their violation records expunged. Any disciplinary actions currently in progress would be halted.

The state would be forced to repay any fines levied and reinstate licenses revoked. The Legislative Service Commission (LSC) estimates this would amount to $100,000 in fines repaid to health order offenders.

This provision mirrors a separate bill introduced by Republicans earlier this year.

Cupp defended this provision by saying Ohio businesses failed to abide by public health orders because the virus was an “unknown” phenomenon in 2020.

“The restrictions were new, they were different, and a lot of businesses sort of got caught up in this administrative web. As we work our way out of the pandemic, we think it’s important to take another look at (the violations) and to give them some sort of the benefit of the doubt…,” Cupp said.

Another main portion of the bill involves income tax cuts and deductions.

There is a 2% personal income tax cut for all earners, which LSC estimates would save taxpayers around $380 million in the coming two years.

“Once more, the wealthy and big businesses will fare far better than working families under this budget,” said Rep. Michael Skindell, D-Lakewood, who unsuccessfully proposed taking out the tax cut and diverting it to other priorities.

He cited data from the Institute on Taxation & Economic Policy, which was promoted by the think tank Policy Matters Ohio, which shows the tax cut would primarily benefit the richest Ohioans.

Those earning under $40,000 per year would receive virtually no benefit from this tax cut, the study found. Ohioans earning between $40,000-61,000 per year would see their taxes cut by an average of $7 over the course of an entire year.

The top 1% of Ohio earners, those making more than $490,000 per year, would comparatively see their taxes cut by an average of $612 each year.

Skindell said the tax cut shows a “huge disparity and continues the tax shift in this state.”

LSC estimated this provision may cost the state tens of millions of dollars per year in income tax revenue lost.

Ohio lawmakers have worked toward a bipartisan effort this year of expanding broadband internet access in the state.

With several bills already progressing toward that end, lawmakers opted to include the proposed “Ohio Residential Broadband Expansion Grant Program” in this budget.

The budget allocates $190 million over the next two years toward grants to pay for new broadband expansion infrastructure projects.

Other pieces of the budget

Here are some other noteworthy provisions from the budget bill:

The budget does not include several major proposals from the governor, including gun safety reforms and a $50 million public relations campaign for Ohio.

This article from Ohio Capital Journal originally appeared on April 22, 2021 with the headline Ohio House passes state budget; here’s what to know.