Ohio Congressional Map To Be Redrawn After Decade Of Gerrymandering 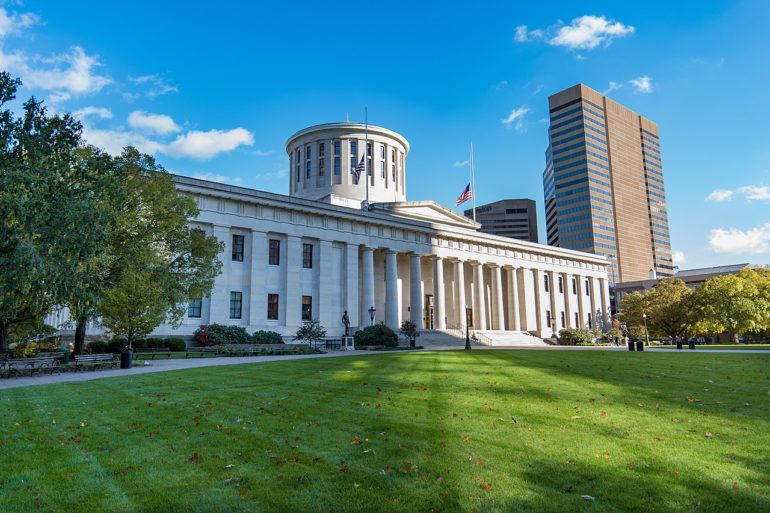 Democrat Shannon Freshour’s campaign against U.S. Rep. Jim Jordan, R-Urbana, began with a viral announcement and she stayed in the spotlight for the year to follow.

Republican Christina Hagan, running against U.S. Rep. Tim Ryan, D-Niles, got an endorsement tweet from Donald Trump. The president even shared Hagan’s campaign donation page to his millions of followers.

In the end, all of Ohio’s 16 congressional races resulted in the incumbent winning another two-year term.

The 2020 election marked one last victory for a gerrymandered Ohio congressional map that has bedeviled challengers of both political parties. Incumbents typically hold advantages in name recognition and campaign fundraising, but a decade of mostly lopsided victories shows a broader factor at play: an unfair map featuring deeply entrenched legislative districts.

The map retires after five election cycles without a single district ever flipping from one party to the other.

It debuted in 2012, with the 16 seats then up for reelection in 2014, ‘16, ‘18 and ‘20. The map never once changed. Incumbents never once lost. In the few cases when a lawmaker retired or left the seat, the controlling party always maintained control.

The map will be redrawn following the 2020 U.S. Census results. It is expected that Ohio will lose a district, as other states have grown in population at a much larger rate over the past decade.

Much attention will be paid to the redistricting process. This effort will come after a federal court ruled in 2019 the now-retired map was drawn “to disadvantage Democratic voters and entrench Republican representatives in power,” WOSU reported.

The 2020 election results are still unofficial, with additional absentee and provisional ballots yet to be counted. The margins, however, are large enough that the results are not in doubt.

In the four election cycles from 2012 to 2018, Republicans averaged 55% of the total Ohio vote compared to 44% for Democrats.

Each year has resulted in Republicans holding 75% of the seats, or 12 of the 16 available seats.

The unofficial 2020 tally is in line with those earlier years: Republicans have earned 56% of the vote to Democrats’ 43%, with many more votes still to be counted.

By virtue of how the map is drawn, Ohio’s population centers that tilt toward Democrats are nevertheless represented by Republican lawmakers.

Take Franklin County. The unofficial results show the county, anchored by the state capital of Columbus, went for Joe Biden over Trump, 65% to 34%.

Combined, 62% of voters in Franklin County voted for Democratic congressional candidates and 38% of votes went to Republicans. (Additional absentee and provisional ballots will likely widen this gap even further.)

The county is split into three separate congressional districts and is included with many other surrounding rural communities, which are more Republican-leaning.

In sum, around two-thirds of Franklin County voters went Democratic. But two of its three congressional seats are held by Republicans.

The same dynamic is true in Hamilton County, home of Cincinnati. The county went 57% to 41% in favor of Biden. It is split into two congressional districts, with the combined vote going 54% for the two Democratic candidates and 46% for the Republicans.

Despite that, Hamilton County will be represented in the next term by two Republicans.

The redistricting effort begins in 2021. The state legislature will consider a draft of the new map and must have 60% approval — including half of the minority party.

There are additional steps taken if the legislature cannot agree on the map. A smaller commission of elected officials would then try again, with a bipartisan agreement again required.

The new congressional map goes into effect for the 2022 election cycle and will be in place for the decade to follow.

This article originally appeared on Ohio Capital Journal on November 10,2020 with the headline, Ohio congressional map to be redrawn after decade of gerrymandering.