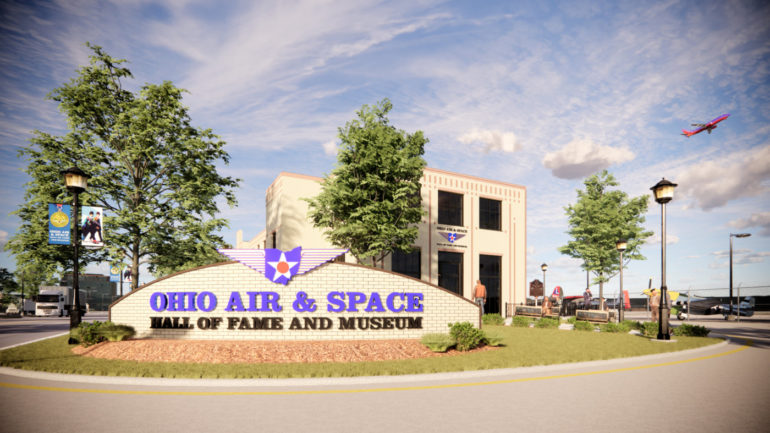 via The Ohio Air & Space Hall of Fame and Museum Facebook

It’s always exciting to hear about a historic Columbus building that’s getting a new purpose instead of being demolished.

That’s especially true since today we’re talking about the 1929 Port Columbus Air Terminal. This historic building harkens back to art deco days gone by and it’s incredible that the terminal will see new life as the Ohio Air & Space Hall of Fame and Museum (OAS).

Last fall, OAS announced their plan to renovate the terminal into a new home for their interactive exhibit hall, learning center, and event space.

The terminal is over 12,000 square feet with three levels and the old control tower. The terminal and an additional 1.7 acres around it are part of a long-term lease with the Columbus Regional Airport Authority.

The site of the terminal was chosen by famed pilot Charles Lindbergh in 1928 while he was serving as technical committee chairman for Transcontinental Air Transport. The terminal opened in 1929 and served as the easter terminus for Transcontinental Air Transport. By the 1950s, a modern terminal was built at what is now John Glenn Columbus International Airport. The historic building was converted into office space in the 1980s, but it’s been unoccupied since the 1990s.

The terminal will serve as the home of the Ohio Air and Space Hall of Fame and Museum which will offer free exhibits honoring air and space pioneers from Ohio. There will also be a STEAM education center onsite as well as rentable areas for meetings and events. The facility is expected to open in late 2021.

The STEAM education center is a collaboration between OAS and The Ohio State University. OSU has a long history of involvement in aviation and together with OAS, they’ll offer AvSTEAM programming with the goal of bringing awareness about aviation to K-12 students and the community. The program will focus on how science, technology, engineering, art, and math relate to aviation.

“With Ohio State Aviation celebrating its 100 year anniversary in 2017, it only makes sense that we work together to preserve history, and promote the new age of aviation in front of us,” Strzempkowski commented. “The location of the Hall of Fame encapsulates this by saving a historic landmark, and in turn allowing children to explore the science of aviation and encouraging them to pursue education and careers in the industry.”

OAS released a video, detailing the big plans they have for the building. The presentation features a plan created for the OAS by the architects and designers at Moody Nolan. In the video below, you can see both the interior and exterior changes that are planned for the terminal.