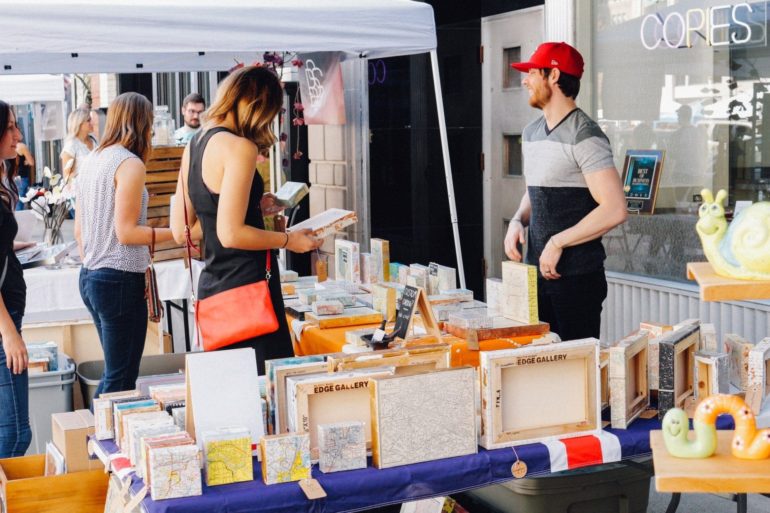 Navigator Weekender: The 14 Best Things To Do This Weekend Including Columbus Food Truck Festival, 614 Reduction Sale, and Sunlight Market

Summer is ending, school is starting, fall should be coming… but Columbus is still rockin’. Enjoy your last few weeks of summer, Columbus! Here are the 14 best things to do this weekend.

What: The Night Market at North Market wants to create a European style market with a carnival-like atmosphere. There will be a variety of foods, shopping, bars, and music. Trapped Columbus Escape Room will be there with interactive escape activities as well! Admission is free.
When: August 17, 6 p.m. to 9 p.m.
Where: The North Market

What: The 44th Annual International Taste of Columbus will highlight Middle Eastern culture to celebrate the diversity of Columbus. The fundraiser for US Together Columbus will feature cultural contributions from countries including Afghanistan, Iraq, and Syria. Check out their visual art, henna, cuisine, and more. There will be a silent auction, authentic ethnic food, and entertainment!
When: August 17, 5:30 p.m. to 9 p.m.
Where: Amelita Mirolo Barn

What: The Columbus Food Truck Festival is back again for another great year. There are over 50 food trucks and two stages of live music. Admission is free and prices for food vary upon the vendor.
When: August 17 & 18
Where: Bicentennial Park and Scioto Mile

What: The Call of Duty World League Championship presented by Playstation brings in the worlds best E-sport gamers. The event is general admission and tickets are $50. Anyone under the age of 16 must be accompanied by an adult.
When: August 17-19
Where: Nationwide Arena

What: Folk band Birdtalker will be at the Basement this weekend. This is the first spot of the tour for their debut album ONE. Tickets are $12 in advance, $15 at the door.
When: August 17, 7 p.m.
Where: The Basement

What: This dog-friendly festival is every dog-lovers dream. There will be paths to wonder with your pup as well as ponds to splash in. While you mill around you can visit a variety of booths with dog-related products. Admission is free! Chelsea has more details for you here.
When: August 18, 10 a.m. to 4 p.m.
Where: Prairie Oaks Metro Park

What: The 12th Annual African Village Arts Festival is a salute to Aganju. There will be several ways to experience African cultures such as music, poetry, art, and dance. There will be a community mural painting, art workshops, food, and vendors.
When: August 18, 11 a.m. to 7 p.m.
Where: African Village, 1270 Bryden Road

What: Head down to the McConnell Arts center for an evening of music, art, appetizers, and wine. Local artists have donated pet-related artwork to be auctioned off in support of Friends Of The Shelter. There will also be dogs available for adoption!
When: August 18, 6:30 to 9:30
Where: McConnell Arts Center

What: CrestFest is a Clintonville street festival with loads of live, music, children’s activities, vendors, and food trucks. There will also be a live raffle! Children’s activities include crafts, inflatables, Youth Stage, Youth vendors, Skateboard Area, free face painting, and free popcorn/snow cones.
When: August 18, 12 p.m. to 9 p.m.
Where: Crestview and Tulane between East and Calumet, in South Clintonville

What: The 614 Reduction Sale is a giant warehouse sale with some of the most well-known and loved businesses around Columbus. Gain early access at 9 a.m. by donating $10 for support of Flying Horse Farms. For a full list of businesses click here.
When: August 18, 10 a.m. to 4 p.m.
Where: Edgework Creative

What: The 29018 Lancaster Brewfest will feature over 20 different Ohio breweries and cideries, as well as, live music from Forcynthia, Dan Orr, and PopGun. There will also be food trucks such as Bob’s Backyard Barbecue, Empanadas & More and Bee Pops. General admission tickets are $35 and designated driver tickets are $15.
When: August 18, 6 p.m. to 10 p.m.
Where: Historic Downtown Lancaster

What: The Sunlight Market is a street market in downtown Columbus featuring a variety of vendors and pop-up shops. There will be street musicians along the way as you stroll the market and local bars will have a variety of drink specials for the day.
When: August 19, 11 a.m. to 3 p.m.
Where: Gay Street, between High Street and Fourth Street

What: Join Modo Yoga Columbus and the Columbus Clippers for Yoga Day at the ballpark. For just $20 enjoy a 60 minute Modo class on Center Field and a 4:05 PM game in reserved seating to watch the Columbus Clippers take on the Syracuse Chiefs.
When: August 19, 11 a.m. to 8 p.m.
Where: Huntington Park