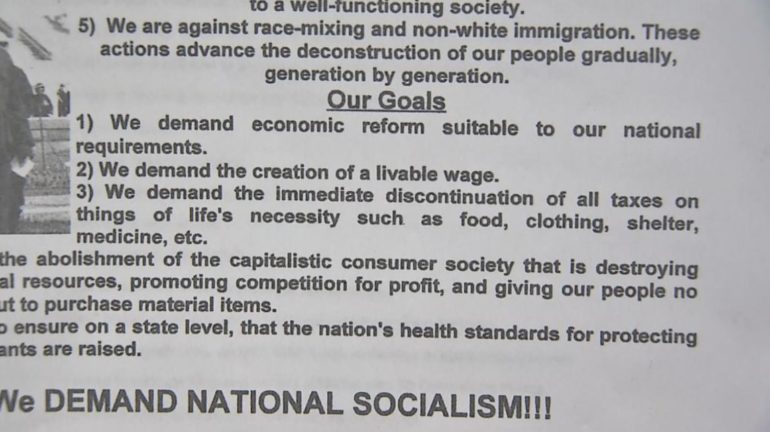 The National Socialist Movement dispersed a slew of hateful business cards and flyers throughout the neighborhood of Clintonville over the weekend.

According to NBC4, “Save our land! Join the klan!” was one of the many messages stated in the propaganda.

The National Socialist Movement was founded in 1974. They call themselves a “white civil rights group,” but let’s be honest—they’re a hate group.

The Southern Poverty Law Center, a non-profit organization monitoring the activities of domestic hate groups and other extremists, says that “[t]he NSM is probably best known for carefully staged protests, carried out in full-blown Nazi uniforms and swastika armbands.”

In 2005, the NSM was behind a huge riot that broke out in a predominantly black neighborhood in Toledo, Ohio. The white-supremacist planned to march through the neighborhood of Polish Village to protest the black residents living there. The NSM was met with counter-protesters and things turned ugly. In the end, the riot cost the city more than $336,000.

This incident over the weekend in Clintonville isn’t the first time a white supremacist group has tried to gain followers in the Columbus area. In fact, the Klan has been targeting our state in a search for new recruits.

Cleveland.com noted that universities are one of the main targets of the hate groups, and The Ohio State University is no exception. The Tab, a university news network run by students, reported that supporters of the Alt-Right Movement posted the fliers on a bulletin board in Hagerty Hall on OSU campus in November. This group is known for white supremacist ideals.

But these racists are coming to Columbus to recruit, right? They can’t possibly from Central Ohio! Wrong.

A man named Andrew Anglin, who is a Worthington native, is the editor of the Daily Stormer. This publication is the world’s most-visited white supremacist website, and Worthington residents have protested against the Daily Stomer. Anglin has often used the phrase “WWHD?” in his writings which stands for: What Would Hitler Do?

While some Clintonville residents thought it best to ignore these hateful statements from the National Socialist Movement, others have taken action to speak out against it. Regardless, most agree that this sort of speech is not okay and will not tolerate such hate in their neighborhood.

Disgusting – Nazi hate has no place in Columbus https://t.co/qwd52GNEgS

Why on earth did white supremacist scum think Clintonville was a good place for their stupid flyers? How stupid can those racists be??? 😑🤔 https://t.co/cj5U02BrmQ

Of course, there is always that “one” guy.

Your flyers have nothing to do with hate. Those Clintonville residents are ignorant and stubborn. The NSM is awesome. They're true patriots.

Although whoever passed out these flyers is entitled to freedom of speech, so am I. And so is everyone else in this city who finds this behavior unacceptable.

As a resident of Clintonville, I am proud to see my neighbors standing up and speaking out against this hatred.