“Friendship is Magic!” He squealed.

His eyes were lit up with a certain fanaticism that you only see in the arena of people who love Ohio sports and/or Rock On The Range, except his demeanor was actually congenial, nice even. His right hand shot in the air for a high five and only a sociopath or a monster couldn’t meet a physical gesture that enthusiastic. So yes, I high fived the kid. It was probably my fifth random high five of the night and more than likely the most high fives I’ve given to a stranger in succession outside of a Flaming Lips concert.

He whooped and hollered afterward and jumped excitedly into a throng of other overly excited twenty to thirty-somethings, all in colorful rainbow apparel. All of whom bobbed and boogied, jamming as free and uncoordinated as they could to heavy electronic music. We were all in a dark mess hall of a “only sort of” willing hotel chain. Every Zima and Pear Cider in the western hemisphere was in one room at the same time. This, my friends and spectators, was an actual Brony convention in actual Columbus. And, honestly? It was kinda lit AF. 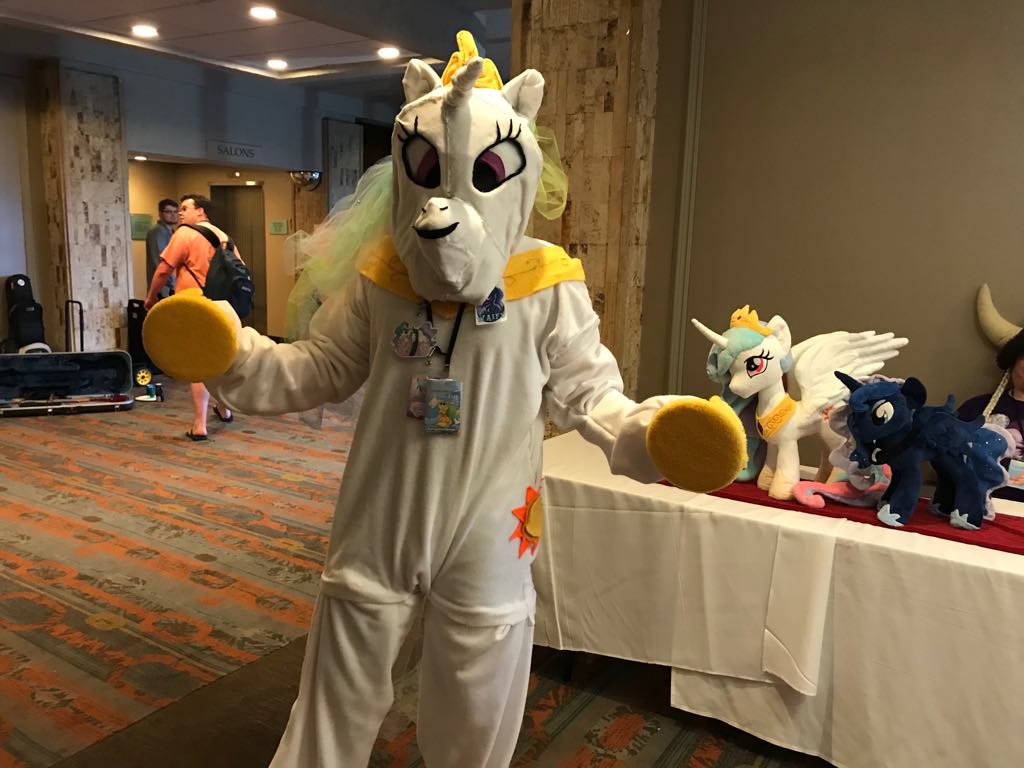 But let’s rewind a bit.

A couple weeks ago or months (because time is a thing?) I received an email from my editor. The email was simple. A curious but stated request with a link to an event. “Any interest in covering this?” The link was to Trotcon 2018, held at the Crowne Plaza in Worthington. My knowledge of Bronies was admittedly superficial. Adult dudes who love My Little Pony. Also, I have a strange fascination with all things either macabre or weird, bonus points for both. So, yes, I mashed that reply button quicker than Rainbow Dash can successfully execute a Sonic Rain Boom (more on that later… or not, actually, naw, probably let’s not).

And I find myself in the hotel lobby of Worthington’s Crowne. The first thing I did was B-line it to the gift shop. Not gonna lie, maybe kinda/certainly the weirdest introduction into the culture. The first thing I saw was the body pillow cases. Fitted sheets with (and I was prepared for something like this but, like, naw) sexually suggestive images of each of the Pony characters lying in a cushy bed-like background. Hey, to each their own. It’s not like I own any Gilmore Girl posters or have ever had a life-sized cut out of DMX at my birthday party (…).

The gifts and merch-grabs tailored itself to the fan base. Sure you had your super sexy anime keychains but you also had complete Pathfinder deluxe play settings that let you role-play within the universe of My Little Pony. You had cartoon smut lined up next to some (admittedly) cool looking figurines and Fallout: Equestria Fanfiction. But all of it was accepted and consumed by everyone here. It may not have been each person’s specific thing but no one questioned it, no one judged. Sure they were all a nervous and sweaty mess but they shared a mutual interest, they just expressed their fandom in differing ways.

And that’s the one thing I was really beginning to understand as I left the gift shop and strolled down corridors filled with cosplay and curios.

This wasn’t just one subculture. It was a beehive of self=identification. You had the usual suspects: the anime fans, board game kids, and costume fanatics. But you also had cliques of folk who, by every known power of observation and judgment, had NO business there. I’m talking Military Fan Boys, Metal Heads (one kid literally sat in the hallway for hours wailing out guitar licks and laying down some crazy technical finger picking), Furries, the devoutly religious, EDM Heads, the woefully transparent drunks, and even parents accompanying their children. Yes, actual children were scattered throughout the whole event. And everything was fine. No one was weird (context) or rude or anything of the sort. In fact, it was really just the opposite.

Everyone was ecstatically happy. Happy to see each other, strangers or not. Happy to dance, happy to sing. Happy to parade around as a six-foot muscle jacked horse full of friendship and high powered charisma. And it was infectious. I don’t mind admitting, dear reader, that I can sometimes come off… curmudgeonly (*hold for collected gasps*). But by the time I had made it to the rave room (yeah, there was a friggin rave) a little bit of their light had rubbed off on me. I let my guards falter. I embraced a bit of their own levity and let the brightly colored lights do their work on my hippocampus.

By the time I got to the arena of pulsating sound the first DJ, JesusKidz (not making that up),

Had finished up his set and was leaving the stage. The second DJ set up shop and played and everyone jiggled frantically, but in organized columns. Everyone respecting each others space while recognizing each other’s presence and generally enjoying the communion.

I made my way around the edges of the conference room.

Here some people sat in chairs lining the wall. They were content to sit and watch the others, smiling all the same. I struck up conversations with the few that made eye contact. Some were happy to converse, others were shy, and still others were obviously unaccustomed to speaking with strangers but were more than willing to try. A large part of My Little Pony’s fan base are adults and children that also identify on the autistic spectrum. It’s not just the idea of brightly colored ponies that solve problems with magic that attracts them: it’s also the lessons they glean about friendship and empathy. It’s the welcoming community of people that are as open and accepting of race and sexual orientation as they are of neurodiversity.

And I can get behind that.

It’s easy to strut into someone else’s playground and judge their fun. The real challenge is opening yourself to learning something from them. For some people friendships are easily won. They’re a given. If you have a hard time making friends the world usually says ‘tough luck, maybe don’t be so weird.’ But to struggle so hard for something that so many people take for granted? That so many people seem to earn effortlessly? For something so crucial and necessary to the human psyche and condition, and to still fight for regardless of how the world sees you? That’s strength. THAT’S nothing short of remarkable. And witnessing that strength really makes you examine the people and relationships you have in your life.

The wee hours of the night came fast and unexpected.

Because time is dumb and it doesn’t care about the experiences you’re collecting (ugh, time, again). It trots along endlessly while you play a game of catch up you are ill-suited to ever win. Despite the many (MANY, I did “research”) instances of time travel in the My Little Pony universe, we don’t have sway over time and it isn’t a very forgiving broker. But what we can control is how and who we spend that time with. If there exists any magic within friendship itself, it’s that thing that happens to our hearts when we spend time with others and they choose, in turn, to spend that same moment of time with us as well.

So yeah, friendship is friggin’ magic you guys.