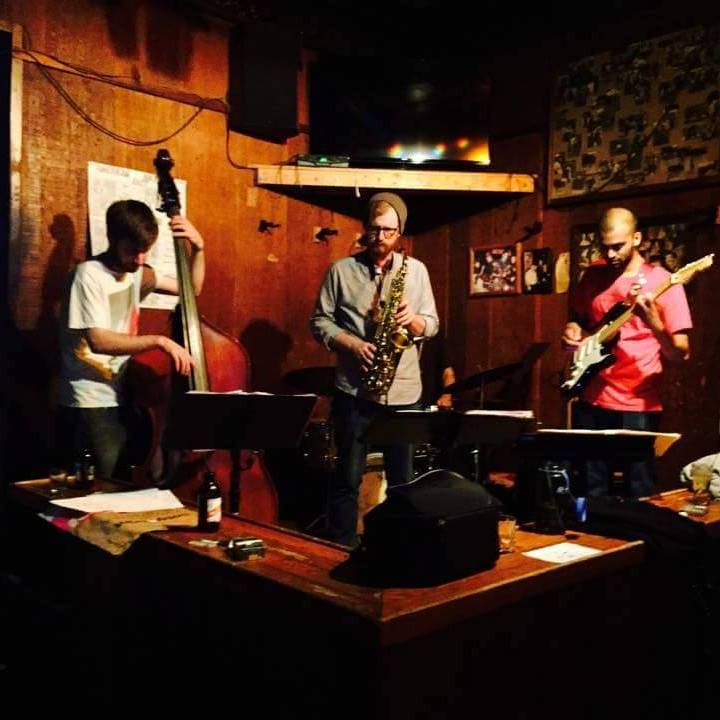 Local Band, Insane Jazz Posse, Wants To Challenge Everything You Think You Know About Jazz Music

Insane Jazz Posse is one demented jazz quintet, bent on turning the local music scene on its pretentious head.

Every tune starts standard enough. To the casual observer, it would almost seem like they’re at a normal jazz show. The crowd smiles pleasantly as the band eases comfortably into a jazz rendition of a familiar yet trendy pop song. Before long, the tone abruptly changes. What they thought was just another bubblegum drop is now a crescendoing sadness. Suddenly it sounds like a top 40 radio track had too much to drink on a Tuesday night and is now completely rethinking its life (think Katy Perry’s Fireworks meets Fear and Loathing in Las Vegas).

What you’re listening to is Insane Jazz Posse, a local jazz quartet that lays down some of the dopest, most erratic, jazz licks you’ll ever hear from any band in the city. I got to sit down with their bassist and throw some questions in his direction. With the exception of a few expletives that I had to carefully remove from the conversation, the mayhem that ensued was a lot like their music; One hundred percent, pure, unadulterated fun.

Where did the name Insane Jazz Posse come from?

After college, I worked at Hounddog’s pizza for a few years. I had this idea to start a “90s Rock Jazz Band”. Me and the kitchen crew would jokingly throw around 90s band names with the word “jazz” not so cleverly thrown in there somewhere.

My buddy Dom Camella came up with the name, which he likes to remind me of every time I see him out. YOU’RE FINALLY GETTING YOUR DUE CREDIT, DOM.

Who are the musicians that make up your band?

What are their backgrounds, previous bands, experience, etc?

I know we have all been playing our respective instruments since at least our teenage years if not earlier. We are all working with an absurd amount of bands in town. I’m not gonna bother telling you who plays in what but.G. Finesse and Black Eagle, Saftey Squad, Liver Quiver, Small Songs, Feilds and Planes, Danny Bauer Quartet, Zakk Jones’s Screeching Owl, Free Jazz Hit Parade. I think that’s most of them. It’s also note worthy that Alex will be at Dicks Den with a different band every Wednesday this month. They’re all going to be super dope, I would highly suggest checking him out.

In 300 words or less, explain why you think Miracles by ICP is the most amazing song ever.

I actually had to look this up. It sounds like [let’s just say he said awful]. I saw an interview with one of the ICP guys and they asked him something along the lines of “don’t you think your music is a bad influence on children?” to which he simply replied, “I’m a grown man that wears clown makeup for a living.” He won some respect points in my book for that.

When you’re not laying down hatchet man basslines or working, what do you do?

Well practicing, gigs, and rehearsal takes up most of my time. I grew up playing hockey and I still play beer league a night or two a week. It’s the most fun ever. I love it. The beer, the violence, the crap talk…. all of it.

I’ve been known to throw my weight around, I’ve definitely been thrown out of more than a few games.

When the head ref knows you by your first name, you know you’ve made a reputation for yourself. My mom actually refuses to go to games because she says I get too many penalties. Shouts out scumbag Army Of Darkness brethren. I like to cook too. I’m no master chef but I can sear the heck out of a steak.

Dick’s Den and Brothers Drake. There are not near enough GOOD venues in this town. Especially ones open to our weird music.

What venues do you especially like to play at?

Dick’s Den for sure. You always get 100% of the door with no funny business. Drinks are always free. Not to mention I think the general surliness of all the bartenders/bartendresses matches our general attitude.

Describe your sound, what kind of feel are you guys going for?

Well, I feel like the group has a lot of depth, sonically. It’s really easy to get caught up in the scales/chords/theory and I think sometimes musicians forget that you’re supposed to make the audience FEEL something. This group does an outstanding job of that. We sound kind of bipolar, it’s either extreme happiness or extreme depression with a dash of mania. All the players individually really put a lot of emotion into their playing, which is why I called them. More so, everyone does an amazing job at playing with dynamics which I think is also overlooked. My sound guy at the last gig, who is very well respected around town, said we play 20% quieter and 20% louder than the majority of bands he mixes around town.

I can tell all the guys are having a really good time because they get to play the stuff that they can’t get away with in other groups.

Go watch the videos, the band is laughing most of the time. Often times cats take themselves too seriously and forget to have fun. the audience doesn’t need a doctorate in music to tell when you’ve got a stick up your butt. It’s just vibrations and rhythm, don’t think about it too hard.

Why is MF Doom so overrated?

Doom is absolutely UNDERRATED, I think he’s just over a lot of peoples heads. I’m a firm believer in letting your freak flag fly. Also, a lot of people don’t know about all his alter egos. “operation; Doomsday” and “MMMMM food” we’re really the only albums under the name “MF DOOM”. To really get a feel for his library you really need to take all his projects into account. First of all, many don’t realize he was a founding member of KMD (Kausing Much Damage) who formed in 1988 in NYC at the height of the first wave of hip-hop. After a hiatus, he reinvented himself as MF Doom in 1997. Just a fat dude in a Dr. Doom mask spittin’ straight BARS, son.

(An argument about hip-hop ensues)

Are there any upcoming shows you want to plug?

Yes, we’re playing at a brand new spot “Two Truths” (1205 n High St) Friday, June 23rd. Super chill vibe, with super great people and spirits. We’re only a couple of blocks from Goodale Park, so all you Comfesters come pay us a visit!

Why should we check you guys out?

Why the [expletive deleted] not?

Watching them live is a sight to behold. Their hands hammering mercilessly at their instruments, looks of childlike maniacal joy in their faces. Cheering each other on, they egg on the lunacy and draw it out of each other. Each of them is an unchecked monster that somehow coalesces their sound together to create one brilliant, sardonic take on whichever top 40 pop tune they aim to strong arm. They’ll cover a Miley Cyrus tune, carve it up, leave all the pretty parts on the chopping block and only take with it the blood and guts and marrow of the song. What you’re left with is a gorgeous and gory mess that will leave you feeling joyfully uncomfortable.

If you’re looking for some insane music that definitely isn’t the friggin’ Chainsmokers, then look no further than the Insane Jazz Posse. For more info on the band and upcoming appearances, check out their Facebook page.