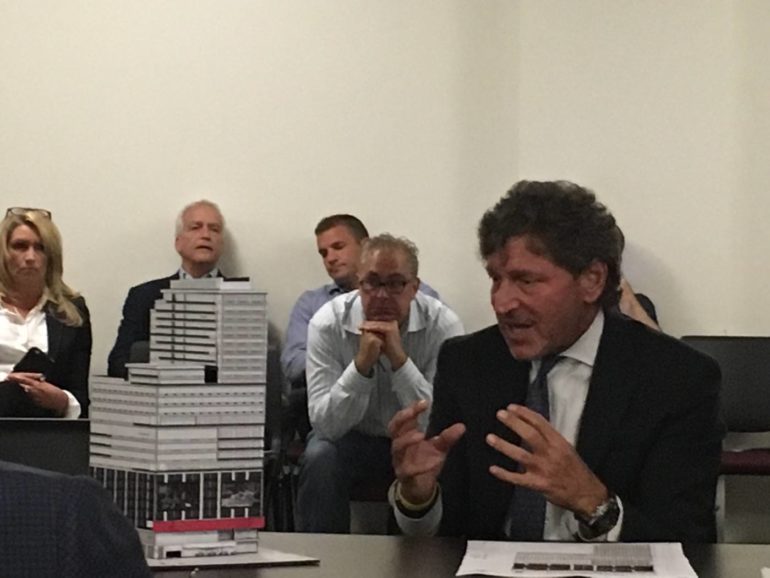 LED Video Advertising Has Potential To Hold Up Millennial Tower

Developer Bill Schottenstein, of Arshot Investment Group, returned to the Downtown Commission on Tuesday with a revised proposal for the 27-story Millennial Tower slated for a surface lot at Front and Rich streets in the RiverSouth District.

A plan to build Columbus’ tallest new building in decades is hung up over an electronic advertising display.

The latest iteration includes a one-story video board facing Front Street, significantly smaller than the striking six-story display originally outlined in May 2016.

Still, some commissioners made clear they would vote against any form of electronic billboard because development guidelines recommend against them. Tuesday’s review was still conceptual, meaning no vote was taken.

“If there’s an LED on this building, I will vote no on the project. Period. Amen,” Commission Chair Stephen Wittmann said. “I don’t want to see advertising, and I certainly don’t want to build advertising into a brand new building which I think, actually, is a very nice building.”

Since the project was unveiled last year, Schottenstein has lobbied for video advertising to both cover interior parking – on floors three through eight – and to help promote the building’s retailers and restaurants. No tenants have been identified, but Schottenstein said several retailers are waiting in the wings.

One commissioner expressed concern with making an exception in this case, only to have other developers pursue large video boards. The Downtown Commission guidelines say those boards are more palatable in the Arena District and on High Street, where Arshot already has one looming over the southwest corner of Capitol Square.

In the Millennial Tower proposal, portions of the parking garage not covered by the video wrap will have a metal screen. Schottenstein also is proposing static advertising for a portion of the metal screen along Front Street.
But he’s not inclined to give up on video advertising, which he says will better capture the attention of passers-by.

“We have to be looking forward, and this is where things are going. This is in every other city, this is what’s happening,” he said. “I want this building to be a great building 10 years from now, 20 years and 30 years from now.”
One commissioner lamented spending so much time discussing the one detail – “fingernail polish” – in an otherwise well-received project.

“But it’s not fingernail polish,” Schottenstein said. “Columbus is not walkable, we don’t walk as much as other cities. The idea is to create a situation that will get people to walk. The thing is, we trying to make it an interesting situation to get around. And we need to do it, because that’s what makes a healthy city.”