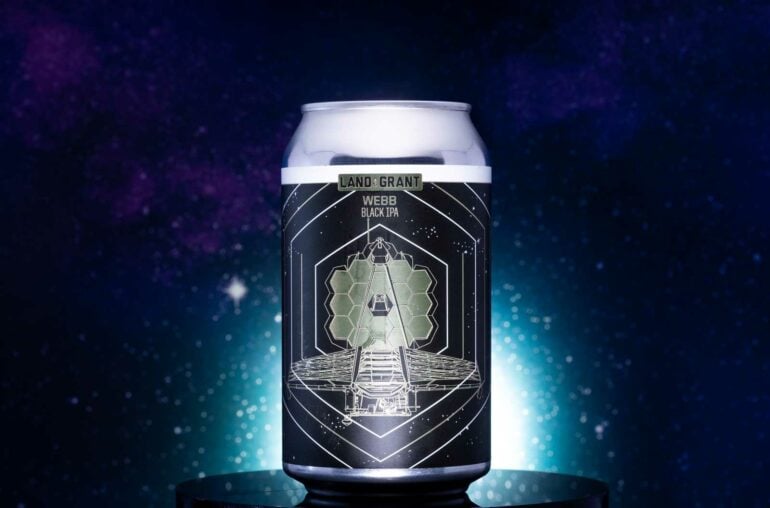 Thanks to Land-Grant Brewing Company, there’s now an easy way to celebrate two things I love: local beer and space.

The Franklinton brewery announced the ninth beer in their space-themed series of brews, the Webb Black IPA. Named in honor of the historic James Webb Space Telescope (JWST) that launched on Christmas Day, the beer is part of the brewery’s annual “Space Grant” series, which celebrates the spirit of space exploration and discovery.

NASA’s JWST is a massive achievement. It’s over 100 times more powerful than its iconic predecessor the Hubble telescope and it is going to tell us so much more about the secrets of space, including the birth of galaxies, stars, and planets.

Adam Benner, the President and Co-Founder of Land-Grant has had an affinity for space explorations since he was young, and he knew that they had to release a beer that celebrated the James Webb Space Telescope.

“I remember, as a kid, saving the front page of the newspaper when they published in color the Pillars of Creation from the Hubble Telescope,” Benner said. “We are all just as excited to see what new discoveries come from the JWST, so it was a no-brainer to honor it through this year’s Space-Grant beer.”

The beer is a black IPA, a deviation from past Space-Grant brews. Land-Grant Head Brewer Dan Shaffer did take some inspiration for the recipe from the 2017 Space-Grant release, Godspeed.

“Having done a coffee variant the last two years, we were excited to return the black IPA to its truest expression with this recipe,” Shaffer said. “The malt bill was based on my favorite Black IPA, and we paired Galaxy hops with Amarillo and Mosaic cryo hops in a stripped-down version of Godspeed’s hop schedule to create a lightly sweet and firmly bitter brew with tropical, citrus and cocoa notes.”

Space-Grant Webb Black IPA is available now at the taproom in Franklinton and in select craft beer retailers around central Ohio. The beer can be purchased online, but shipping is limited to Ohio. The beer comes in at 8.2% ABV and retails for $11.99/six pack.

You can also learn more about Webb on Land-Grant’s Beers with the Brewers Podcast, available to stream wherever you get your podcasts.