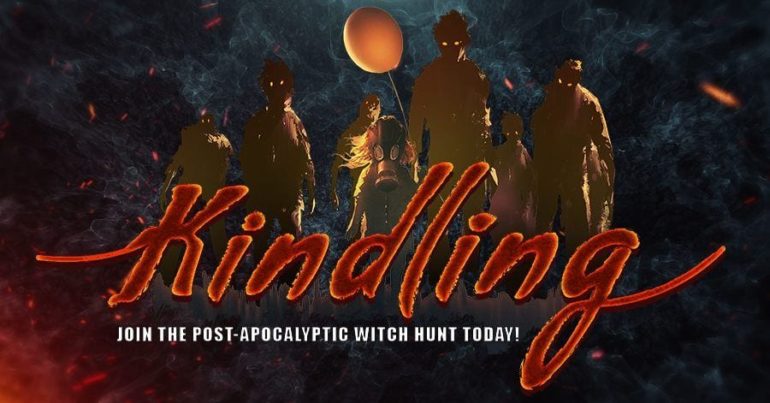 You Can Be The Hero Of A Post Apocalyptic Witch Hunt

Have you ever wanted to be the hero of a post-apocalyptic tale?

Well here is a chance to do just that, without the threat of impending doom. Kindling is an immersive theatrical experience, aka a role-playing event. If you don’t have any role-playing game experience, that’s okay. In fact, everything you need will be provided so it’s a great way to try out something new.

About the world of Kindling

“After the world has ended in flame and destruction, pockets of the population have been surviving in places such as the subway tunnels, basement vaults of museums, fallout shelters, and other underground areas. When a transformed threat emerges in a community, the populace turns to an old practice used by their ancestors for singling out the strange and the abnormal – Malleus Maleficarum.

The community is threatened by the presence of a witch or witches. Some of these can be identified by a physical mark or strange power, but it seems that in this world, things are changing for everyone.”

So what, exactly, will you be doing?

You’ll participate as a resident of Davis Square, a Boston subway station turned settlement and community after the disastrous yet long overdue eruption of the Yellowstone super-volcano. If you want to get super into the game, you can always prepare a little light costuming before the event, but it’s certainly not required.

The afternoon will start with a workshop, preparing you so you can fully appreciate the experience you’re about to have. Then you’ll jump right into Kindling, alongside your fellow delegates. After that, there will be a debrief.

Your character sheet, which explains who you’ll be portraying, will be provided at the beginning of the game and will be based on the feedback you give when you enter. The point of role-playing is to make decisions based on your character, so you’ll need to take on their motivations, background, and behavior.

There won’t be a script to follow, so the decisions you make as your character will have a real impact on the outcome of the experience.

The event will take place on September 16 from 2 p.m. to 6 p.m. at Barley’s Underground, 467 North High Street, Columbus, OH 43215 (Upon entering Barley’s, please proceed on the left and down the steps to the Underground). There are 35 characters at the event, and you’ll need to arrive about 10 minutes before to fill out your preference survey. Tickets are $35 and you must be 21+.

To get your ticket, or for more information, please click here.