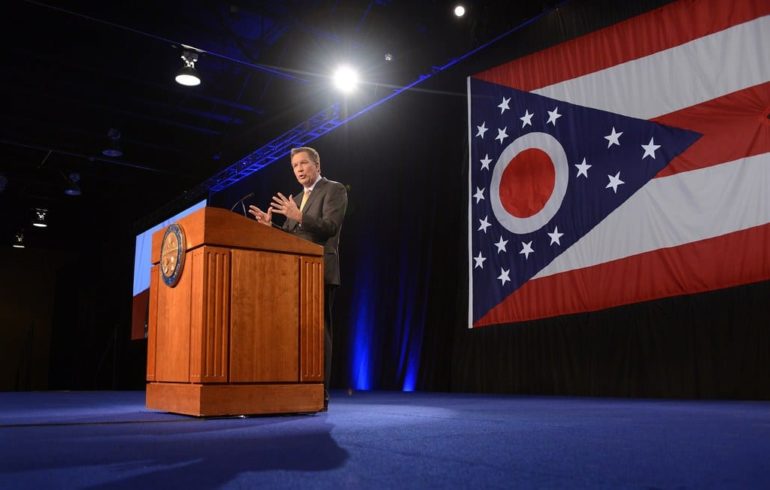 Some Are Speculating A John Kasich Bipartisan Presidential Bid For 2020

Two governors from opposite sides of the aisle may just make a presidential run in 2020.

Rumors have always rumbled over whether Governor John Kasich would have it in him to run for the United States Presidency again. With all his recent posturing as a moderate voice of reason, it certainly seems like it. But now recent rumors have taken a bizarre and interesting turn. According to sources backed by CNN, Kasich isn’t just entertaining the idea of running for office in 2020, but he’s also considering a unity ticket, utilizing a Democrat as a running mate.

According to reports, the governor is looking to tap Democratic Colorado Governor John Hickenlooper for the role of Vice President in the 2020 election. Neither governor has actually confirmed the talks although both are currently collaborating on policy issues and seem to enjoy a pleasant working dynamic.

John Kasich is running for President in 2020. He only asks that we be very quiet as he’s going into Extreme Jedi Training Mode for this one. pic.twitter.com/iRyPLfuKwD

Though theoretically possible, the likelihood of a unity ticket pulling an election seems pretty slim. Kasich and Hickenlooper would be forced to run as Independents, without the support of either of their primary parties. This strips them of valuable partisan assets as well as campaign contributions.

A bipartisan unity campaign may be a noble and ambitious idea, but it’s not exactly a practical one. Though perhaps, in a political climate as divided and volatile as it is now, it might actually be what the country needs.