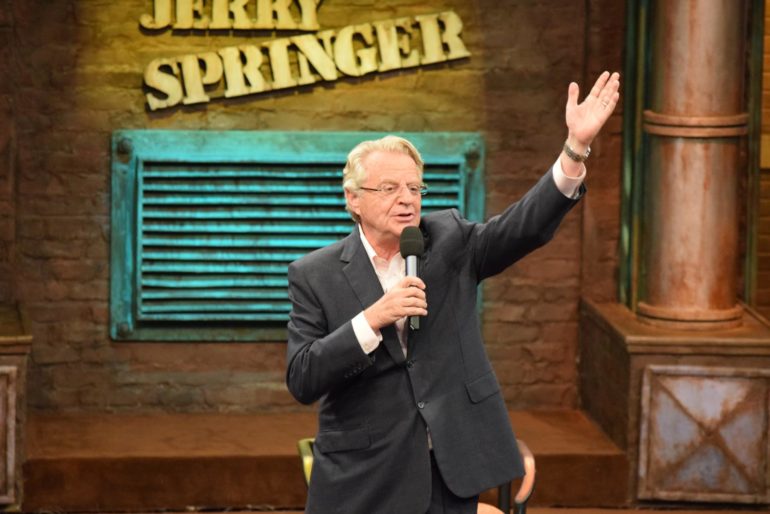 After Threatening A Run For Years, Is Jerry Springer Going To Finally Try For Governor?

Jerry Springer, the sensationalist ringmaster himself, has been heavily weighing the possibilities of a Democratic run for Ohio Governor. The day time talk show host has surveyed a number of focus groups and has even been seen appearing at Democratic speeches and fundraisers. Though the celebrated “King of Trash TV” has been openly flirting with the idea, he’s remaining relatively tight lipped on whether he’ll make a serious go at it.

It might seem like a ludicrous concept now, but an earnest run for governor is not outside of Springer’s norm. He has a varied background in Ohio politics, from his time on Cincinnati city council in the 70s to his one year stint as the city’s mayor (due in part to an odd set of political arrangements and election policies at the time). He even made a bid for the Democratic Governor’s nomination once before in 1982 but lost miserably to two other established Democrats.

Part of his problem in the past was due to a looming prostitution scandal, one that he fessed up to in 1974, but a combination of time and stark honesty has practically swept the controversy under the rug. Springer is actually looking at a more than fair shot this time around, with his name recognition and charisma far outshining those of the current Democratic candidates.

Some may point out that his history as a daytime TV shock jock could put a hurting on his chances.

This doesn’t seem to be the case, as it’s already been proven that the American voter doesn’t care as much as one might think when it comes to electing contentious trash TV stars. Springer would have more than enough revenue to bankroll his campaign, combined with his popularity and history of populist policies, he’s got the exact recipe for a hot button election, popular in today’s political system. This says more about our present electoral body than it does for our candidates but how to interpret that is the real question.

Hillary Clinton belongs in the White House. Donald Trump belongs on my show.