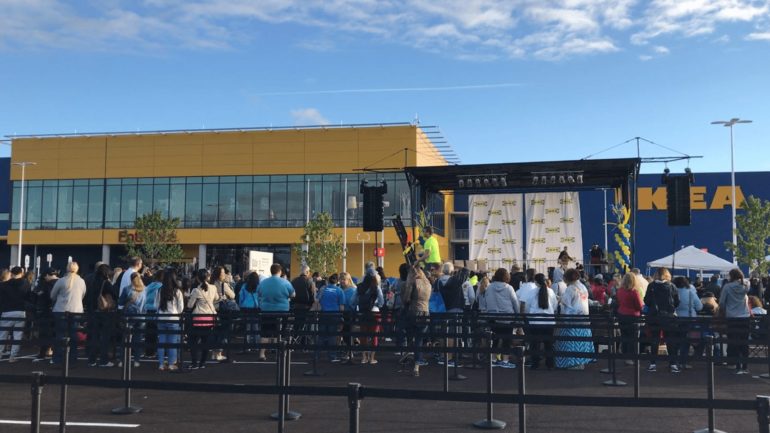 IKEA Columbus was greeted by hundreds of excited customers, with thousands more promising to visit throughout the day.

The store manager brought good luck to the new store and its guests by performing a traditional Swedish log-sawing ceremony. Think of a ribbon cutting ceremony, but with a giant log of wood.

“We are excited to bring the unique IKEA family-friendly shopping experience and affordable home furnishings of good design to Columbus and Central Ohio,” said Garcia. “The enthusiasm of coworkers about this big day and the warm reception from the community are translating into excitement and a great shopping event for our customers.”

IKEA commemorated the grand opening of the store with a donation of $10,000 worth of home furnishings to the Homeless Families Foundation.

People lined up days in advance with hopes of hopes of scoring giveaways like a free EKTORP three-seat sofa or a POÄNG armchair. If you missed out on the couch, you still have the chance to win some other great freebies. For instance, the first 44 adults in line tomorrow will win a free queen-sized HAUGESUND mattress.

IKEA invited enthusiastic customers to begin lining up at 9 a.m. on Monday, June 5. The first people in line were friends Kenneth Heyward and Felicia Andes and to get into the store at 8:59 a.m.

The people camped out outside the store were kept busy by IKEA staff. They participated in games like chair building contests and relay races. The store even treated the people waiting in line with pizza, cinnamon buns, and other refreshments.

And now for some delicious fresh baked cinnamon buns and coffee compliments of #IKEA food 💝 pic.twitter.com/HZ7eLilh64

IKEA Columbus features roughly 10,000 exclusively designed items. The store was first announced in early 2015. A year and a half later, the home furnishings retailer plans to welcome anywhere from 10,000 to 15,000 customers each day during its opening week.

IKEA Columbus is the 44th U.S. location and the 397th store worldwide. It’s a 354,000 square-foot store with 1,100 parking spaces. The location takes up 33 acres. Over 3,000 solar panels line the roof of the store. It’s part of IKEA’s sustainability efforts.

If you’re excited to check out the store, but don’t feel like fighting tooth-and-nail through the traffic and crowds, here are a couple of pictures to tide you over until the chaos die down.