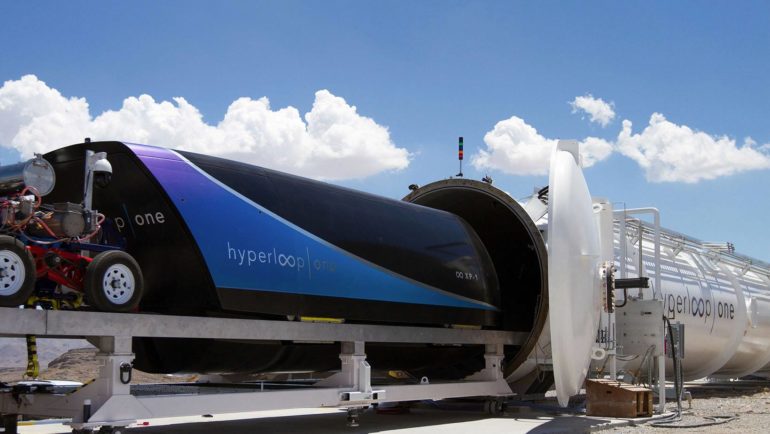 A Midwestern Hyperloop Would Be Amazing, But Can We Believe The Hype?

A new Hyperloop system connecting Chicago, Cleveland and Pittsburgh would require an enormous investment, but would also have an equally large economic impact on the entire Midwest.

That’s the main theme of a Hyperloop feasibility study released earlier this month. The $1.3 million study was conducted and financed jointly by Hyperloop Transportation Technologies and the Northeast Ohio Areawide Coordinating Agency (NOACA), a metro planning organization covering the Cleveland area. Ohio taxpayers contributed to much of NOACA’s share of the study cost.

Hyperloop, as described in the study, is a tube-based transportation system which involves capsules traveling at high speeds. The vision is to connect major American cities with Hyperloop tubes. Magnetic technology and an electric motor propel the capsules in a “low-pressure environment.” On a flat, straight terrain, it is estimated riders could travel at speeds of 500-600 miles per hour.

To date, Hyperloop tests (without human riders) have topped out at 288 miles per hour. A trip from Cleveland to Pittsburgh would take only 30 minutes, with the Cleveland to Chicago leg being just 40 minutes.


There are “intermediate stations” proposed in between those major stops: in South Bend, Ind.,Toledo and Youngstown.

This Chicago-Cleveland-Pittsburgh corridor was selected for closer review because of the region’s central location. The need for an alternate transit option from cars is demonstrated, the study claims, by recent increases in Amtrak ridership between Chicago and Detroit.

Beyond the current need, researchers think the project could allow for future Hyperloop expansion. The tube line could extend past Chicago to the west; past Cleveland toward New York City and Boston; and past Pittsburgh toward Philadelphia, Baltimore and Washington, D.C.

“Since a Cleveland to Chicago link is essential for making so many connections, this would be an excellent place to begin developing a national Hyperloop network,” the study reads.

As might be expected of a study underwritten by a Hyperloop development company, the feasibility study paints a rosy picture of both the need for Hyperloop and the positive effects it would have on the region if built.

It is suggested that an increase in population, jobs and household incomes within the Midwest will lead to greater public transit demand. More people means more traffic congestion, which combined with rising fuel prices “will create a diversion from auto,” the study notes.

There are a number of factors at play in considering the actual path of the Hyperloop tube line through these states.

For example, a completely straight path is preferred to reduce turning and resistance (thus keeping speeds elevated). It is also preferred that following existing right-of-ways with current rail and highway segments so as to “minimize the need for property access.”

The study acknowledges complications with both of these priorities. Drawing the straightest path would require costly underwater sections across Lake Erie. Also, exactly following the Ohio and Indiana turnpikes is not viable because they are viewed as being “too curvy” for a Hyperloop track.

The intermediate stops in South Bend, Toledo and Youngstown generally lie along the Chicago-Cleveland-Pittsburgh path, though not precisely so.

In sum, researchers found it difficult to design a perfect route that meets every one of these factors. Instead, they developed a number of options which cater to some of those attributes and less to others. Each comes with varying travel times and construction costs of between $48-75 million per mile of tube built.

The total capital costs are difficult to predict, as the amount needed for land purchasing or leasing is a major question mark. The study pegs the entire project cost as being between $25-30 billion.

‘We are getting ahead of ourselves’

The trouble is not so much about the Hyperloop itself, critics say. Rather, it’s a matter of evaluating the current need for improved transit access and determining the most realistic solution to that problem.

For those at All Aboard Ohio, a transportation advocacy group based in Cleveland, the Hyperloop technology is still too distant to serve as an adequate fix for today’s demands.

The organization recently called on Ohio policymakers to “look critically” at the Hyperloop study and instead consider other transportation options.

“While we welcome consideration of new technologies, they must be vetted for their practicality. We are getting ahead (of) ourselves here,” said Ken Prendergast, the group’s outgoing executive director.

Stu Nicholson, set to become executive director on Jan. 1, 2020, described the attention being given to Hyperloop as being a fixation.

“We have transportation needs today that aren’t being met with our highway/aviation-only system,” Nicholson said, “and won’t be met for many years, if ever, by fixating on Hyperloop.”


Kevin Verhoff, an Ohio transportation hobbyist whose proposal for a state rail system was previously featured by the Capital Journal, is also skeptical of the public investment in Hyperloop.

“I don’t understand why governments are throwing money at hyperloops when there is so much private interest/investment,” Verhoff wrote on Twitter. “Let private companies figure it out, & if they do, great! In the meantime, let’s use govt dollars to make folks’ lives better now.”

As reported, NOACA used taxpayer funding via the Ohio Department of Transportation and the Ohio Turnpike and Infrastructure Commission.

Angie Schmitt, a transportation writer, additionally pointed out that while Hyperloop would make inter-city travel more available, it does little to benefit average Americans with their daily lives.

‘If the “future of transportation” is wealthy people can ride a vacuum tube from Cleveland to Chicago or wherever in a half hour but still 80% of Americans can’t safely walk/wheel ~1/2 mile to the store, that will be so depressing,” Schmitt tweeted.

The study highlights a number of predicted benefits to a Hyperloop system. It could reduce congestion on highways and at airports, along with lowering car emissions and improving public transportation safety.

Cheaper, faster inter-city travel could lead to more tourism spending and allow for job opportunities that are currently unthinkable — imagine living in a Cleveland suburb but traveling to Chicago each day for work.

For now, though, the idea of a Hyperloop line between Chicago-Cleveland-Pittsburgh is only theoretical. It will take far more planning for the first capsule to be sent rifling down the tube.

This story was originally published by Ohio Capital Journal on December 30, 2019 with the headline, “Hyperloop-backed study predicts major benefits to Midwest, but skeptics have their doubts”
We highly recommend subscribing to their newsletter, which you can do right here.