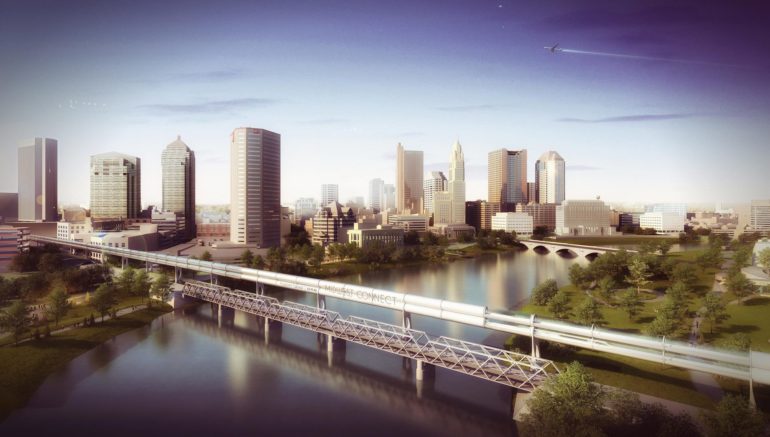 The Midwest Connect Hyperloop Is One Step Closer To Reality

The plan to connect Chicago, Columbus, and Pittsburgh by Hyperloop just took another step in the right direction.

Find out more about our $2.5 Million Rapid-Speed Transportation Initiative, which moves us further along in transportation technology options – including traditional passenger rail and @HyperloopOne technology — between Chicago, Columbus, and Pittsburgh. https://t.co/4OCIhMnyPH pic.twitter.com/vqSV4wrSg7

The Mid-Ohio Regional Planning Commission (MORPC) is launching a Rapid-Speed Transportation Initiative that will explore intercity routes that could potentially utilize rapid-speed transportation, including Hyperloop and traditional passenger rails.

The two studies will look at the feasibility of Hyperloop technology for the route, as well as an environmental study. The total cost of the initiative will be $2.5 million.

The City of Columbus will commit $250,000, with an additional $500,000 from Ohio and Indiana rail partners, Union County, and the cities of Marysville and Lima. There will also be likely contributions from private partners and Virgin Hyperloop One, but the amount has yet to be determined.

“As the winner of the U.S. Government’s Smart City Challenge, Columbus and Central Ohio is on the cutting edge of transportation technology,” said Virgin Hyperloop One CEO Rob Lloyd. “We are very excited about the prospect of a Midwest Hyperloop from Pittsburgh all the way to Chicago. These actions by MORPC break new ground because they are integrating Hyperloop technology into a larger Environmental Impact Study — the first time that has happened anywhere in the world.”

The route, officially called Midwest Connect, was one of 10 global winners of the Hyperloop One challenge. The reason this route succeeded when so many others were eliminated was due to the advanced rout analysis provided by MORPC, as well as the fact that the route connects four states.

“This is another step forward for our community, as we work together to become the model for connected cities of the future,” states Alex Fischer, The Columbus Partnership President and CEO. “We’re pursuing the most comprehensive study for any corridor – and the only interstate corridor at that – and we’re doing it the Columbus Way, bringing together the private, public and non-profit sectors to transform our community and its prosperity.”

Chicago to Columbus in less than an hour is a step closer to reality. https://t.co/tNYrzmfT47 pic.twitter.com/OC0eWCmb6s

The first of the two studies, the Feasibility Study, is estimated to take nine months. The study will include two potential routes for evaluation. One option was already featured in the Midwest Connect corridor proposal. The second would be an alternative route, determined as the study advances. But both potential routes will include Chicago, Fort Wayne, Lima, Marysville, Columbus, and Pittsburgh.