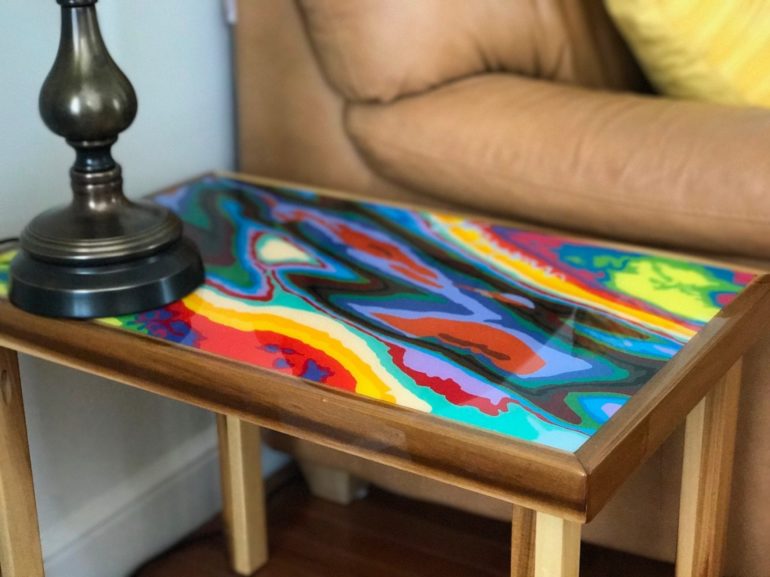 These Bedrock Map Tables From Huxley Studio Are Outrageously Beautiful

Who knew that a geologic map was such a work of art? Not me.

Kelli Hughes and Drew Romig are two attorneys that have turned their creative escapes into a part-time business.

Kelli has always loved painting and Drew has been building furniture since he was around 12-years-old. When Kelli needed a new desk for her office, she and Drew decided to make one. Kelli had always admired a Bedrock Geology Map of Ohio that hung over Drew’s desk—as an attorney, he works with oil and gas companies—and wanted to somehow translate that into her own workspace. The self-proclaimed geology nerd painted a section of the bedrock map on her desk and sealed it with art resin.

She posted a picture of their collaborative creation on social media and received an overwhelmingly positive response. After some consideration, the couple decided to start their own business, Huxley Studio. You can find the Bedrock Geology furniture and their other wares at Hayley Gallery and on Etsy.

Kelli and Drew just moved out to a big old farmhouse in Hillard and now they have more room than ever to make their creations. I met with Kelli and she gave me a tour of the place full that’s full of their beautiul creations.

Me: Do you have a favorite piece that you’ve ever made?

Kelli: Both of the Ohio maps. That’s the first one I did. I was like, “Oh, I need a long awkward desk for my office.” So it’s a section from Columbus to Dayton, Ohio. I’ve used it for three years now and this stuff—this art resin stuff—kudos to those people that made that. Because it’s nontoxic, it’s non-yellowing, it’s food safe. You can treat it like glass, but it doesn’t break. It’s the best thing.

Me: What kind of wood do you use to make the tables?

Kelli: It’s all tulip poplar. So it’s super sustainable, I mean, it grows really fast. A lot of people don’t like the wood with the darker grain because it’s the diseased wood. But I think it’s just gorgeous.

Me: How many tables do you make in a year?

Kelli: Last year, we made like 15. Drew just kind of works on that in his spare time, same with my painting. Since we both work, we can’t do it all the time, unfortunately, but that was definitely the most prolific year last year.

We did the Art Festival last year and that was super awesome. We sold some stuff, we had nesting tables, and we had another table and we sold those. It was just really fun. It was a great experience. The people at the Greater Columbus Arts Council were so awesome with everything.

Me: What’s the farthest you’ve had to send one of your tables?

Kelli: Northern Michigan. We have a cabin up there so we just drove it up there. We say, “If you live within—because I love driving and roadtrips—500 miles of here—we’ll take it to you for free. 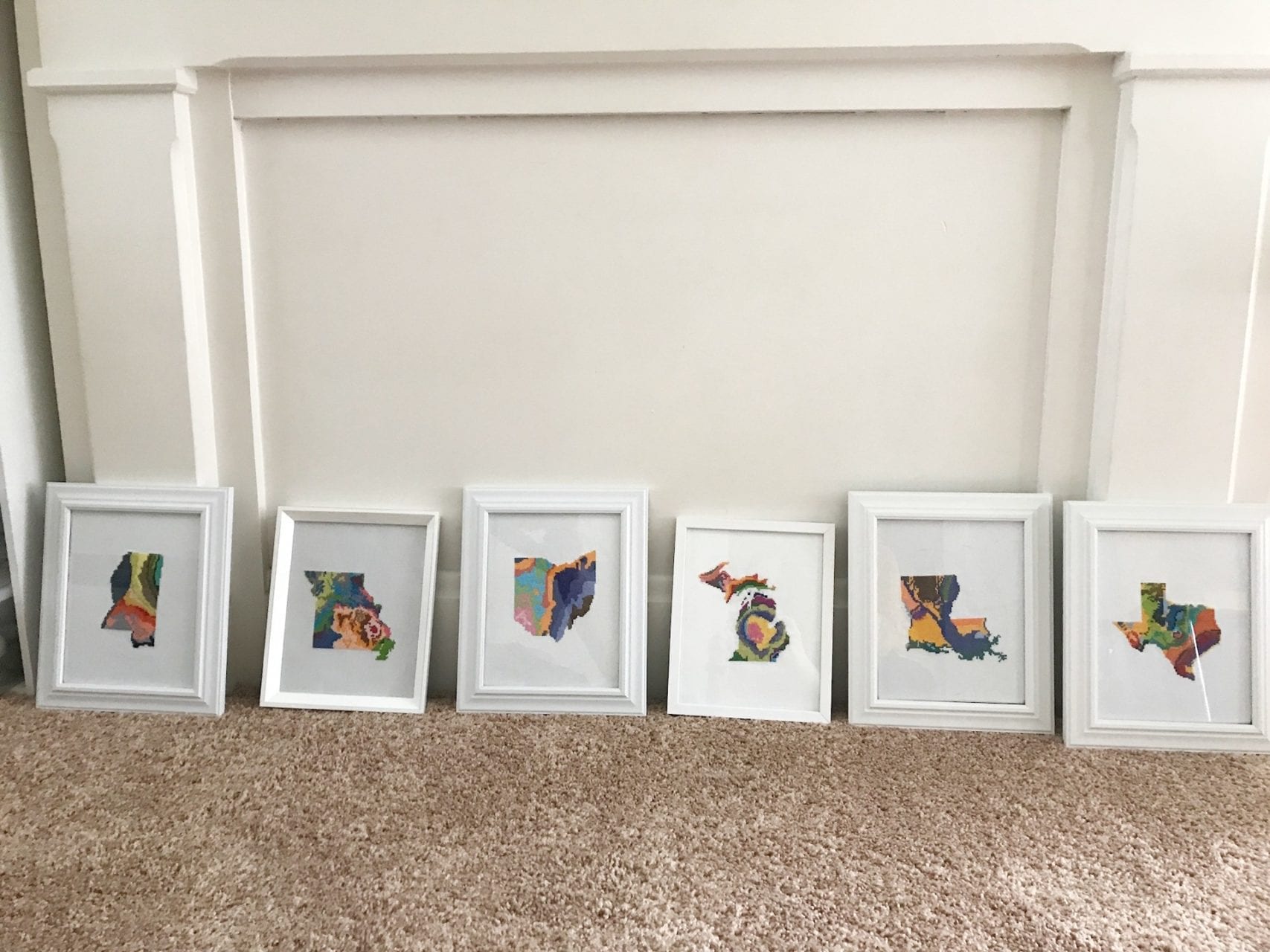 Me: What else does Huxley Studio make?

Kelli: On Etsy, I sell cross-stitch kits of the geology maps of the different states. And I’ve got about 18 states. I sell a lot of those. Like I said, I’m kind of obsessed with the maps.

Me: Are your paintings of anywhere in particular?

Kelli: All of the things that I generally paint, besides the things I’m working on now, are all of Leelanau County, Michigan. It’s the most beautiful place ever.

Me: How big did you see this getting?

Kelli: We’re so busy with work, just as big as we have spare time to do anything. It would amazing to be able to do this full-time. Maybe down the line somewhere? Obviously, I’m going to keep painting and he’s going to keep making stuff, so I mean I guess until we run out of space to either have the stuff we don’t sell and sell stuff.

It totally just a random choice and we just went with it and worked out. It’s been super fun and continues to be fun. I think people concentrate way too much on “real-life jobs.” And I’m not saying you shouldn’t, but you can’t forget the things that always made you happy.

Me: What is your favorite part of the process?

Kelli: I like painting them. It’s super relaxing. It’s just fun to work with somebody and have the process go so well. Drew and I had never done anything like that, ever. And it as just pretty cool to put it all together and actually have it come to fruition. Seeing the finished product is really amazing.

That’s the other amazing thing about all of these tables. They made me start painting again.

Want the table in the featured image? It’s the bedrock map of Altoona, Pennsylvania east to Huntingdale. Find it here.