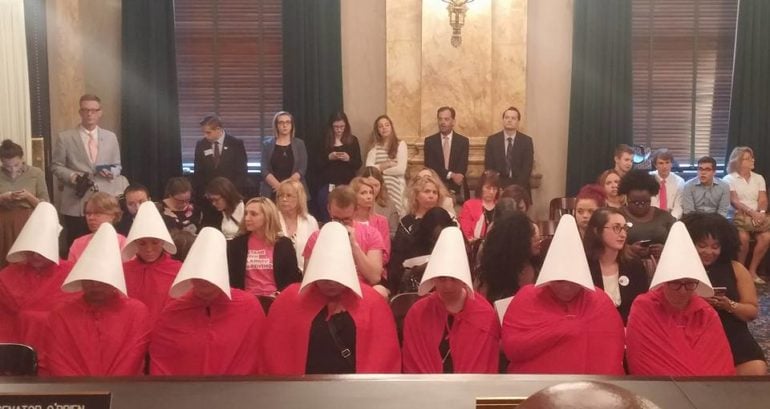 In the style of The Handmaid’s Tale, protesters made their way to the Ohio State House to protest a bill that they believe violates women’s healthcare rights.

Bill sponsor is talking about how women cannot be trusted to make their own healthcare decisions surrounded by #OHHandmaids pic.twitter.com/7ZyrCe2ES6

The Handsmaid’s Tale is a dystopian novel by author Margaret Atwood. Released in 1985, the novel won several awards, including the first Arthur C. Clarke Award in 1987. Recently, the Hulu series by the same name has brought the story of Offred the handmaid back into the minds of the public.

Gilead, the fictional region in which the story takes place, is not a friendly government for women. Handmaids, in particular, bear the brunt of injustice as they are required to bear children for wealthy couples against their will.

Many protesters have worn the handmaid costume to protest for women’s healthcare in the last few months. In Ohio, the women were protesting Senate Bill 145, a bill that proposes to ban the most common method for second-trimester abortions.

Just another day at the Statehouse. pic.twitter.com/R6H0RVuQaT

The method in question, dilation and evacuation, which is more commonly known as “D&E,” is a safe method for second-trimester abortions.

According to a report released in February 2017 by the Guttmacher Institute,

“Restricting this method is part of a larger campaign to limit access to abortion and would force providers to substitute the ideology of lawmakers for their own professional medical judgment and the preferences of their patients.”

If SB 145 becomes law, it will “criminalize and create civil action for dismemberment abortion”.

To view SB 145 in its entirety, please click here.