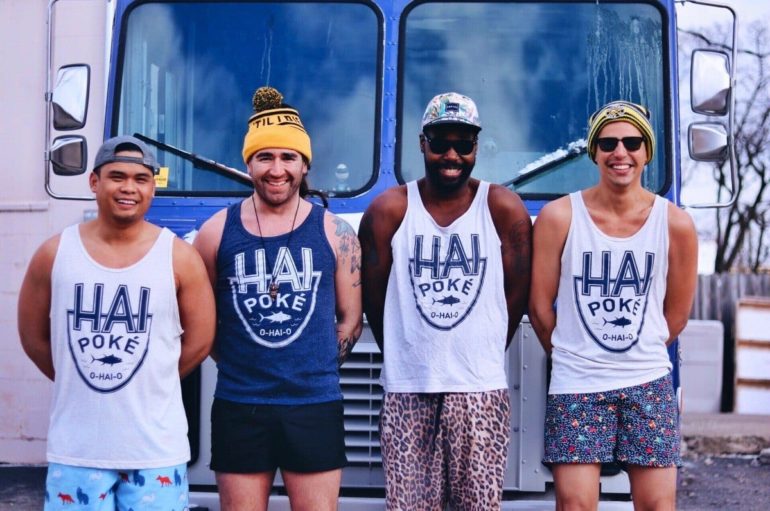 On March 1, Hai Poké announced that they would be opening their very own brick and mortar. Their space at 647 N. High St. in the Short North is expected to open in August.

We're so grateful for all of your love haiFAM! Come stop by and celebrate the big news with us all this week ❤🐟 pic.twitter.com/5WtaurhLBv

The island-inspired street food debuted in Columbus just under two years ago. The very first pop-up kitchen happened on August 13, 2015. With a $1000 loan from co-founder Nile Woodson’s mother and a we-can’t-fail attitude, Hai Poké was a huge hit. The event was scheduled to last two days, but they expanded it to a total of five days because of the success.

“It’s been a fun and interesting road,” said Woodson. “We’ve never done this before.”

Woodson and fellow co-founder Mico Cordero are beyond pumped for their location to open its doors.

“We’re moving things forward and we have a pretty straightforward timeline,” said Cordero.

Last summer, Woodson and Cordero had plans to get Hai Poké into the North Market, but it didn’t work out. You know the old saying, “When one door closes, another one opens”? Well, in this case, it was totally true. The founders of Hai Poké caught wind of a Short North storefront’s availability and sprung into action.

A lot goes into opening a restaurant—leasing, permits, design, construction—and they learned this very quickly. They took each step of the process in stride and now they’re roughly a month away from the big day.

With the red tape out of the way, Hai Poké hopes to open the doors to their new location in mid to late August.

As for the kitchen takeover and Hai Poké food truck, don’t worry. They’re not going anywhere. In fact, their kitchen takeovers are proving to be the perfect way to train their staff and prepare them for when they have their very own kitchen to work in. But this new location is definitely Hai Poké’s crown jewel.

“I don’t want to say anything is less important. It’s like I have three kids, I don’t have a favorite, but our restaurant will be our most important space,” said Woodson.

In the past, the location has been a bar, condos, the conference room of First Common Wealth Bank before they consolidated their office, a bakery, and most recently a vintage shop. It sat empty for a while before Hai Poké signed the lease, and now they’re transforming the 500-square-foot space into their own.

“It’s going to be the smallest–biggest space we’ve ever operated in,” Cordero joked.

But turning an old vintage shop into an island-inspired street food restaurant requires a plan and a team. Hai Poké has both.

“We’ve been really lucky to be able to work with really great local companies,” said Cordero.

Adrienne Consales, with Black Ink Design, and Compton Construction have been helping with Hai Poké’s project. Nile and Mico said they thought about helping Compton with the demolition phase of the project, but that they’d probably do more harm than good.

Both Woodson and Cordero admitted to me that they cannot sit still for long; they’re constantly looking ahead and coming with a new business scheme.

“A little bit before we’re actually kind of comfortable, we’ll already be looking for the next location,” said Woodson. Meaning, that they won’t start to slack off now they have an establishment. Why not continue to grow?

The founders at Hai Poké are excited about a number of things when it comes to their brick and mortar. They’re thrilled to see their hard work paying off and watching their company grow before their very eyes. A new restaurant means new team members, which they’re looking forward to welcoming to their family.

What Hai Poké is most excited for is having their own space.

“It’s like you’re traveling and you’re staying at your sister’s house, or you’re brother’s house. Like, you’re with family, and you’re obviously very comfortable with family. But you’re still at their house,” said Woodson. “So even though you can do more than you could anywhere else, you still don’t have that full layer of comfort.”

“It feels like we’ve been guests in other people’s homes—family’s homes— but this is our home. It feels like coming home after a long trip,” the co-founder continued.

If you can’t wait until their restaurant opens to get your hands on some Hai Poké, you can find them at these locations: