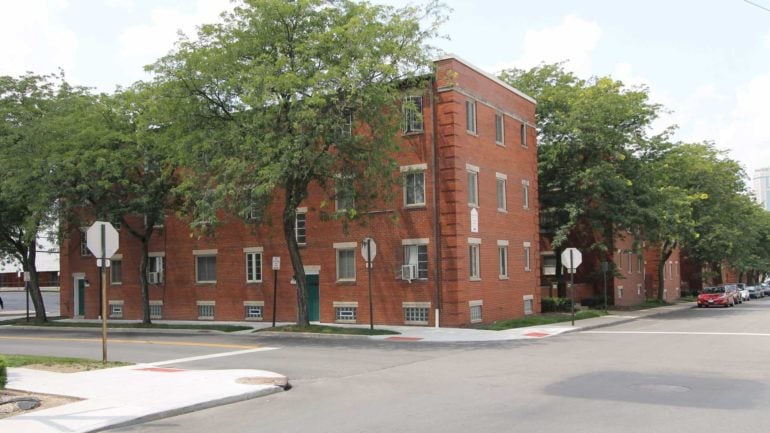 Grant Oak Apartments Are Being Torn Down And Redeveloped

Grant Oak Apartments in the Discovery District will soon be demolished and redeveloped into two, 5-story apartment buildings.

The apartments were owned by the Columbus Metropolitan Library, who announced back in 2016 that they were going to sell the property.

Fast forward two years and the deal is now official. The new buildings will be developed by the Pizutti Company. The new design will include ground-floor retail space and multi-family apartments.

“We’re extremely pleased to continue our work with Columbus Metropolitan Library,” Pizzuti Cos. President Joel Pizzuti said in a statement. “This is a key site in the Discovery District and will further cement the area as one of our city’s vibrant, walkable neighborhoods.”

The two new buildings will house 120 apartments, from studio size to two bedrooms, and will be separated by green space and a new road from Oak St. to the Main Library’s underground parking garage.

Of course, not everyone is excited about this recent development. For students attending Columbus College of Art & Design and Columbus State Community College, the Grant Oak apartments were notoriously affordable, unlike many other properties around the city and near the schools.

Affordable housing is a problem all over the state, and the country as well. As more luxury housing is built in the downtown area, wages are not increasing at a rate that makes it possible for renters to keep up.

Ohio’s Housing Wage is $15.00 an hour. That means that renters need to earn at least that amount in order to afford rent in a basic, two-bedroom apartment.

In Columbus, that wage is slightly higher, at $17.04. It is the highest in the state. A report released by the National Low Income Housing Coalition and the Coalition on Homelessness and Housing in Ohio released in 2017 shows just how dire the situation is.

“The Out of Reach 2017 data shows why millions of low-income renters are struggling to afford their homes,” said Diane Yentel, president and CEO of the National Low Income Housing Coalition.

“We have the resources to solve the affordable housing crisis by realigning federal tax expenditures and reinvesting the savings in rental housing programs that serve our nation’s most vulnerable. We lack only the political will to do so.”

Detailed plans for the new buildings have yet to be released but it will require approval from the Downtown Commission before the project can begin. Construction is expected to start in late 2018.

Isn’t that great Columbus? We don’t have to worry about students and professionals that can’t afford luxury apartments. They’ll just be over in their cardboard boxes like…