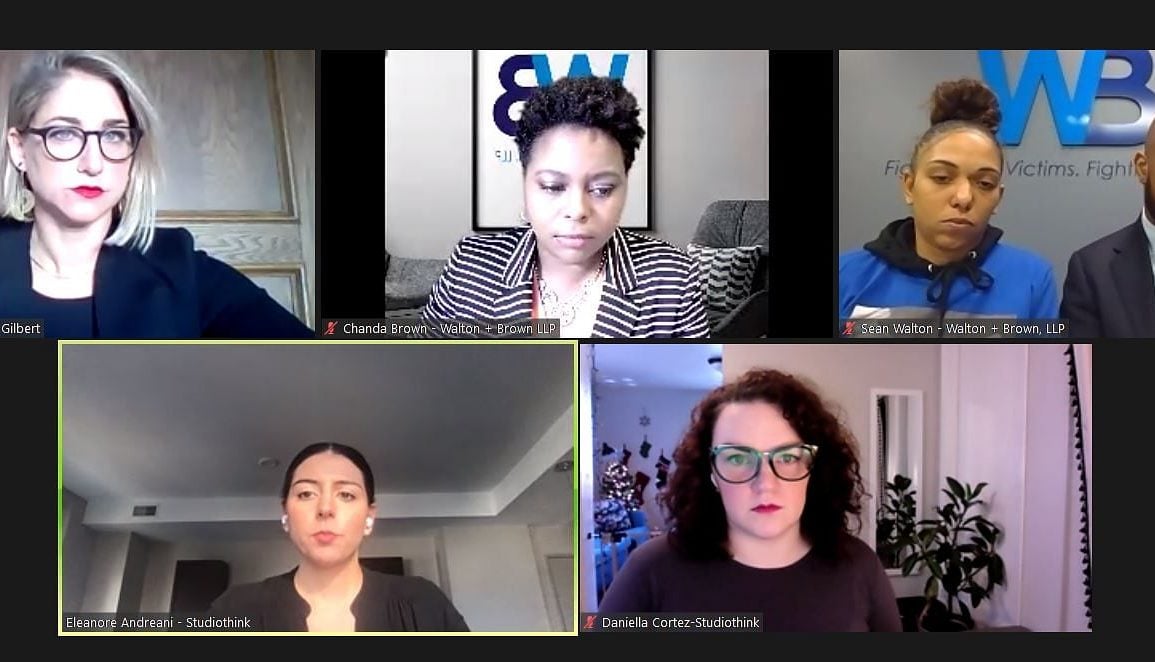 Tamala Payne (second from the right), mother of Casey Goodson Jr., spoke out about the killing of her son by Franklin County SWAT deputy Jason Meade on December 10, 2020.

By Jaelynn Grisso and Marissa Twigg

Note: This story contains language and descriptions that may be upsetting to some.

On December 6, Columbus Division of Police tried to pass Goodson’s investigation to the Ohio Bureau of Criminal Investigations, but the bureau declined to take the case because three days had already passed since the shooting. That means the investigation will stay in CPD’s hands.

An additional investigation was opened by the FBI on December 8 that will center on whether or not the shooting violated Goodson’s civil rights.

“We are pleased and hopeful that the federal government has stepped in. We have confidence that they will treat this investigation with the seriousness it deserves,” Sarah Gelsomino, one of the family’s lawyers, said during a press conference on December 10. “However, we remain extremely concerned that, because of the way this investigation was mishandled from the moment of the shooting, that the entire investigation is forever tainted.”

Goodson, a 23-year-old Black man, was shot and killed by Meade on Friday, December 4 in front of his home. Meade, a 17-year veteran of the Franklin County Sheriff’s office, was permanently assigned to work with the U.S. Marshals as a SWAT deputy. On the day Meade shot and killed Goodson, he was in an unmarked vehicle working unsuccessfully on another case involving a fugitive. The Sheriff’s office confirmed that Goodson was not the target of Meade’s search.

For the family’s legal team, mishandling the investigation started with the officers’ behavior at the scene of the shooting.

When Tamala Payne, Goodson’s mother, was asked to share her story during the conference, she immediately broke into tears. After a few moments to collect herself, she said she came to the house after receiving a call from her 5-year-old son.

She said when she arrived, the police had taped off the area where Goodson was and had her other family members in her niece’s car.

She added that they wouldn’t give the family any information as to what hospital he went to or whether he was alive when he was put on the stretcher. She also noted that there was one officer she described as a “kind man,” who would give them updates and who ultimately told them Goodson had died.

“We didn’t know if he was dead or alive,” she said. “When we found out that Casey didn’t make it, of course we were all destroyed. We just wanted each other, and they wouldn’t let us,” she said.

Her family was not allowed to get keys to get into a car for warmth. Instead, they were outside with no shoes and no coat, she said.

Payne also said that officers called her a “bitch” because she was trying to get to her family.

“Not once, but several times, I was called a bitch,” she said.

Shortly after the press conference, the Franklin County Sheriff’s Office released a statement from Sheriff Dallas Baldwin regarding the use of that language.

“I listened carefully and with compassion when Ms. Payne described deputies at the scene using the word ‘bitch,’” Baldwin said, according to the statement. “I am aware there was a large, multi-agency response to the scene, but if one of my deputies used such language at the scene of any tragedy, it would be unacceptable and unbecoming of a law enforcement officer. I am directing my internal affairs professionals to do an immediate internal review to determine if such language was used and who may have used it. This will include interviewing these family members if their lawyer permits it. No grieving family deserves to be insulted.”

Statement from Sheriff Baldwin re: Use of derogatory language towards family. pic.twitter.com/LzmkWJHNZU

Other family members report being threatened by police

The family’s lawyers reiterated throughout the conference that Casey’s family members were treated as suspects, rather than victims, by officers on the scene.

“The people who have been criminalized in this case are the family,” Gelsomino, one of the family’s lawyers, said during the conference. “That’s how they were treated at the scene and when the officers left. They were criminalized and victimized.”

Sean Walton, the primary lawyer for the family, brought up one example involving Casey’s Uncle Ernest. Walton said that Casey’s uncle told him SWAT deputy Jason Meade, after shooting Casey, pointed his weapon at him and threatened to shoot.

“Meade pointed his gun at Casey’s Uncle Ernest, and threatened to shoot him if he did not get out of the house while he was holding his 3-year-old daughter,” Walton said.

In a 911 call obtained by Matter News, a woman who identifies herself as Goodson’s cousin said she heard shots and was not allowed near Goodson. She said she was unclear who had fired shots or what was happening, despite the dispatcher saying an ambulance was already there.

“There’s two people who look like police. I don’t even know if they are police,” she said. She added that there were children present when he was shot, including her own.

Many questions around the investigation remain

With the question of who will be investigating answered, many other questions surrounding the investigation and the shooting itself remain.

Gelsomino also noted that Meade, the officer who shot Goodson, has not given any statements regarding the shooting. Meade is currently not on duty and will not be for the foreseeable future, Marc Gofstein, the public information officer for the Sheriff’s department, said in a phone call with Matter.

But, he added, there is no definitive timetable. When asked if that meant Meade could be put back on duty before the investigation is completed, Gofstein said he couldn’t answer that at this time.

“If Meade is back on the streets acting as a police officer before the end of this investigation, what we have is an officer being investigated for not only civil rights violations, but also murder, and he would be out policing our communities. It is unsafe,” Gelsomino said.

For Payne and her family, she said the events of that day will forever change them.

“We will never be the same,” she said.