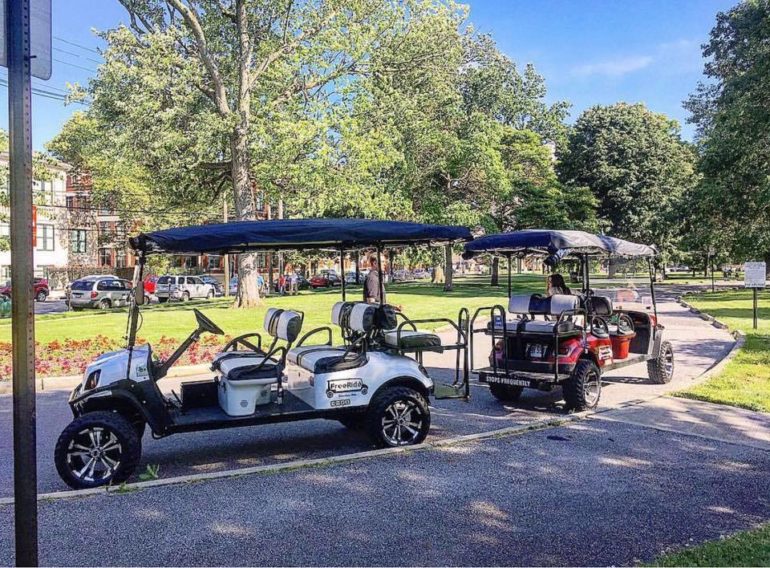 There’s a new way to get around town in Columbus and the best part: it’s free.

FreeRide is a brand new micro-transportation company that you can find zooming around Downtown Columbus and the Short North. When I say zooming, I don’t mean anything like The Fast and the Furious. This free-of-charge taxi service uses golf carts to get people from here to there in Columbus’ most trendy areas.

I came across FreeRide when I was out with friends. We’d just walked outside of a stop while hanging out in the Short North when we heard a voice call out, “Hey, you guys want a free ride?”

We looked over and saw Shantay “Tay” Hester, the driver for FreeRide pictured above, smiling at us friendlily.

We were hesitant at first. I mean, one of the first rules your mom drills into your head is, “Don’t get into cars with strangers!” Despite the instinct to decline, we decided to hop in.

You can hail a FreeRide like you would a taxi and hop on in. They can take anywhere from one to five passengers in their golf carts. When they say free, they mean it. You’re not required to pay anything. But tip your driver, don’t be rude.

Thanks to Hester and her FreeRide cart, we were saved from walking what would have been a 25-minute trek to our next stop of the night. It was as simple as that. We tipped Tay, said thanks, and the night went on.

Buckle up, and enjoy the ride.