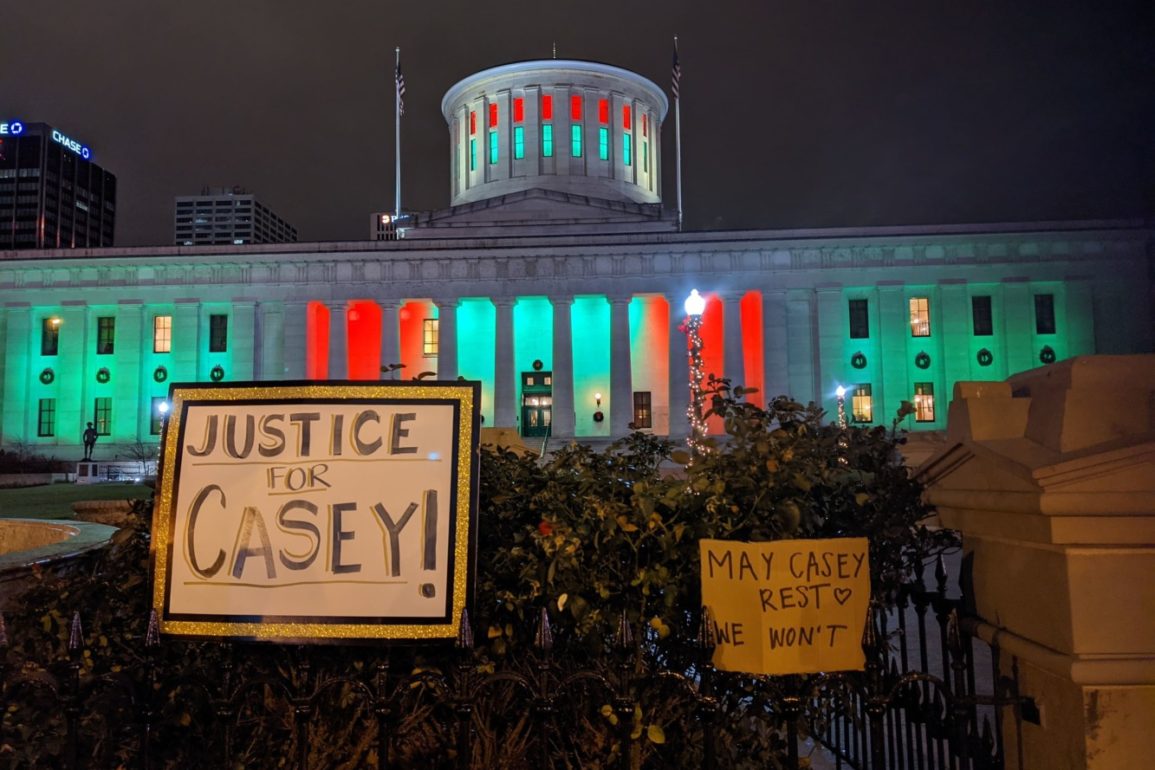 Organizers held a vigil for a Black man shot and killed by an officer in front of the statehouse on Saturday, laying out demands, chanting and putting up signs. |Jaelynn Grisso, Matter News

“Family of Columbus man killed by officer say the police are lying” was originally published by Matter News, a local news nonprofit in Columbus, Ohio. Sign up for their newsletter here.

An officer shot and killed a Black man in north Columbus on Friday, and now, the victim’s family is pushing back on the officers’ account of the shooting.

On Friday afternoon, December 4, a 17-year veteran of the Franklin County Sheriff’s office who is permanently assigned to work with the United States Marshals fired three shots into a 23-year-old Black man. The man — later identified by the Columbus Division of Police as Casey Christopher Goodson Jr. — was taken to OhioHealth Riverside Methodist Hospital, where he died.

The officer who fired the shots was identified as Jason Meade by a press release from the sheriff’s office sent on December 6. Meade is currently not on duty and is awaiting an interview with the Columbus Division of Police, according to the release.

Soon after the shooting, a spokesperson for the U.S. Marshals laid out what the officers claimed happened. He said the officers saw the man waving a handgun while driving and fired shots when he did not comply with orders to drop his weapon.

Family members, on the other hand, say Goodson was carrying a sandwich, a mask and his keys and was walking into the house when a police officer shot him. They claim the officer shot him in the back.

Here is what we know so far.

Police claim Goodson was armed, and it was likely a justified shooting

The Franklin County Sheriff’s Office SWAT team had been unsuccessfully searching for a fugitive on Friday when a man passed them in a car while waving a handgun, according to a spokesperson from the U.S. Marshals. Officers on the scene would not confirm the victim’s identity at the time of the incident, according to ABC6, but Columbus police later confirmed his identity as Goodson on December 6.

Peter Tobin, with the U.S. Marshals for the Southern District of Ohio, confirmed the man shot wasn’t the target of the initial arrest warrant but said that, as the deputies and marshals were wrapping up, he drove by brandishing a weapon, according to the video of the scene from ABC6.

A 17-year veteran FCSO Deputy assigned full time to the US Marshal Task Force was involved in the deadly shooting of a 23-year old man Friday afternoon. The US Marshal’s Office says the suspect’s weapon was recovered at the scene. The shooting remains under investigation pic.twitter.com/pnH0xZrogM

Tobin said the man was asked to lower his weapon, but he did not comply and instead drove off, with the officers in pursuit. When he stopped, he was confronted by officers who ordered him to put the weapon away and shot him after he did not follow that command, according to Tobin.

“He was seen driving down the street waving a gun. That’s when the deputy, at some point after that, confronted him and [things] went badly,” he said at the scene.

Tobin also added that his “prediction is it was a justified shooting.”

Glenn McEntyre, assistant director for department of public safety, clarified a few points in an email on December 6.

He said there were no other officers who witnessed the shooting and “no civilian eyewitnesses have been identified.”

He also clarified that the “shooting occurred in the jurisdiction of the City of Columbus but did not involve any Columbus Police Officers,” he wrote in the email. “Therefore Columbus Police Critical Incident Homicide Investigators are the primary investigators who are charged with gathering and documenting the facts of this incident.”

Columbus Police Chief Thomas Quinlan released a statement about the role of the Columbus Division of Police in the incident.

“The Division will provide all evidence to the prosecutor and will maintain transparency with our community regarding this investigation as appropriate. We ask for the community to rely on the facts, avoid sharing the kind of misinformation that runs rampant on social media, and as understandably difficult as it is, to be patient for those facts to be established,” he said in his statement.

The family account of what happened is different from what officers on the scene relayed. Goodson’s mother said the officer shot him as he was walking into the house.

“They shot him in his back three times. He had food in his hands and was unlocking the door walking in. He was in between the screen door and big door when the officer shot Casey made it thru the door and fell on the floor hands the fuck up his food his mask and his air pod were all right there with him,” said his mother, Tamala Payne, in a social media post. Tamala declined to comment, saying the family is not speaking to the media until they have legal representation.

On Twitter, his sister Kylee Harper stated that her brother had been walking from his car trying to get into his house.

“My brother literally walked across the yard, walked into the back fence to get to the side door, had his subway and mask in one hand, keys in the other,” Harper tweeted. In a similar post on Facebook, she explicitly said the officers were lying about what happened.

“He was in that black car walked from the black car past the front of our house through the gate to the door, and in our house, he was shot in his back through his screen door!” she wrote. “If he was waving his gun around, why didn’t y’all handle it when he parked and got all his stuff out of the car? He had no clue of what was happening, my poor brother,” she wrote in the post.

It’s unclear exactly who was present at the shooting time , but several family members of Goodson claim two children were present, including Goodson’s 5-year-old brother. In an interview with ABC6, Tamala said it was her 5-year-old that called her after the police shot him.

The family has also shared information to clarify whether Goodson legally had the weapon that the police allege he was brandishing. Police have not commented on this issue directly, but many family members claim he had a concealed carry permit.

Tamala, Goodson’s mother, posted a picture of his concealed carry permit on Facebook, showing the public that he was licensed in Ohio — which is an open carry state — to have a gun. Several of his siblings followed suit.

In the aftermath, many questions remain

But the Franklin County Sheriff’s office doesn’t use body cameras, Marc Gofstein, a spokesperson for the office, said via email. He added that he didn’t know “if the other agencies who were a part of the operation do.”

In an online petition, several other demands are laid out as well, including firing the officer who shot him, trying that officer for murder and divesting in policing in Columbus. At the time of publishing, the petition has 2,718 signatures.

The petition also includes several demands on the Civilian Review Board, which is being created after an amendment to create the board passed in November in a landslide victory with 74% in favor.

After the Columbus Division of Police finish with the investigation, they will provide their findings to the Franklin County Prosecutor, who will then present those findings to a grand jury. The grand jury will ultimately decide if the shooting was justified.