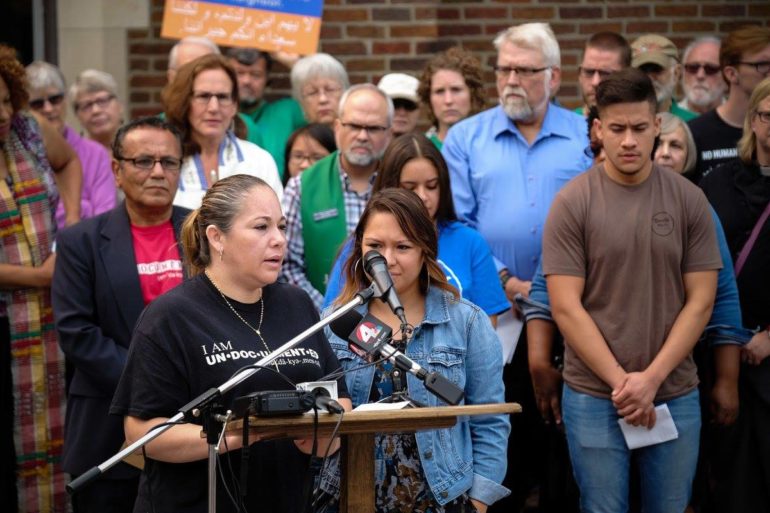 Edith Espinal has returned to the safety of the church, but that doesn’t mean she’s done fighting.

You may remember Edith Espinal from about a month ago when she was offered sanctuary at the Columbus Mennonite Church in Clintonville. A lot has happened since the Mexican immigrant and mother of two was granted asylum, her story has become a veritable roller coaster of emotions and plot twists.

Espinal, whose children are both American, was issued orders for deportation by Immigration and Customs Enforcement (ICE). Not wanting to leave her home or her family, she sought help from the church which immediately and unanimously agreed to grant her a stay of sanctuary.

The ICE considers churches and religious institutions a special or “sensitive location”.

Essentially it means that forceful arrests and deportation are difficult (but not impossible) to carry out there. It’s not exactly a legal practice but there’s certainly a precedence as churches all over the nation have taken in refugees in the wake of President Trump’s harsh immigration policies.

After Espinal was originally given sanctuary, she actually left the confines of the church, intent to plead her case legally and soundly before the ICE. She met with officials at Leveque Tower while dozens of demonstrators stood outside, chanting words of encouragement. “Keep Edith Home” they would shout as they waited for word of the ICE’s decision. Ultimately, the federal organization again denied her application to stay.

She was then forced to purchase a plane ticket to Mexico, her flight scheduled for this past Tuesday.

But rather than taking the flight, Edith has just recently again sought shelter at the Columbus Mennonite Church in Clintonville. She plans to stay there for months or years, as long as it takes for the federal government to reconsider her legal stay within the U.S.

But Edith Espinal doesn’t just plan to sit idly by. She has issued a challenge to Senators Rob Portman and Sherrod Brown, as well as Governor John Kasich, to visit her at the church and to listen to her plea in person.

Whether or not these politicians plan to meet with Espinal in person has yet to be determined.

What has been determined, however, is Espinal’s decision to keep her family together. To fight for her right to love and liberty in the country that her children were born, that she and her loved ones call home.

To show support for Edith and her family or for more information, visit the Facebook page Solidarity With Edith Espinal.