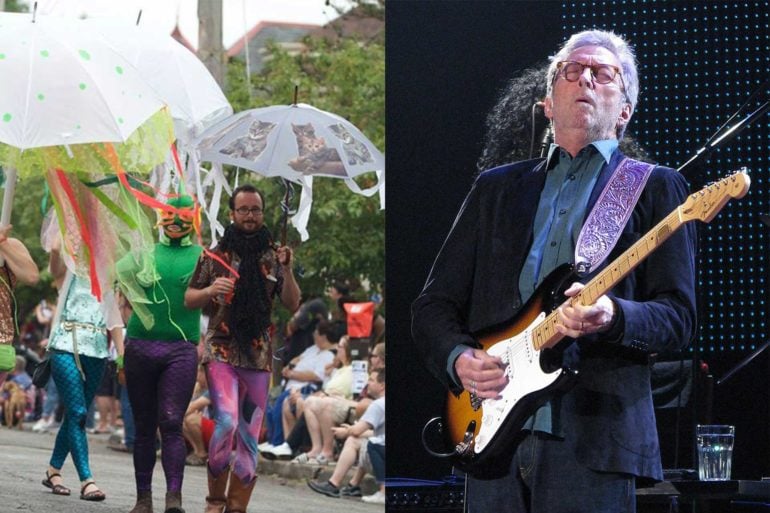 Columbus’ weirdest parade is on the hunt for an epic Grand Marshal.

The Doo Dah Parade may not be everyone’s cup of tea, but I’ll sip on it all day long. It’s weird, unique, and most importantly, super fun. This year, the Queen of Doo Dah Parade herself, Deb Roberts is on a campaign to make Eric Clapton “Less-Than-Grand Marshal” of the parade.

In a Facebook post, she shared the details in the hopes of piquing the interest of Columbus’ most elusive resident.

My name is Mz Doo Dah, ChairChick & Queen of Doo Dah Parade, Deb Roberts and I am writing to invite you to be Less-Than-Grand Marshal 2019.

Almost 2 decades of legendary Eric Clapton sightings has everyone in town intrigued and tingled by you. Stories such as Stauff’s in Grandview, Starbucks in German Village, grocery shopping in Powell, almost running over someone in Easton, and taking Woodland’s stage unexpectedly and thrilling the crowd. I’m so hoping that you will consider accepting the ridiculously fun and whacky position as Less-Than-Grand Marshal of the 36th Annual Doo Dah Parade, on Thursday, July 4th, 2019, in the Short North – where no one has ever reported seeing you there.

We’d love to have you in the Short North and be in the legendary (at least in our minds) Doo Dah Parade. It’s all about fun, laughter, and celebrating 1st Amendment Rights, through humor. We’ll set you up in a VIP comedy scene that I’m sure you’ll regret being involved in. Bring the wife, bring the kids. Celebrate liberty & lunacy on July 4th, Columbus, OH.

Please don’t be too slow with that hand, use it to email or call us and give Doo Dah Parade a yes!

Best Regards, Queen of Doo Dah
(no relation to the Queen of England), Deb Roberts.
www.DooDahParade.com

Clapton has shown up in unexpected places around town before, so this definitely isn’t out of the realm of possibility.

I wish the parade every luck in this endeavor. You keep doing you, Doo Dah!