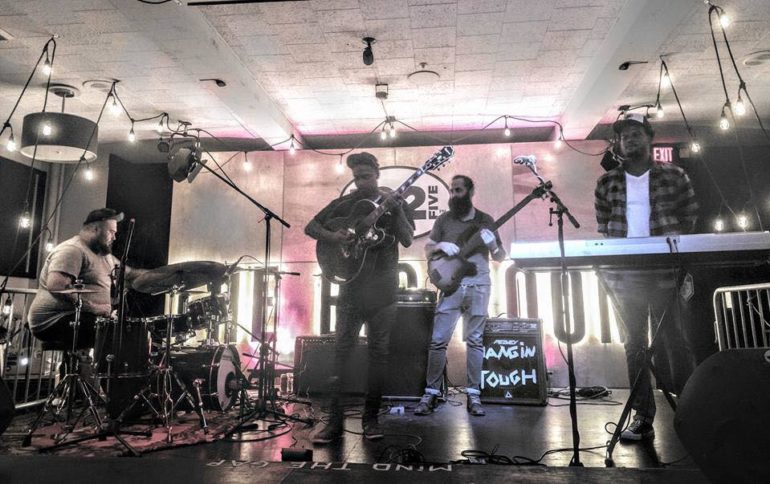 The Discordant And The Sublime: An Interview With Local Band OLDE FRNDS

How one local band uses music to celebrate kinship and the duality of human nature.

Random plucked notes bounced off of brick siding as I made my way down the steps and into the performance space. It was the familiar sound of instruments warming up, of acoustic guitar and fretless bass strings stretching and tuning before a show.

The venue was a small event and meeting area beneath a Donato’s Pizza directly off of High Street. Part of me wondered if it was entirely legal to host a show below a giant pizza chain like Donato’s. The red tape and bureaucracy must be a nightmare to put something like this together.

Then I realized that the location was literally across from OSU’s campus and that no one (especially the underage worker idling lazily at the counter) gave any sort of a damn about what went on in the basement.

Making my way down the bottom of the stairs, a friendly girl sitting at a side booth smiled at me from behind large framed glasses. She stamped my hand as I forked over 5 bucks for the entrance fee and I frowned as I realized she hadn’t checked my ID.

I was beyond too old for it to even be an issue but every once in a while it feels nice to not feel like I’m literally about to croak on my next birthday. By the time I bought a beer and settled at the bar my bruised ego had already healed and the band was ready to jump into their set.

Before they started there was something they wanted to do first, a matter of import they wished to address.

They brought up the Puerto Rican crisis and acknowledged the hardships the people there were suffering while our own federal government hesitated and flailed about in support.

As soon as they delivered their moment of awareness they jumped right into the music. Their set went hard and fast, a cacophony of jazz-like melodies, each musician shredding into tunes in their own way. You couldn’t call it jazz, not entirely.

It didn’t really hit on any one genre long enough to get pinned down. It just flitted about like a bird after a storm, from one perch to the next, not long enough to ever settle in or be pigeonholed.

And the audience was all about it. They crowded towards the band, heads and arms bobbing to the music. Their camera phones recorded and streamed live onto social media platfroms— the calling card of the young millennial.

They wrapped up their set by going into an instrumental cover of “Redbone” by Childish Gambino, with the band singing the words to “All-Star” by Smash Mouth over it in a microphone-less chorus of glee and barely controlled laughter. 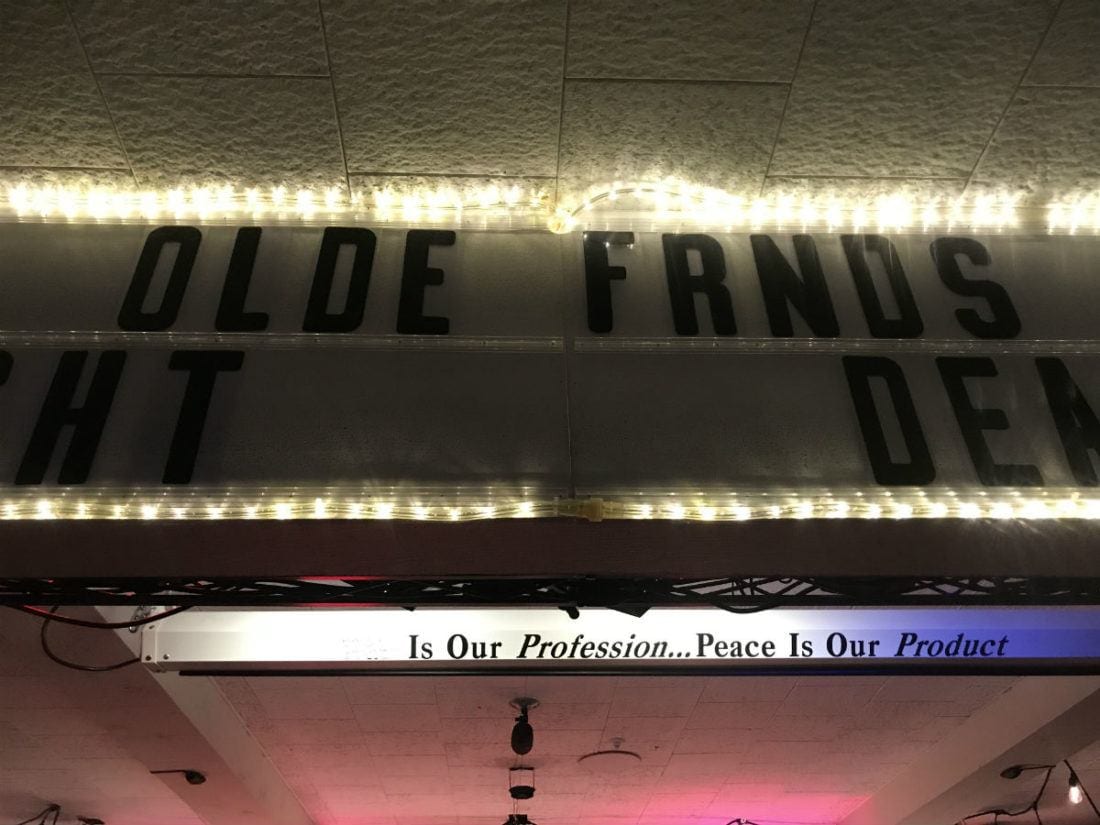 The crowd lapped it up, chanting and singing along.

Their music projected a sort of child-like exuberance, each band member grinning at each other manically without restraint or control. The band was called OLDE FRNDS, and they were what fun should sound like.

I caught up with Will Ong (drums), Dwayne Barnett (guitar), Carl Sigler (bass), and Ramsey Morton (keyboard) after the show and they agreed to an interview. We sat at the back patio table of a bar in Olde Towne East.

The night was warm but not humid. Lights strung up above illuminated the band’s faces. Their smiles highlighted as they laughed and tossed back beers. “Dreams” by Fleetwood Mac dribbled out lazily from an outside sound system, the voice of Stevie Nix drowned out by loud conversation and drunken laughter.

Describe your band’s sound. Try to use the word “sonically”.

Dwayne: I would say we have a pretty unique sound. It’s definitely jazz-based. It also has this radical, weird rock thing that we’re doing. We try to incorporate some technicality and music theory… I guess.

Will: The most unique part about it is definitely Dwayne’s use of acoustic combined with a delay pedal. Everything’s kind of amplified and doubled in rhythm. So instead of an eighth note, it’s a sixteenth. It makes a, you know, “sonically” sound.

The band then goes on a five-minute diatribe about Sonic the Hedgehog. It eventually culminates with everyone deciding that Will, the drummer and the only vegetarian in the group is, in fact, Dr. Robotnik. A mad scientist that transforms woodland creatures into robotic man servants. He seems disappointed. 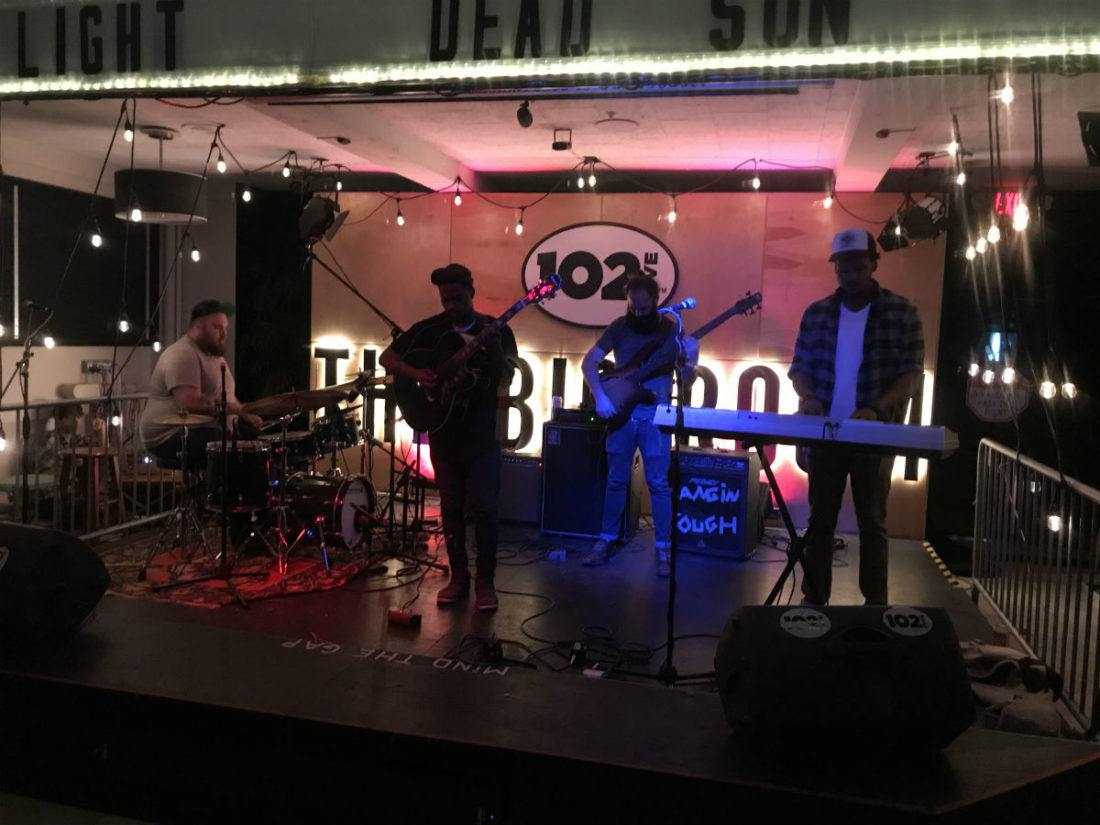 So how do you think tonight’s set went?

Dwayne: I think it went great. I think we all did really well. I could hear everybody, and from where I’m at, sitting next to the amps, I could only imagine what it would sound like.

Will: I think the best thing about the whole set was that it kicked off with awareness. And that was Ramsey’s idea. I mean it’s just sad. There’s no support going on over there.

Dwayne: It kind of brought it to their faces. This isn’t your Facebook post where you can put the flag as a filter, and just get by with saying ‘my thoughts and prayers’. Actual awareness is what’s going to make a difference. Or at least start to.

Ramsey: It’s crazy. There’s more support from the cruise lines. Private cruise lines are losing money to get rid of their passengers and ship stuff to Puerto Rico, emptying their hulls, and then ship people back.

Carl: People with private planes are doing that too.

Will: Anytime you can raise awareness about real-world stuff  that’s happening, you do it. We’re all very fortunate to be alive. I’ve died once in my life. One of my biggest things is you appreciate what you have while you have them because you never know. Things go south super quick. Just love each other, and appreciate that you’re here and how privileged you are to be in this country. And I’m a white male. I’m extremely privileged to be here and with all the dumb stuff that comes with that. Regardless of color, race, gender, whatever, you got to love everybody.

In 2008, Will suffered from a rare form of pneumonia called bronchiolitis obliterans organizing pneumonia (BOOP).

Tiny holes opened in his lungs and air seeped out and into his entire body. When doctors pressed on his chest you could hear crinkling from the air moving between the muscles, skin, and sinew.

At one point he lost consciousness while being moved, only to wake up to a nurse administering CPR. Doctors say he was out for two to three minutes. To this very day, every August, Will visits the nurse that saved his life, taking her out to lunch if she’s free.

The rest of the band showed heartfelt support while he recounted his story. More than just the music itself, you could identify a bond and a connection that comes out in their performance and in their presence on stage. It got me curious as to how long they’d known each other, how their unique bond solidified.

How did you all meet?

Dwayne: We all live here in Olde Towne East, we all met in the neighborhood.

Carl: I had maybe been to one practice, we barely knew each other. I was going to the grocery store and my key broke off of my front door. And I was just like [expletive] and just went back outside, and just stood there for a while. Eventually, Will rolls by and he’s like ‘hey man, what are you doing’. And I was like ‘apparently nothing, because I just broke my [expletive] key off my front door.’

Will: So I invited him to my taco party. I had a taco birthday party.

Dwayne: It’s like, we’re all neighbors. You can’t just call off from band practice. We can see you in your house watching Stephen Cobert.

Carl: Colbert? Is that what you think of me?

At that point everyone in the band pretty much lost it. Their laughter rang out over the patio. Other patrons, huddled around a bonfire that neither warmed them nor illuminated their faces, briefly glanced over before shrugging it off and burying themselves back into their drinks and stale cigarette smoke.

You guys have a pretty distinct, multi-faceted style going on. How do you go about rehearsing your music?

Dwayne: Our band practices are pretty bad. We try to pick a song to warm up to in the beginning. Never happens.

Will: We end up jamming out to something for about an hour.

Dwayne: We’ll give ourselves a plan for practice and we just won’t do it. Because our parents told us what to do and we didn’t [expletive] do that either.

Carl: Someone will hit a chord and we’re all like ‘OooOOOoooh!’ And we’ll just play with that for two hours.

Ramsey: And when we’re jamming too, nobody’s too selfish.  Everyone, we all want each other to shine. When I’m structuring jams I’m asking myself, ‘how can Dwayne shine, how can Carl shine, how can Will shine’. That’s how I come up with chord progression. I think it’s dope. Because everyone will take a step back and let the next person go.

Will: We actually hang out together. It’s not like we just go to practices and gigs, we’re excited to see each other.

Ramsey: It’s the comfort level. Not just musically but personally. To just say something and they can understand.

All too often music is used as a mask. Rather than exposing ourselves or our emotions, we blanket ourselves in something sugary and bubblegum sweet. Fun pop tracks meant to distract and to numb, not to unearth and examine.

They defiantly acknowledge human suffering and social injustices. Accepting people’s own ugliness, the off-kilter, discordant notes that create the tapestry of humanity’s jazz.

But they too also embrace the sublime. The beauty of diversity and the art that goes into crafting kinship as well as music. To them, to accept one is to accept the other. Not just in and of the world around them, but within themselves and each other too. To celebrate and exalt their own individuality and diversity.

As Funkadelic ever so perfectly put into words in 1978, it’s all “one nation under a groove, and there ain’t nothing wrong…”

You can catch OLDE FRNDS October 19 at Spacebar with fellow bands Surfer, Wheel Barrow, and Enjoy the Weather. For more info on the band visit their Facebook page at OLDE FRNDS.