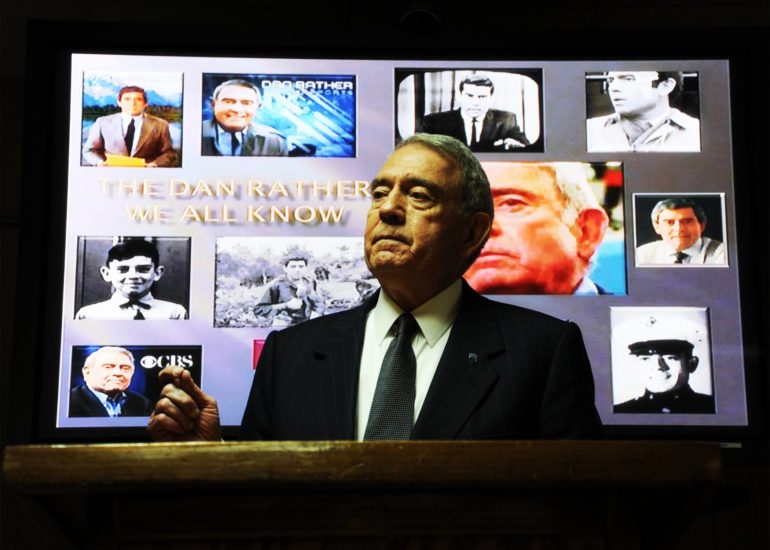 Dan Rather, anchor and editor of Dan Rather Reports on the cable network HDNet, speaks before a group of North Atlantic Treaty Organization Training Mission Afghanistan commanders in the Leadership Conference Room on Camp Eggers, Kabul, Afghanistan, July 27, 2011, about his experiences in his 61 years of journalism. He spoke in depth about the historical and tumultuous relationship between the media and military, and the role each has played in American opinion. Dan Rather and his HDNet production team toured various training, recruiting, and educational centers around Afghanistan collecting footage for a segment set to air in early September this year on the coalition to Afghan security forces transition.
News

Here’s Your Chance To Spend An Evening With Dan Rather

Legendary journalist and author, Dan Rather, will be joining guests for a special presentation on July 25.

The Friends Foundation of Worthington Libraries and the Columbus Metropolitan Club are hosting “An Evening with Dan Rather,” an event focusing not only on Rather’s contributions to the world of journalism but a discussion of his latest book, What Unites Us: Reflections on Patriotism.

Rather began his journalism career in the 1950s, but he came into the national spotlight while working for CBS News covering Vietnam, the Nixon presidency, and the Watergate scandal.

For decades, Rather has been a welcome source of news in the homes of millions of Americans.

WBNS 10TV’s Scott Light, host of “Face the State” will be the event’s emcee and host for the audience Q&A. Following the presentation by Mr. Rather, books will be available for purchase and signing. Tickets are $45 for members of the Friends Foundation of Worthington Libraries and Columbus Metropolitan Club and $50 for the general public.

The event will be held at Villa Milano, located at 1630 Schrock Road. An Evening with Dan Rather is sponsored by the Friends Foundation of Worthington Libraries, the Columbus Metropolitan Club and Gramercy Books, with support provided by WBNS-10TV and the Columbus Dispatch.