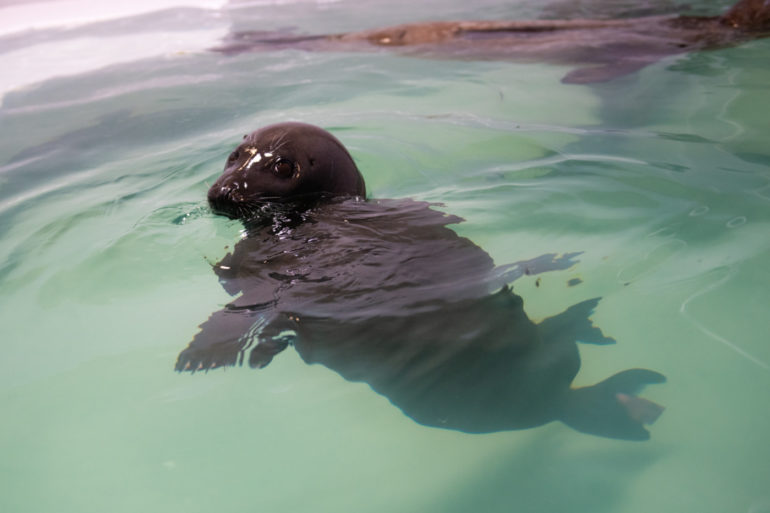 Some new, adorable creatures have officially joined the Columbus Zoo and Aquarium family.

10 California sea lions and 4 harbor seals arrived safely from Florida at the Zoo last week and are settling into their new surroundings. Construction on Adventure Cove kicked off in October 2017. The area features a Pacific Northwest-inspired rocky coast and harbor setting for these adorable animals, as well as Jack Hanna’s Animal Encounters Village, a colorful and immersive village highlighting animals from all around the world.

While a specific date has not yet been set and the Zoo remains closed to the public to help reduce the spread of coronavirus (COVID-19) within the community, Adventure Cove is on target to open in summer 2020.

“Even during this incredibly challenging time as we’re all impacted by the effects of a global pandemic, I am reminded how much our community continues to come together as we focus on the future. Adventure Cove is truly going to exemplify our organization’s mission to lead and inspire by connecting people and wildlife,” said Columbus Zoo and Aquarium President/CEO Tom Stalf.

As with the Zoo’s other newest regions such as Polar Frontier and Heart of Africa, Adventure Cove has been designed with the same spaciousness and naturalistic, mixed-species settings in mind. The harbor seals were born at SeaWorld Orlando and will live with the sea lions, as these species would encounter one another in their native ranges. Three of the sea lions were also born at SeaWorld Orlando and have been introduced to the others to expand the group, as sea lions are highly social.

Although the other six sea lions were born at different facilities all over the world, they have lived together for about 10 years at a marine park in Shanghai, China called Changfeng Ocean World. The park was looking for the best possible new home for their sea lions and chose the Columbus Zoo.

The animals’ social structure is a very important consideration for their wellbeing, and the Columbus Zoo and Aquarium is in the unique position of both planning a new sea lion habitat and having the capacity to keep all of the animals together to preserve their social structure.

Two of the sea lions who arrived from China also bred, resulting in one male pup born in 2018. The sea lions had been receiving care since 2017 by the Columbus Zoo team in a custom-built interim home at a facility in Florida until it was time for them to come to Ohio.

“The arrival of the sea lions and seals is extremely exciting. Months of positive reinforcement training helped prepare them for their move, and they are adjusting smoothly to their new surroundings,” said Suzi Rapp, the Zoo’s Vice President of Animal Programs. “Not only do they continue to do very well as a strong social group, but they also share an incredibly close bond with their care team, who cared for them in Florida and who moved with them to Columbus.”

Additionally, Adventure Cove will further the Zoo’s commitment to sea lion rehabilitation initiatives. There are plans for the Columbus Zoo to provide a home for at least one rescued animal in the future and they’ll also be providing permanent homes for non-releasable rehabilitated animals.

You can learn more about Adventure Cove and it’s inhabitants, as well as updates about when the Zoo will reopen here.