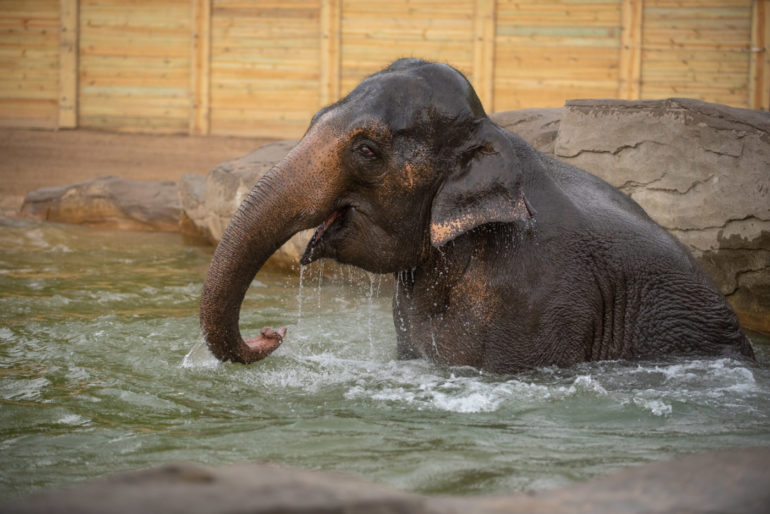 The Columbus Zoo and Aquarium family is growing by a ton.

Asian elephant, Phoebe, is expecting a big bundle of joy this summer, so when I say “a ton”, I really mean it. Phoebe is in her third trimester and the zoo is expecting her to give birth to her calf in mid to late June.

Elephants have the longest gestation of all mammals and they’re pregnant for roughly 22 months. When the newborn arrives, it could weigh anywhere from 200 to 300 pounds and stand approximately 3 feet tall. Talk about a big baby!

Phoebe has a great relationship with her Animal Care team, so they’ve been able to get regular ultrasounds of the calf’s development. The Animal Care team will keep monitoring Phoebe throughout her pregnancy and the sex of the calf will be discovered once she gives birth.

Phoebe first came to the Columbus Zoo in January 2002 and she lives in the Asia Quest region of the zoo alongside males Hank (the calf’s father) Beco (Phoebe’s son), and females Connie, Sunny, and Rudy. The birth of an Asian elephant calf is good news for conservation efforts. Populations of Asian Elephants are in rapid decline in their native range.

“Every elephant calf is precious and vital to the survival of this endangered species. We are proud to celebrate Phoebe’s pregnancy with our fellow zoological colleagues and conservation partners, as well as our Central Ohio community and beyond. Conservation is a collective effort, and thanks to everyone’s involvement and support, together we can continue working toward achieving these milestones that contribute to efforts protecting the future of elephants and other incredible species,” said Columbus Zoo President/CEO Tom Stalf.

There’s already a lot to look forward to this summer, but an adorable baby Elephant certainly climbs to the top of the list. We can’t wait to meet Phoebe’s calf! For more info about the Columbus Zoo and Aquarium, you can visit their website here.