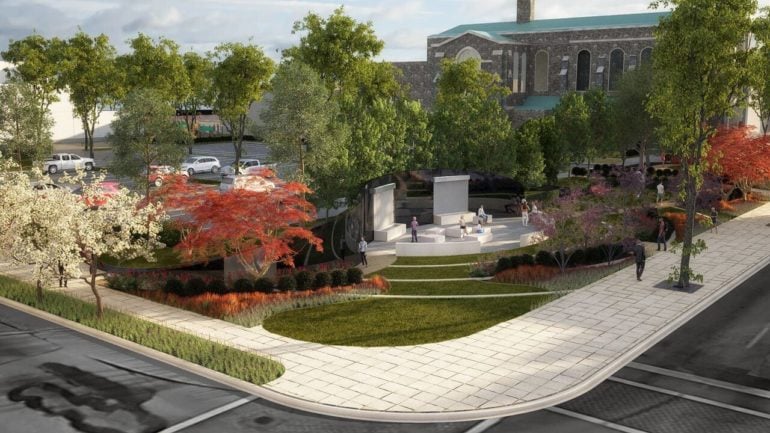 Columbus Will Be Home To The First Social Justice Park Ever

The 3.7 million project will break ground on March 27, 2018. Over the next 6 months, the lot will be transformed into a unique park, with water features, artwork, green space, and a pathway with quotes about justice.

The groundbreaking ceremony will begin at 11 a.m. and it is free and open to the public.

The City of Columbus will have the very first park dedicated to social justice thanks to the First Congregational Church, United Church of Christ of Columbus. The park will sit on the corner of Broad Street and Cleveland Avenue.

“Our focus is to have it as a community park,” said Tom Worley the Park Planning Group Chair. “Our hope is to open the park next summer.”

The new green space is part of the 2010 Downtown Columbus Strategic Plan. This plan is part of the city’s effort to continue to improve the downtown area. The park will fall into the Creative Campus, an area that includes the Columbus Art Museum, the Columbus College of Art and Design, and Columbus State Community College.

The church’s heritage is the reason why the new park will be a social justice park. First Congregational Church was established as an abolitionist church. It can trace fighting for equal rights all the way back to its beginnings in 1852.

“Our local church has been very involved in social justice issues for the last 150 years,” said Worley. “So, it’s part of our DNA.”

The park will be named after Rev. Dr. Washington Gladden. Gladden was a minister at First Congregational Church UCC during the turn of the 20th century. Not only was he heavily involved in the church, he was very involved with the community. Rev. Gladden was an advocate of many causes including racial equality, religious tolerance, workers rights, the right to clean drinking water. By naming the park after Rev. Gladden, the church hopes to honor his memory and encourage others to fight for their community the way he did.

The Social Justice Park will get the community talking about the issues in our country and society through various art displays, according to Worley.

“The art in the park is meant to be very interactive—more hands-on type of art,” he explained.

The church brought the plans before the Downtown Commission in May 2017. Worley said he thought it went well. On First Church’s website they said, “Commission members provided strong support for the project with very positive reviews. Comments included: “super”, “terrific”, and “love it”.

When I asked him what he was most excited about when it came to the park, Worley said with a laugh, “That it’s going to happen!” He continued, telling me why he’s thrilled about what this park will give to the city of Columbus.

“This can become a place for awareness, reflection, and constructive community dialogue,” said Worley.