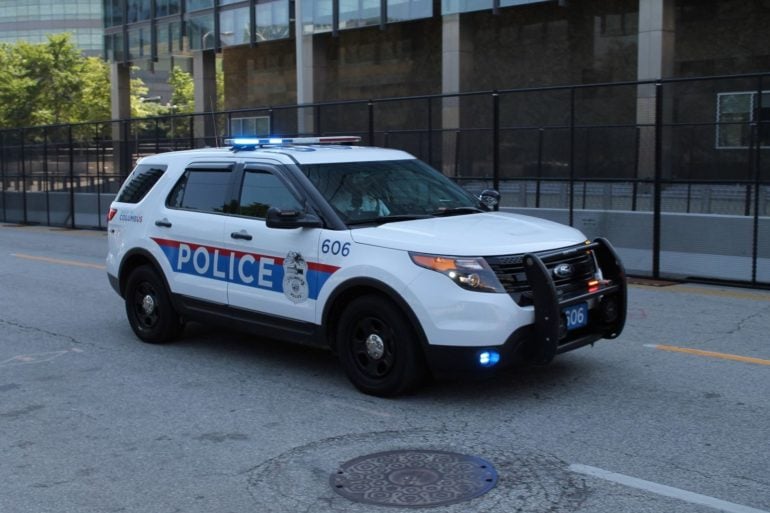 “I feel very violated by the state”

Mason Hickman distinctly remembers the burning sensation as he inhaled a waft of tear gas on the Ohio Statehouse lawn when police used the chemical agent to disperse a group of peaceful protesters.

Afterwards, he felt exhausted — likely because of the blistering summer heat, he thought.

That day, Hickman — a transgender man whose testosterone hormone treatments, in combination with an IUD, stopped his menstrual cycle for years — started his period.

Tear gas, or CS gas, is a chemical compound readily used by police departments across the country as riot or crowd control during the months’ protests against police violence. Columbus Mayor Andrew Ginther and city officials announced Tuesday night that police use of chemical agents, like tear gas and pepper spray — which are internationally banned from warfare — should be limited to “clear instances of violence.”

Acute tear gas exposure causes burning of the eyes, blurred or impaired vision, irritation of the nose, throat and chest, and possible third-degree chemical burns, according to the National Library of Medicine. And while there is little definitive research on the long-term effects of acute or continued exposure to tear gas, circumstantial studies in Chile, Bahrain and Palestine link the chemical agent to increased numbers of miscarriages in exposed regions.

“Tear gas is a dangerous, volatile compound that has been proven to have significant impacts on the reproductive health of those exposed to it,” Laurel Powell, spokesperson for the Planned Parenthood Advocates of Ohio, said. “We support discontinuing its use in all cases, including against peaceful protesters as we’ve seen in recent weeks here in Columbus and across Ohio.”

Charlie Stewart — a lead organizer for a Black, queer and transgender grassroots organization, who identifies as transgender and uses they/them pronouns — said they were exposed to tear gas seven or eight times within a few hours.

A few days later, they started menstruating, which was abnormal for their clockwork-like cycle. Stewart continued bleeding for three weeks. Stewart also suffers from Crohn’s disease, an inflammatory bowel disease, which they said was exacerbated by the tear gas inhalation, causing them to restart treatments and diet regimes.

“I feel very violated by the state,” they said. “I feel like I have no agency over my body right now and that is one of the most violent things to be done to an individual. And (the psychological effects) knock you down so far that you don’t even want to leave the house.”

I’m a mess…I just started my period AGAIN. That’s the third time since repeatedly heavily exposure to tear gas in the uprisings.Others are saying regardless of IUDs or taking T, they’re having multiple periods too. @ColumbusGov tell the people what’s happening to our bodies.

A 2017 systematic review of casualties caused by CS gas recommends use of crowd-control weapons, like tear gas and pepper spray, be limited to “situations where particular individuals pose an imminent violent threat,” or when “widespread violent acts … pose a imminent threat to public safety” — similar to the guidelines Ginther enacted Tuesday. The study also concluded that in most reported tear gas casualties, neither of these conditions were met.

Stewart said the city’s precedent is too vague, and still leaves people vulnerable to targeted attacks by the police.

“We know — many Black people know — that our skin tone alone is a threat and is considered violent,” they said. “If we’re going to set up a process or system where we are going to depend on police to define what is violence and nonviolence, we have already lost. That’s going to equate to more Black pain and possibly more Black deaths.”

Stewart and Hickman both called for the divestment and redistribution of funds from police to education and community programs, a complete ban on police use of chemical agents, and that the city release a report about the potentially hazardous effects of tear gas exposure.

“(Officials) know how dangerous this agent is, and they don’t want to admit it,” Steward said. “I think it’s time to.”

The Columbus police union has pushed back against Ginther’s guidelines. The Columbus Dispatch reported Friday that Keith Ferrell, president of the Fraternal Order of Police Capital City Lodge No. 9, said at a news conference the directive leaves officers very few options to disperse a large crowd.