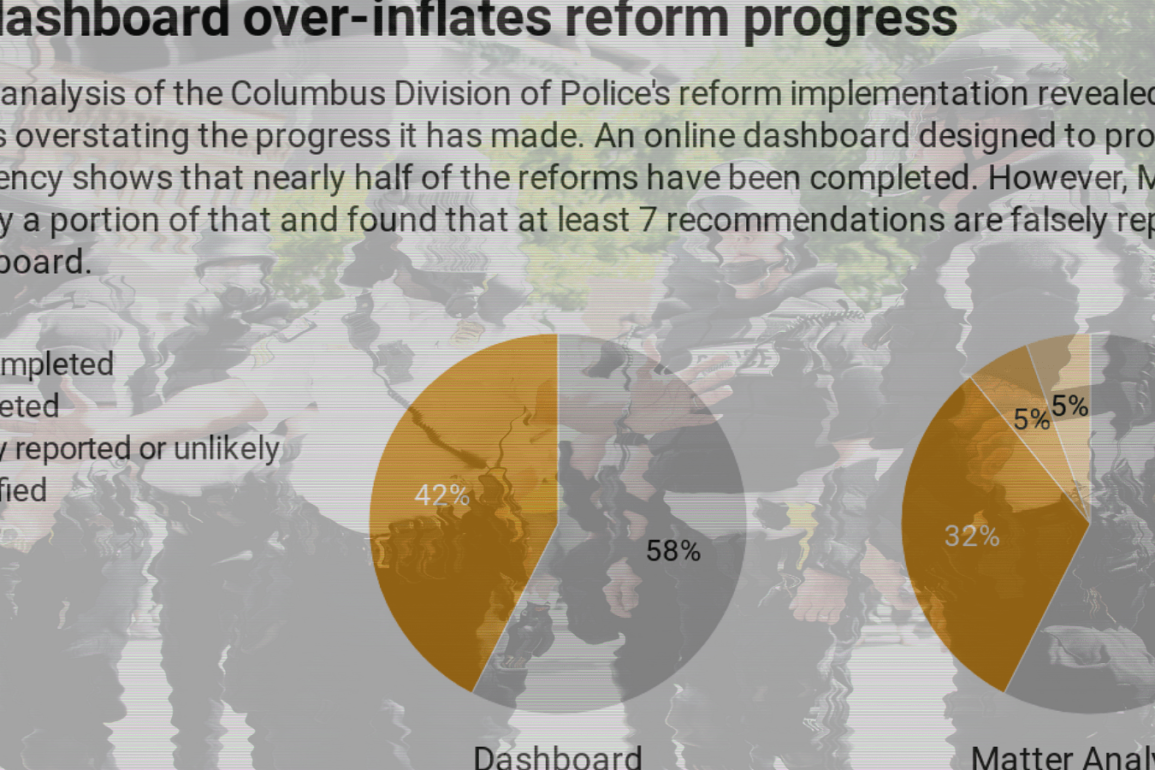 “Columbus police falsely reported progress on promised reforms” was originally published by Matter News, a local news nonprofit in Columbus, Ohio, on February 8, 2021. Sign up for their newsletter here.

This is the second in a two-part series analyzing the Columbus Division of Police’s dashboard on reform progress. Read the first part, “Quinlan stalled police reforms he opposed, leaked document shows” here.

Last October Chief Thomas Quinlan announced an accountability dashboard to keep the public up-to-date on reform recommendations he was supervising. At the same time, he was keeping his own private accounting of the progress he was making that didn’t match the public information.

But Matter has only been able to verify 19 of the 43 of those recommendations, excluding recommendations that focus on maintaining policies or changing personnel, rather than policy changes.

Of the 80 Safety Commission recommendations, 26 were shown as “Completed” on the dashboard, but only two were immediately verifiable. CPD has so far failed to provide verification of the other 24.

As for the Matrix Report recommendations, the dashboard shows that 67 of the 137 recommendations have been completed, but 50 of those focus on continuing existing policies or tweaking head count and do not include reforms or changes to current policy, which leaves only 17 that required program changes. Of the 17, 11 were quickly verified. CPD was asked for evidence to confirm the other 6 but did not provide it.

Nine of the ‘Completed’ reforms are actually still in progress, according to a leaked document

Several of the items marked as completed on the dashboard are not finished, according to a document leaked to Matter. The document, from January, provides notes from Quinlan on the progress of recommendations, including several recommendations with which Quinlan outright disagrees.

There are three items from Safety Commission and six items from the Matrix Report — for a total of seven recommendations — that are listed as Completed on the dashboard on October 28, 2020 but are listed as being in progress in Quinlan’s notes three months later.

Two relate to community relations. One recommends a Citizen Police Academy for minority communities to build relationships. Another recommends evaluating the community engagement of officers for effectiveness.

Quinlan notes that a survey was implemented to evaluate community engagement, but he added that “new survey methods [are] being developed and implemented” and marked the recommendation as ongoing.

Two others relate to officer wellbeing and leadership development. One encourages ongoing operational leadership development while the other would be a survey of officers to evaluate their well-being and job satisfaction. Quinlan’s notes reflect that the survey is in development and that a contract needs to be negotiated, despite the recommendation shown as “Completed” on the public dashboard.

The other two are facility recommendations. One asks for a second armored vehicle for the SWAT division and the other recommends an additional property room in a central location. For the property room, Quinlan has designed an alternative approach that accomplishes the same objective and has obtained funding, but notes it is still being implemented.

Even for recommendations that seem completed, questions around implementation remain

In many instances, Quinlan’s notes line up with the dashboard’s status. Eighty-one of the “Completed” recommendations on the dashboard are similarly marked in the former police chief’s notes. However, that doesn’t provide much detail about the reform implementation, and it’s hard to tell whether the reforms have been done with the intentions of the Safety Commission in mind.

“We can see that a lot of these are completed, but we don’t have the who, what, where, and how,” said Dr. J. Love Benton, a member of the Chief’s Advisory Panel.

For example, the very first recommendation on the Safety Commission’s list was to be allowed to continue their work. Quinlan’s notes point to the creation of the Chief’s Advisory Panel — with only two members from the original commission serving — as the action that satisfied this recommendation. But there are several key differences between the commission and the panel, including that the meetings are no longer open to the public.

Many of the recommendations involve new training initiatives. One that is marked as “Completed” includes the recommendation to increase the list of experts to include more subject matter experts who work in the discipline of the subject being taught.

Quinlan listed several staff in his notes who are existing staff that have been with the division long enough to have their pictures on the website. CPD has not provided a list of any new expert trainers that have been added.

One of the training recommendations is to explain the damaging effects that racism has on the community when used in law enforcement. A subject matter expert was not used for this training, according to a spokesperson from the CPD Training Academy. Instead, Sgt. Michael Kirk in the Advanced Training Unit of the Training Bureau narrated a training video titled, “Introduction to Cultural Sensitivity and Diversity.”

Shortly after the summer protests, he made these comments in a police Facebook group: 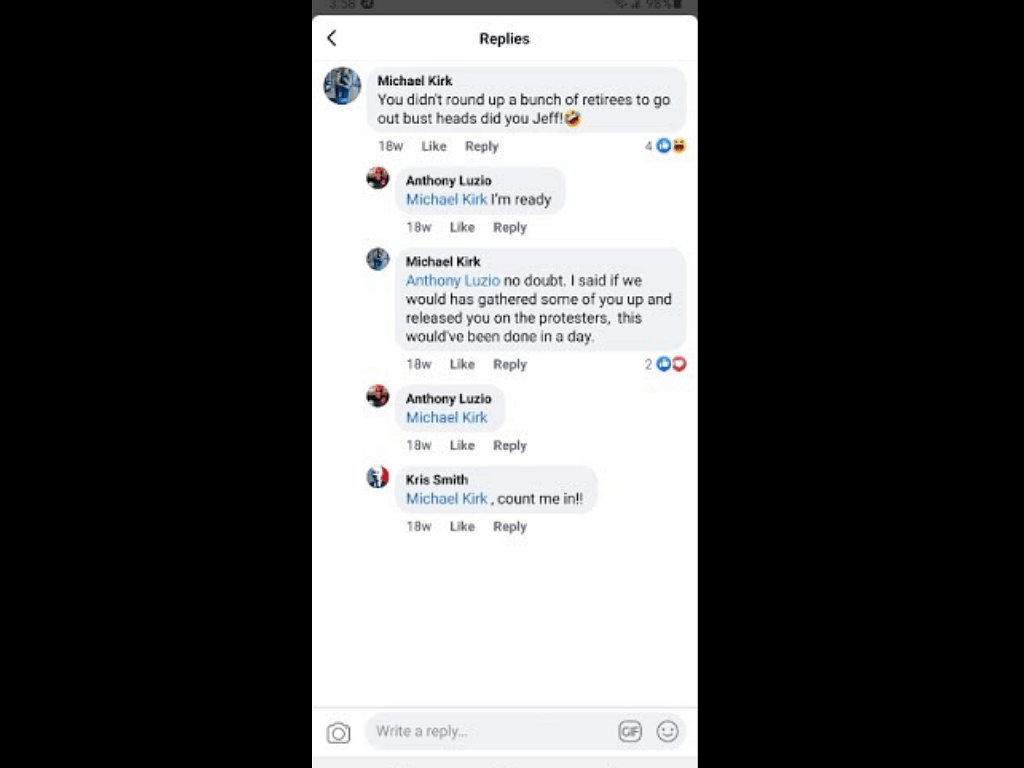 Another recommendation marked as “Completed” would continue to allow all Equal Employment and Sexual Harassment complaintants to choose to file their complaint in one of three places: the Internal Affairs Bureau, Assistant Safety Director Bourke or the City’s Equal Employment Opportunity office.

“It is true that we can file EEO complaints to all three offices, but when we file with Bourke she has IAB officers in the room during the investigations so there is only one choice to go outside the division,” according to Lt. Melissa McFadden, who has filed and helped others file several EEO complaints in her career with CPD.

Some other recommendations shown as “Completed” on the dashboard and in Quinlan’s notes seem as if they couldn’t be finished, given the timing.

Two of the recommendations were marked “Completed” by the end of October 2020, but they both relate to government actions that haven’t been done yet. One relates to establishing a budget that realistically meets the needs for the Recruitment Unit. Quinlan noted in the leaked document that the division used property seizure funds. But he doesn’t give any indication whether or not that will be the case for future years, and the City budget for 2021 has not been approved yet.

The other recommendation is to release diversity outcomes tied to an assigned deputy chief’s performance evaluation in the police division’s annual report. Last year’s annual report did include some diversity numbers, but the information is not as extensive as the recommendation has listed. This year’s report has not yet been released to the public.

About a quarter of “Completed” policy reforms remain unverified

There are eleven Completed recommendations that have not been verified independently or by CPD. In these cases Quinlan’s notes parallel the dashboard without any additional evidence of completion.

Most of those recommendations relate to training. The training areas include crisis intervention, the Columbus Oral Police Exam panel, language services, officer burn-out and coping mechanisms, use of virtual reality software and specialized weapons teams.

The others include the size of the recruiting staff and patrol divisions, co-recruiting of potential recruits to civilian jobs, a public survey of opinions toward the police and a whistleblower hotline.

When the dashboard was launched Ginther said, “We want the public to be able to help keep track of where each recommendation and initiative stands.”

Yet, the dashboard shows an inaccurate and incomplete picture of the progress toward Safety Commission and Matrix Report recommendations.

Nine of the 43 items marked completed do not appear to be complete, according to Quinlan’s own notes. Eleven others have not been verified independently or by CPD.

But CPD Public Information Officer Sgt. James Fuqua said he would look into the dashboard and data on reform progress.

“I’m stopping what I’m doing now to work on this,” Fuqua said. “I didn’t really read into the email as much to where I really understood the breadth of what you were looking for, meaning the lack of our accuracy in getting the data accurate.”