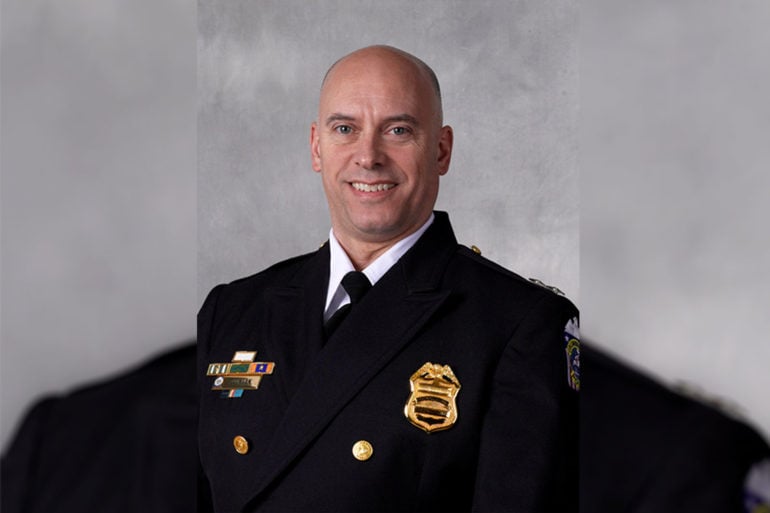 Mayor Andrew Ginther announced on Thursday afternoon that Chief Quinlan would be stepping down as chief of police on Friday.

The mayor’s office released a statement, saying Columbus residents have lost faith in Quinlin and in the Columbus Division of Police’s ability to implement reform and change.

Quinlan was appointed chief by Ginther in December 2019, after serving as interim chief for nearly a year. Quinlan was hired with a one-year probationary contract. Going forward he will assume a role as deputy chief.

Ginther received support for his decision to as Quinlan to step down from Columbus City Council President Shannon Hardin.

I support Mayor Ginther's decision to move forward with a search for a new Chief of Police as a way for our community to continue to heal. I appreciate Chief Quinlan's genuine efforts to push reform from inside the Division. Council remains focused on reform… https://t.co/tSNlP2g8C4

The change in management comes after a long year and an especially challenging December when the city of Columbus had to grapple with the heartbreaking deaths of two unarmed black men at the hands of police.

On December 4, Casey Goodson Jr. was shot by Franklin County Sheriff’s deputy Jason Meade. Columbus police are investigating the shooting after Quinlan’s request for intervention from the Ohio Bureau of Criminal Investigations was denied due to the organization being contacted too late.

Just a couple of weeks later, Andre’ Hill was shot in his friend’s garage by Columbus police officer Adam Coy. Coy shot hill moments after encountering him and was fired by Quinlan for failing to properly use his body camera and failing to offer Hill immediate medical assistance.

Quinlan’s demotion will go into effect on Friday. Deputy Chief Mike Woods will serve as interim chief while the national search for a permanent chief begins. Mayor Ginther announced that the search firm Ralph Anderson & Associates will assist the city in identifying a permanent police chief. You can read both Mayor Ginther and Thomas Quinlan’s full statements below.

“It became clear to me that Chief Quinlan could not successfully implement the reform and change I expect and that the community demands. Columbus residents have lost faith in him and in Division’s ability to change on its own. Chief Quinlan understood. He agreed to step back, so the city can move forward. I appreciate Chief Quinlan’s service to the community and the changes he was able to implement in his time as chief.

Deputy Chief Mike Woods has agreed to serve as interim chief while we begin our national search for a permanent chief. The search firm Ralph Andersen & Associates will again assist the city in identifying a permanent police chief on an expedited timeframe.

I want to assure Columbus residents that our commitment to change and reform will not wane as we seek the next leader of the Division of Police. In the coming weeks, I will appoint members of the Civilian Review Board that I championed and voters overwhelmingly approved in November. The Board will select an Inspector General, and we will gain civilian oversight of police for the first time in our city’s history. My proposed 2021 budget invests in non-police safety initiatives, including significant increases to mental health, addiction and recovery services and public health and social workers better positioned respond to people in crisis. The City will also invest in next generation body-worn cameras to ensure video and audio evidence is available when needed most.

I remain committed to meaningful, lasting police reform and confronting racism where it exists, advancing social justice so everyone in every neighborhood feels safe.”

“The opportunity to serve as your Chief of Police has been the honor of my career. While I very much hoped to continue in that role, I respect the Safety Director’s decision, and the community’s need to go in a different direction. We accomplished a lot in my time as Chief. We implemented dozens of reforms geared toward accountability, transparency, and strengthening public trust. Someone else will now carry those priorities forward, and I will help and support them in any way I can. In my three decades of service to Columbus, my commitment has never been to any title or position. It has been to this Division and this community I love. That will not change.”