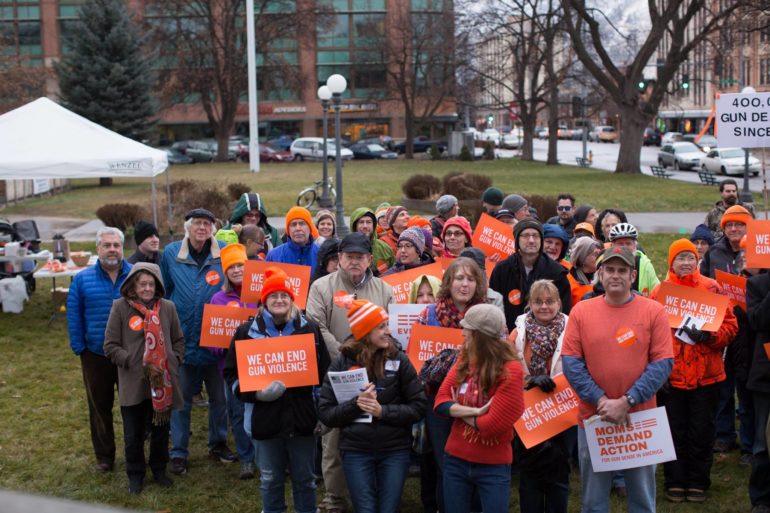 Columbus is full of incredible people doing amazing work of all types. I follow the social activism community in Columbus and one group that tends to always make themselves known is Moms Demand Action.

Moms Demand is the largest national organization that fights toward sensible gun legislation. Maybe it’s the hard to miss red shirts, their sheer numbers, or their true commitment to their cause, but whatever it is they’re always around. This weekend is Wear Orange Weekend and Moms Demand is leading the activities here in Columbus.

The first Friday in June has been declared National Gun Violence Awareness Day and the city will be lighting up orange this weekend in honor of gun violence awareness.

City Hall and Leveque Tower are amongst the buildings wearing their orange this weekend. This is the second year that Columbus will have proudly sported their orange.

Moms Demand Action has partnered with Power Radio 107.5 to host a rally and walk at Westgate Park this Saturday in honor of wear orange weekend. Check out the Facebook event here.

There are over 550 Moms Demand Action and Everytown For Gun Safety events happening in all 50 states across the country for Wear Orange Weekend.

Get your #WearOrange looks ready: We're ONE WEEK out from National Gun Violence Awareness Day on June 7!

Find a local Wear Orange Weekend event near you: Text ORANGE to 644-33. pic.twitter.com/RdRWhEDwrn

The color orange was chosen as the color for gun violence awareness because it’s the color that hunters wear to make themselves visible to protect themselves from other hunters. This color was chosen in 2013 when 15-year-old Chicago resident Hidaya Pendleton was shot and killed. Her friends decided to take action, wearing orange in support of violence awareness and asking for the rest of the country to support them by doing the same.

100 people are killed every day in the United States due to gun violence. Wear orange this weekend to show your support for the friends of Hidaya Pendelton and the fight against gun violence.

Then, on June 8-9, attend a Wear Orange Weekend event in your area. Text ORANGE to 644-33 to find an event near you! pic.twitter.com/uRVFkBMw2k

This bill would allow any Ohioan above the age of 18 to carry a firearm without a permit. Under this bill in the case of a traffic stop, a citizen would no longer be required to disclose their weapon to law enforcement officers.

“I just feel like our country has a public safety epidemic, public health epidemic and this bill does nothing to stop that. It will only exacerbate the problem,” said Tara Talgar, a leader in the Columbus Moms Demand Action group.

Filling the Statehouse during legislative hearings is one of the many ways Moms Demand seeks to bring attention to gun violence. Moms Demand member Richele O’Connor said that this weekend’s Wear Orange Rally is their most ambitious event yet and she has high hopes for the event’s success.

The rally will take place Saturday, June 8 from approximately 10:30 a.m. to 12:30 p.m. It’s a family-friendly event that hopes to bring the whole community together.

Billions Of Cicadas Will Emerge In Ohio This Summer. Here’s What You Need To Know