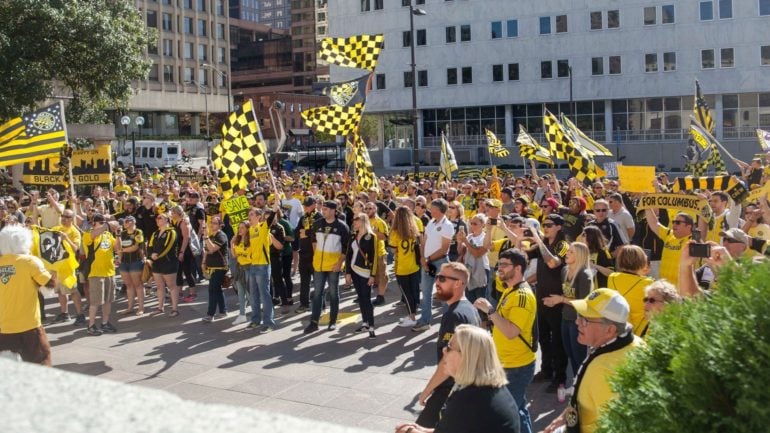 It’s official. The Crew will remain in Columbus.

“Major League Soccer and the Columbus Partnership have been working together for several months on a plan to keep Crew SC in Columbus and we have made significant progress.

Recently, the Haslam Family – along with the Columbus-based Edwards Family, have joined the effort to keep Crew SC in Columbus.

MLS, the Columbus Partnership and the investor group all agree that for the Club to be successful in Columbus, it requires strong local partners, long-term corporate support, a strong season ticket base and long-term plans for a stadium, practice facilities and associated sites.

MLS is committed to keeping Crew SC in Columbus should we continue to make progress on these critical components and agree to key terms with the investor group.

MLS recognizes the cooperation Precourt Sports Ventures has demonstrated throughout the process to date.

MLS also remains very committed to PSV’s plan to launch an MLS Club in Austin and is excited for Austin to become a great addition to MLS. We will continue to work with PSV and the City of Austin on the timing around the launch of Austin FC.”

“Major League Soccer is excited to move forward in Austin with Precourt Sports Ventures and their vision for Austin FC. Regardless of any scenario in Columbus, there is a clear path forward for PSV to operate Austin FC as a Major League Soccer club.

The strong support from Austin’s corporate community, government officials and passionate soccer fans is impressive. Austin is a flourishing, dynamic city that presents a great opportunity for MLS, and we look forward to finalizing plans to become the first major league team in the capital of Texas.

While timing for Austin FC is still to be finalized, we are confident that the team will begin play no later than 2021 at the new, privately financed stadium and soccer park at McKalla Place. We applaud the Austin community, city leaders and Precourt Sports Ventures for their commitment to making this happen.”

Joint Statement from the Columbus Partnership, Pete Edwards, Jr. and Dee and Jimmy Haslam on forming alliance to keep Crew in Columbus:

“We are excited to jointly announce that the Columbus Partnership along with a local investor group led by Pete Edwards, Jr. and Dee and Jimmy Haslam have formed an alliance to continue the collaboration with Major League Soccer to keep the Crew in Columbus.

We are optimistic about our recent conversations with MLS regarding the potential sale of the operating rights of the Columbus Crew.

While there are many details to be worked out, our alliance is working diligently and collaboratively with the League to keep the Crew in its community. We are very excited about the quiet but deliberate progress that has been made to date and will keep the community updated as this process moves forward.”

Statement from Alex Fischer, President and CEO of the Columbus Partnership:

“I am energized by the willingness of MLS to collaborate with us over the past several months. I appreciate Commissioner Garber’s personal involvement with the Columbus Partnership, the Haslams and the Edwards. Having community-oriented owners ready to purchase the team is a significant step forward in achieving our goal to keep Crew SC in Columbus.”

“This is great news for the City of Columbus. As I have said repeatedly over the past year, the Crew SC belongs in Columbus. There are many details to work out, but I am grateful for the Columbus Partnership, Dee and Jimmy Haslam, Pete Edwards, Jr. and all of the loyal fans.”

Rumors began swirling early Friday morning that the team would remain, but details were fuzzy. Although #SaveTheCrew confirmed that the team had been saved, they didn’t offer up any further information.

Rumors were swirling that Jimmy Haslam, CEO of the Pilot Flying J truck and owner of the Cleveland Browns, bought an MLS expansion and the history and branding of the Columbus Crew SC, allowing it to remain here. A fake account for sportswriter Grant Wahl even caused a kerfuffle on Twitter.

According to the real Grant Wahl and Sports Illustrated, the deal is done.

“After a year of uncertainty over whether owner Anthony Precourt would move the Crew from Columbus to Austin, Texas, MLS released a statement on Friday announcing that the Knoxville-based family of Cleveland Browns owner Jimmy Haslam and a Columbus-based investor group led by Pete Edwards, Jr., has joined together to move toward buying the Crew and keeping the team in Columbus.

The plans also include building a downtown soccer stadium in Columbus, and potential locations have already been discussed, according to a source with knowledge of the situation who spoke to SI.com.”

Of course, the reaction amongst fans, especially members of the #SaveTheCrew movement, was ecstatic.

I think I might need to take the rest of the day off. #SaveTheCrew

Also, I couldn't be more proud of Columbus and this community! Truly blessed to be from the 614! We are stronger together! #SaveTheCrew #SavedTheCrew

Fans were celebrating at Endeavor Brewing Co prior to the announcement when they were joined by Crew SC Defender Josh Williams.

The whole city is waiting (not so) patiently for the big announcement.

We will continue to update this post as more information becomes available.

Formal announcement expected in the near future. Stay tuned to official league channels for more information.