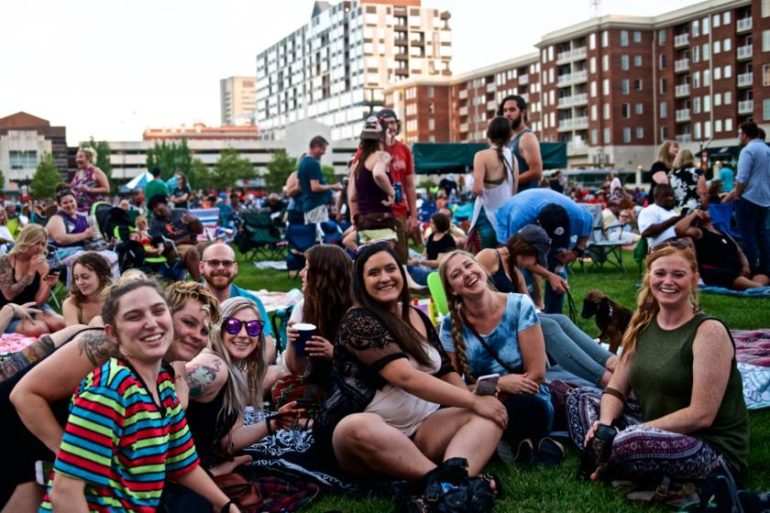 Downtown Live: MojoFlo
Things to Do

Summer in Columbus is rapidly approaching.

I love summertime in this city, mostly because there is always something exciting happening. From free concerts to sunburnt days at the zoo, summer is the best season in Columbus. (Obviously that excludes football season, Go Buckeyes!)

One of the best ways to pass the extra hours of daylight is heading down to the Columbus Commons for a little fantastic, and often free, fun! We’ve got the whole summer schedule for you right here, and spoiler alert: it looks freakin’ awesome.

When: Monday, April 22, 11am to 7pm
Details: Celebrate the start of the summer season as Tortilla and Jeni’s open at Columbus Commons. Take a spin on the carousel – rides are free on opening day!

When: Thursdays, 11am – 2pm | May 2 – October 31
Details: On one glorious day each week, food trucks invade Columbus Commons. CDDC will continue to offer the downtown daytime population access to Columbus’ best food trucks. Eight trucks will be featured, along with two rotating each month to provide variety for patrons.

When: Mondays – Saturdays: 12pm – 8pm; Sundays: 12pm – 5pm
Details: No matter what your age, there’s something irresistible about a carousel. Located
at the southern end of the park, the carousel is kinetic art in its finest form.

When: Saturday, May 25, 4pm – 8pm
Details: Family Funday is back! Families can enjoy carousel rides, inflatables, arts and
crafts, and much more! Many activities are free and some require a $5 wristband for unlimited fun. Stick around for a FREE showing of Ralph Breaks the Internet at 8:15 p.m., presented by KEMBA Financial Credit Union.

Free Shadowbox Live PerformanceLeather and Lace: A Tribute to the Women of Rock

When: Sunday, May 26, 6pm – 11pm
Details: Shadowbox Live will perform their newest show Leather & Lace: A Tribute to the
Women of Rock, featuring the music of Stevie Nicks, Pat Benatar, Heart, The Pretenders, and more! Bar and food trucks open at 6pm. Performance will begin at 8pm.

When: Fridays, 10am – 1pm | June 7 – August 9 (no event on July 5)
Details: Join us for Commons for Kids – a free weekly event for kids to get outside, jump
into the fun, and explore their creative side with different crafts and activities. These events will feature inflatables, activities, carousel rides, crafts and more every Friday from June to August!

When: May 2 – September 4; various days/times
Details: The league plays for two sessions, two game days a week, eight weeks per session from May to the end of August. Join a team or stop by to watch! Click here for more information.
3

When: Saturday, August 3, 6pm – 10pm
Details: Join us for a free event featuring The Navigators, a group comprised of Columbus executives and professionals playing high-energy rock tunes from the 1960s to today. Since their formation in 2003, The Navigators have helped to raise more than $200,000 to help local and national charities.

Free Shadowbox Live Performance, Back to the Garden

When: Sunday, September 1, 6pm – 11pm
Details: Celebrate the 50th anniversary of Woodstock with Shadowbox Live. Back to the Garden tells the story of Rodney Benton, a reporter for the New York Times sent to cover the Woodstock Music Festival in 1969. You’ll hear the best music of the era in what will certainly be a memorable night. Bar and food trucks will kick things off at 6pm.

When: Saturday, September 28, 12pm – 4pm
Details: Celebrate the very best of fall with Columbus Commons. From 12pm to 4pm, kids of all ages can enjoy bounce houses, face painting and tons of fall-themed activities.