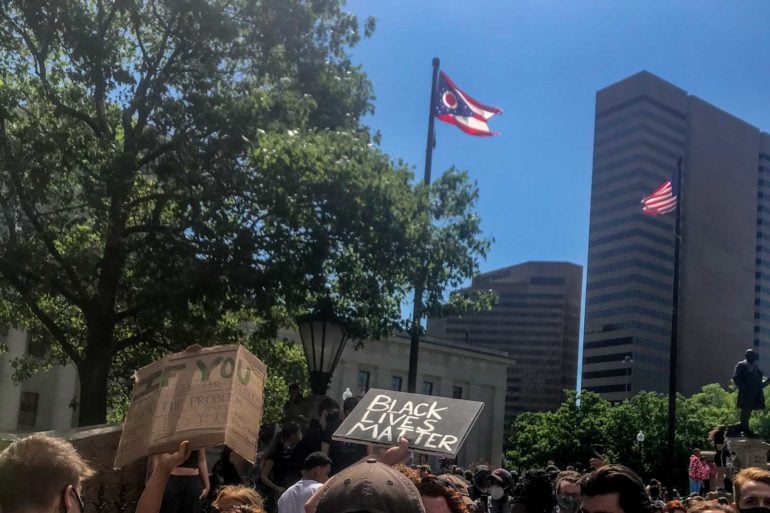 Over the weekend, businesses throughout downtown were collateral damage in the ongoing protest against police brutality. In the wake of the murder of George Floyd, protests have erupted across the country, with some of the countries largest cities taking to the streets.

While law enforcement in some cities like Flint have chosen to walk in support of the protesters, the reactions by police here in Ohio have been another story. Police indiscriminately fired tear gas, pepper spray, and rubber and wooden bullets throughout the weekend, and nobody in the area was immune including U.S. House Rep. Joyce Beatty (D) and city council President Shannon Hardin.

Throughout the city, business owners woke up to smashed windows and damaged properties. But instead of demonizing the movement, some business owners chose to stand up for the protesters. With messages spray-painted on plywood, local businesses left heartfelt words for those marching to end injustice.

Paradise Garage, Sole Classics, 934 Gallery, and Seven Studios were among the businesses damaged over the weekend to express solidarity with those protesting.

Some stores were taking precautions including closing early and boarding up, but they still made it clear that their support was fully behind the protests.

A post shared by J O L I E (@jolieoccasions)

In the Short North, The Garden acted as a hub for protesters, offering them a safe place to get water and recover from pepper spray and rubber bullets.

One of the most visible signs of support came from Orange Barrel Media, who chose to display a heart and George Floyd’s name at Broad and High, making it the backdrop for most of the protests.

In addition, several local business leaders have signed a letter asking that the City of Columbus declare racism a public health crisis. The Ohio Legislative Black Caucus has also called on the state to do the same.

Members of OLBC are joining in solidarity with @CleCityCouncil and @FranklinCoOhio and are now calling upon the State of Ohio to declare #RacismAsAPublicHealthCrisis We need white leaders to take action and help fight racism in Ohio and across our country. pic.twitter.com/OqFxWsyI3J

“Black America woke this morning to a nightmare that seems to never end and a continued feeling of hopelessness that nothing will ever be better,” said state Rep. Stephanie Howse, D-Cleveland, president of the OLBC, in a statement. “Black Ohioans deserve to be heard today, tomorrow and always.”