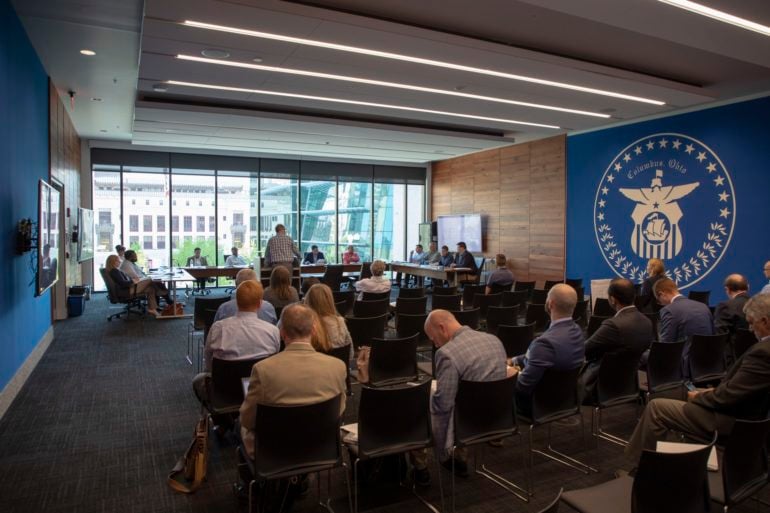 Meetings for the Board of Zoning Adjustments (BZA) don’t tend to fill rooms, even though it’s one of the only ways to hear resident testimony or learn who the board members are. Usually, the audience is about the size of the one pictured above from a BZA meeting on April 24. | Max Wrolstad, Matter News
Development

The Powerful Zoning Board You’ve Never Heard Of

The Michael B. Coleman Government Center, home of the department of development, looks like a chic library that had been converted to a DMV. That’s where most meetings regarding development are held, in bright, spacious rooms like the conference room I was in. The large windows behind the Board of Zoning Adjustments shed light on attendees while leaving the members’ profile in shadows.

The meeting played out in basically the same way City Council hearings often do: hear the proposal, briefly discuss, vote, and move on. Sometimes a proposal would go through so fast, I missed what was even being voted on. Occasionally a resident would give feedback on a proposal. It was the same woman all three times. Every application was approved.

The Board of Zoning Adjustments is one of the main overseers of development decisions in Columbus, permanently shaping how our city grows and evolves. Yet, there is very little public knowledge or awareness of it. So, I wanted to find out more about about this small, but powerful board. This is what I found.

Getting to know the BZA

Most governing decisions on development are made in the Columbus Department of Development. The Columbus BZA is one small important part of that complicated department. BZA, which is technically a quasi-judicial board, hears appeals, special permit applications and variance requests. Variance requests change development standards in the city’s zoning code, such as the number of required parking spaces per unit and height limitations for new construction.

But some zoning changes are made by City Council. So which body makes which decisions? Let’s say I want to build an office building, but the area I want to build it in is a residential zone, meaning buildings in that area are supposed to be for housing, not business activities. I would need to go to City Council to apply to change the zoning designation on that parcel of land from residential to commercial, making it possible to do business there. But what if city code states that a building can only be five stories on that parcel, and my building is supposed to be eight stories? That’s when I have to go to the BZA to request a “variance.” A variance allows me to build a structure that is prohibited by city code, and once it is passed, the code is permanently changed for that piece of land unless the variance is appealed or another one is applied.

“With a city as big as Columbus … one zoning code is not going to do it,” explained Anthony Celebrezze, assistant director of the Building & Zoning Services (BZS). BZS gives licenses and permits to developers. “Inevitably you’re gonna have variances to development standards depending on where you’re developing, what’s existing on a parcel, and what you’re trying to do there.”

However, applying for a variance from the BZA is no walk in the park. Remember the eight-story building? If I wanted a variance to allow its construction, I would need to fill out an application for review by the BZS, who helps me figure out what I’m able to ask for. Then, I need to conduct a field study that measures the impact of the variance and then present it to the BZS in order to get their recommendation. Simultaneously, I would also need to show the appropriate area commission — which makes development decisions for specific areas — my application and try to incorporate their feedback, which may or may not align with what the BZS is telling me I need to do.

After all of that has been settled, I present my application and study findings to the BZA in a public hearing where the board discusses the variance’s merits and listens to feedback from residents. When making decisions on whether or not to approve a variance, the BZA takes several standards into consideration before deciding: Is there a way to fix the problem without a variance? Will it alter the “essential character” of the neighborhood? Affect government delivery services? Did the applicant know the zoning restrictions at the beginning? And — maybe the most subjective of the standards — is the “spirit and intent “ of the zoning requirement being respected? If my application makes it past all of those tests, the variance is approved.

Let’s hear from the critics

Although it’s not very well known, BZA has not been immune to controversy. In 2016, the View on Pavey Square project was brought before the University Area Commission (UAC). Citing two University Area zoning plans and after 9 months of opposition from local residents, the UAC almost unanimously rejected the project: 15 of the 16 commissioners voted against it. However, the BZA still decided to approve the variance against the neighborhood’s wishes. They did require the development be reduced by 6 stories and changed to preserve some houses on High Street, but the UAC and many residents said they were still angry because it went against their legally binding plans.

In the past, University Area Commission President Doreen Uhas Sauer said that the relationship between area commissions and the BZA was much healthier, but has recently deteriorated.

“A year ago I would have said yes they want our opinion,” she said. “Now I wonder how much they want it. Their frame of mind is already made up.”

Some of the problems, Uhas Sauer said, have a simple solution: an open line of dialogue between the area commissions and the BZA. But others, such as Franklinton Area Commission member Trent Smith, the BZA does a good job of hearing from residents while balancing the economic impact a development project could have.

“They’re all good people trying to do the right thing,” Smith said. “I think that they have a process to listen to the neighborhood. To hear what the neighborhood has to say is a good thing, but it’s hard to challenge a project when there’s such a large dollar sign attached to it.”

It’s not just voting against area commissions that has some residents frustrated with the BZA. As the city code states, most BZA members should have specific expertise in fields related to development, but that also means that their professional lives could overlap with their duties on the BZA.

For example, the chairman of the BZA during the development of the controversial View on Pavey Square project was James Maniace. He was also the lawyer for the developers of the project, the same developers who were applying for a variance from BZA. He recused himself from the decision and discussions, but neighborhood activists and commissioners said they felt like it was representative of the conflicts of interest inherent within the Board.

“The real issue is that the BZA is so stacked with pro-developer interests that you can’t get a fair shake,” said Aaron Marshall, an activist and current UAC commissioner in a 2017 Dispatch article.

Who sits on the BZA?

The city code says that BZA consists of five members that serve for three-year terms. The mayor appoints them, at least three members have to be city residents and at least three have to be either an architect, lawyer, building contractor, professional engineer, real-estate broker or a mortgage banker. Their main responsibility is to hold a monthly meeting to vote on variance requests, and they are paid $30 per meeting.

Currently, the BZA is made up of Eleanor Palmer, the chair and a tax attorney, David Meleca and John Behal, both architects, Bill Demora, a consultant, and Michael L. Jones, a realtor. 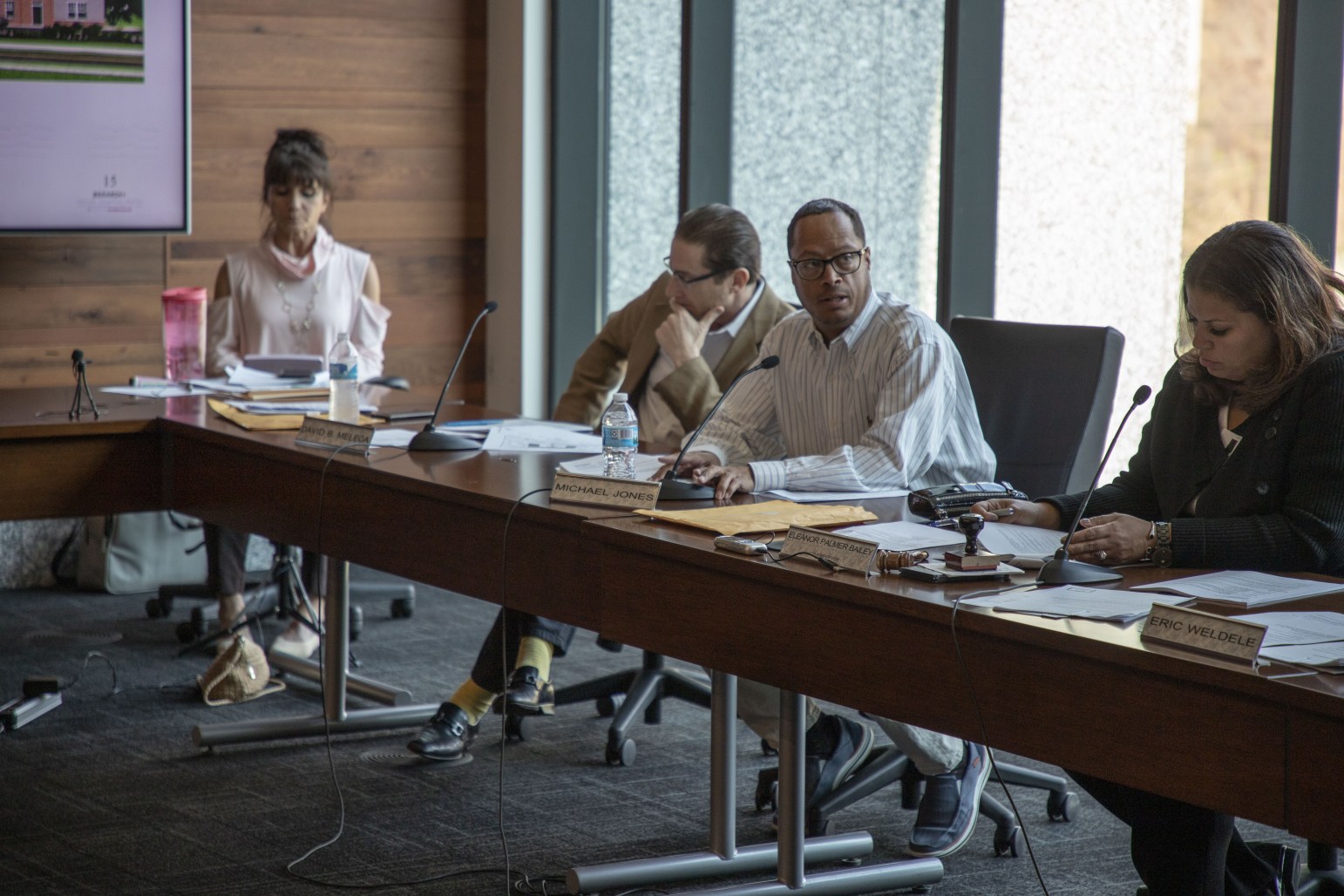 It’s worth mentioning the names of the BZA members here because there is no other way to find them online. I started with a simple search and ended up spending hours pouring over the meeting minutes, yet I still came up empty. Eventually, I found out that they can only be found by attending the meetings or emailing the communications department of the BZS. The same goes for finding out what was actually said during the meetings.

Celebrezze, BZS assistant director, argued that the lack of transparency is in order to protect the BZA members’ status as private citizens. But, by comparison, the area commissions and historic neighborhood commissions have their names listed online, and they don’t receive compensation for their service the way the BZA does. Columbus City Council, which makes similar decisions for the city, regularly broadcasts meetings, and all of them publicly share fairly detailed notes on meetings.

That secrecy, coupled with potential conflicts of interest and weak communication, leaves unanswered questions for some, such as Uhas Sauer.

“These people are experts [in their profession],” she said. “[But] how much training [do] they have from the city themselves? How deeply do they need to know these neighborhoods?”

Written by: Max Wrolstad
Maxwell is an aspiring filmmaker, with a passion for socially conscious storytelling. He graduated from Ohio State University with a degree in Spanish, where he studied films and filmmaking from a variety of disciplines and backgrounds, including Latin American and Spanish films.