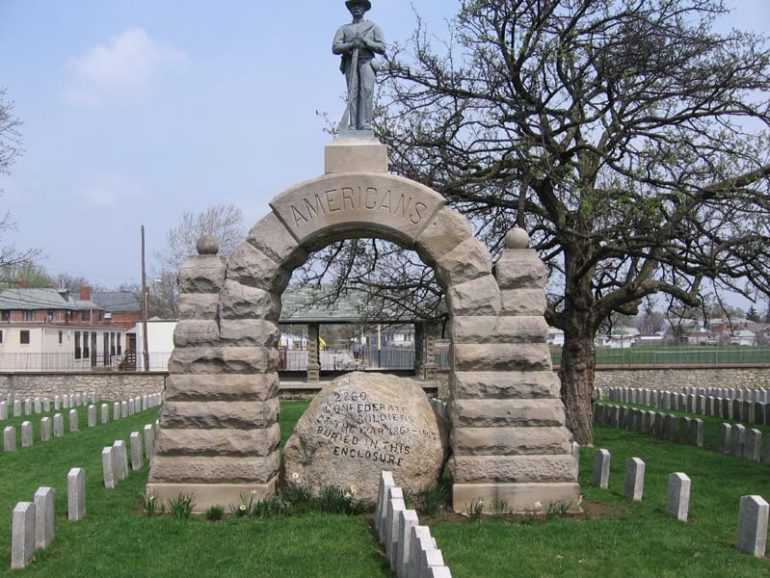 By The original uploader was Georgeccampbell at English Wikipedia - Transferred from en.wikipedia to Commons by Kurpfalzbilder.de using CommonsHelper., Public Domain, https://commons.wikimedia.org/w/index.php?curid=5864894
News

A Confederate Soldier Falls In Camp Chase Cemetery. Was It Vandalism? Or “Uncivil” Protest?

Indignation flares after a Confederate statue in West Columbus was knocked over and damaged last night.

In West Columbus, sometime between last night and 7 a.m. this morning, a statue depicting a Confederate soldier at parade rest was toppled over, damaging the war marker. The memorial stood in Camp Chase cemetery, home to over 2,000 Confederate grave sites.

The destruction of the 115-year-old monument comes just after the controversy of another Ohio Confederate memorial, this one dedicated to Robert E. Lee. Two neighboring townships contested the ownership of the memorial while citizens argued it’s historical significance versus its legacy to slavery and racial subjugation.

As with the Camp Chase memorial, many are in unrest over its removal and destruction. People who had never exhibited an interest in history are becoming opinionated, gnashing their teeth and soapboxing diatribes about a disrespect for American institutions and discourteous forms of protest.

We in Ohio all hated the Confederacy, but seeing Camp Chase being vandalized isn’t cool. Visited it many times to learn about history

Respect the history of the United States

knocking over a statue in the middle of the night = pathetic. not part of a movement. Movement people want to be heard. #CampChase pic.twitter.com/X6o0wSs1Ee

It’s interesting to see people bemoan the toppling of the Camp Chase soldier.

To see that tired old misplaced indignation decrying the desecration of American history. Frustratedly they condemn the act of vandalism, contemptuously advocating instead for acts of “civility” only to snidely mock anyone who might peacefully object to hollow acts of patriotism in an effort to raise awareness using that very same civility.

Maybe the defense of these monuments speaks to a larger truth, one that can only be admitted in hushed conversations or buried underneath passive racist remarks, muffled under barely clever user names in obscure subreddits; that America would rather empathize with an inanimate object resembling a fictional racist before ever empathizing with its living Black kin.