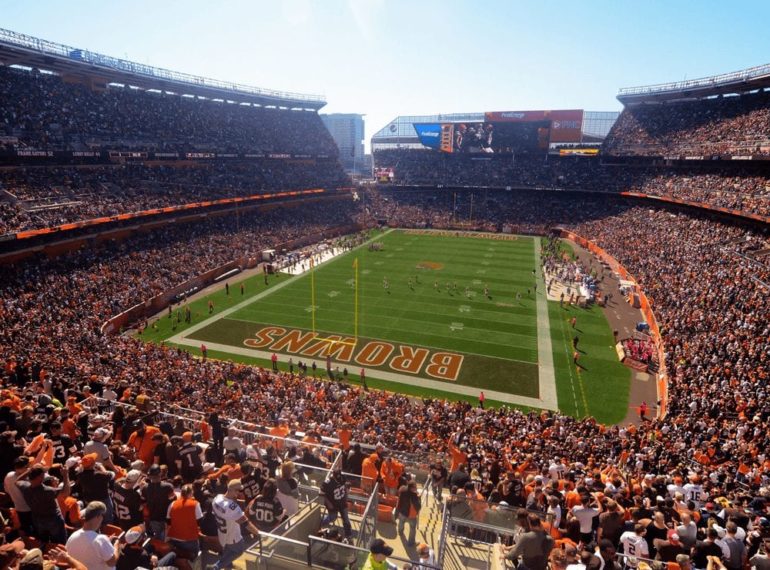 On Monday night, a group of NFL players from the Cleveland Browns took an opportunity to protest President Trump’s rhetoric following the Charlottesville protests earlier this month.

Twelve players took a knee to express their views on racial injustice, including the first white player to do so. The Cleveland Browns released this statement after the demonstration.

“As an organization, we have a profound respect for our country’s national anthem, flag and the servicemen and servicewomen in the United States and abroad,” they said in the statement.

“At the same time we also respect the great liberties afforded by our country including the freedom of personal expression.”

Although some players have made it clear that their actions during the National Anthem have nothing to do with the military, one Ohioan, in particular, took offense to their right to free speech.

“Congratulations Cleveland Browns on your win. Unfortunately my season ended last night. I will NEVER attend a sporting event where the draft dodging millionaire athletes disrespect the veterans who earned them the right to be on that field. Shame on you all. William O’Neill, LTC, US Army, Retired. Vietnam veteran; son of a World II veteran; proud father of an Iraq veteran.”

Perhaps the most perplexing part of this statement is when O’Neill refers to the players as “draft dodging millionaire athletes”.

The draft, also known as conscription, has occurred four times in the United States. The Civil War, World War I, World War II, and the Cold War (including the Vietnam War and Korean War). In 1973, Secretary of Defense Melvin Laird announced that no further draft orders would be issued.

For those in the back, let me reiterate: There has been no draft in the United States since 1973.

It’s unclear which draft Justice Bill O’Neill is referencing in his statement. It makes me ask the question: Which is more alarming? The fact that Justice O’Neill believes these athletes dodged a non-existent draft or the fact that he posted it publicly on Facebook.

O’Neill has been an Ohio Supreme Court Justice since 2013. According to his bio information on the Ohio Supreme Court’s website, O’Neill is “…a former judge, an army officer, a registered nurse, and an adoptive parent,” and was awarded the Bronze Star and the Army Commendation Medal for his service during the Vietnam War.

His anger towards draft dodgers, in general, is understandable. It may even be justified. But perhaps he should direct it towards individuals who are actually guilty of it. If he’s looking for a draft dodging millionaire, he need look no further than the White House.