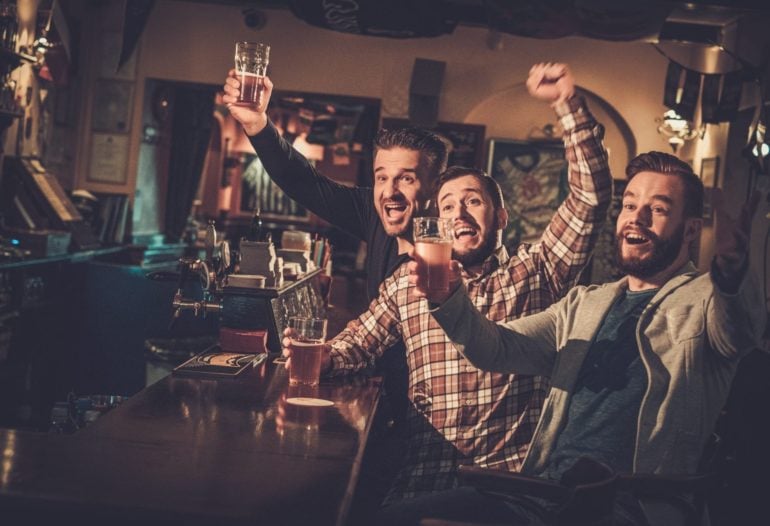 How To Go On A Fiscally Responsible Seven-Day Drinking Bender

“You can’t go on a seven-day drinking bender while spending responsibly”, said the World, rolling its eyes and scoffing. “Aight then. Bet.” Said I, hair flipping my metaphorical mullet, my chin jutted pointedly in defiance.

That’s how the challenge started, at least that’s how it went down in my head. So I set out on a journey, scouring Columbus to find daily drinking specials throughout the city. Using my shadowy network of sad-drinking-people (imagine the Sand People from Star Wars but with 40oz beers and Bumble accounts), I was able to put together a map of the best drinking specials for each day of the week. So who’s gonna be brave enough to actually try and do it? All you need is $50 dollars and a can-do attitude! Trust me kids, it’ll be super easy. Would I lie to you about something like that?

The Deal: $1 off bottles and cans
So, if you have absolutely no standards for beer (hi there) and don’t mind drinking actually kind of bearable hipster cheap beer, you can get cans of Black Label for a friggin’ dollar. And don’t think you’re better than Black Label just because you know what a Saison is. Black Label has been providing suds since the 1870s. If it’s good enough to get cowboys drunk, it’s good enough to wet your unironic Lee Van Cleef mustache.
Olde Towne Tavern
Honorable Mention: The Submarine House
The Deal: $2 dollar tall domestic drafts

The Deal: $2 domestic drinks and $2 well drinks
That’s just one hell of a deal. Not only are you getting a steady sipper for just two bucks, but you’re also getting a steady supply of the hard stuff for the same price. I mean yeah, it’s probably super gross, and you’re probably gonna make that bitter booze face as it makes its way down, but no one ever said this would be easy. Except maybe I did, at like, the very beginning of this article. Meh. Your fault for trusting me.
Woodland’s Tavern
Honorable Mention: Rude Dog Bar and Grill
The Deal: $2 Corona bottles

The Deal: Industry Night Specials vary.
Local Bar offers Industry Night Drink Specials for anyone working in the service industry. Not in the service industry? That’s okay, lie about it. It’s not a jailable offense or anything, what’s the worse that can happen? Besides, you’re probably already drunk anyway, cowboy up.
Local Bar
Honorable Mention: Library Bar
The Deal: $1 house liquors 3 p.m.-9 p.m.

The Deal: 5 for $5 bottles.
Not only do ladies get in for free on Wednesdays, they also offer 5 for $5 bottles. This ensures two things: If you’re a lady, you’re more than likely going to have your buzz ruined by overconfident drunk guys, dual-wielding buckets of beer in each hand. And if you’re a guy, the chances of you dual-wielding buckets of beer and making a fool of yourself has just multiplied by five. I know this all sounds horrible but not so much for the guy recording it on his phone for posterity sake. Me. I’m saying it’s gonna be awesome for me. And the internet.
Little Bar
Honorable Mention: Bernards Tavern
The Deal: State Minimum wine prices (whatever that means)

The Deal: $1 Cans of beer.
I can’t tell you how much I appreciate a good 1 dollar beer night. It’s probably up there with tacos and freshly laundered socks. Now, if some saint/super genius could just combine all of those we might just be on our way to world peace. Can’t you just imagine it? Walking around shoeless with fresh socks, fist full of tacos in one hand, a one buck beer in the other, Kim Jong-Un and Tyler the Creator in a corner, laughing and playing Connect Four? We all have dreams okay. We all have dreams…
Meister’s Bar
Honorable Mention: Shrunken Head
The Deal: Between 5 and 6 PM, during their “Happiest Hour”, they offer well shots and PBR/ Yuengling drafts for $1

The Deal: $1.50 bottles domestic bottles
Okay, so it’s just a mere .50 cents off the one dollar mark. Whatever, It’s a Friday so I can totes let it slide. By this point in the week, if you haven’t lost your job then you’re probably still not holding up very well. Unless of course you are, then congrats, you are an actual alcoholic. But hey, just one more day am I right? I believe in you. You got this. You also probably have extensive liver damage. You know what’s not damaged though? That wallet. Take that world!
The Submarine House
Honorable Mention: RAM Restaurant &
The Deal: $5 off growlers

The Deal: 2 p.m.-8p.m. $1 off draft, $1.75 domestic bottles, $3 well drinks
You made it to the weekend my friend! Sure, your friends and family are probably questioning your decision-making abilities, but you can just shrug off their objections like you usually do. This was important. You did this, and you did it for science. Someday the world will understand. People will shout your praises and sing your song. And it shall be a super catchy song, like twice as catchy as that Gangnam Style tune. The new Mount Rushmore will be the faces of you, Neil Degrasse Tyson, And Justin Bieber (trust me, the kid redeems himself during the next World War). Reward yourself weary bar traveler, with a weekend happy hour courtesy of Bob’s Bar. You deserve it.
Bob’s Bar
Honorable Mention: The Submarine House
The Deal: $1 Small Domestic Drafts

So there it is Columbus, my home-made roadmap of pain. An odd alchemic formula for subjugating one’s liver while liberating one’s wallet.

Now, I’ve never done this tour of force myself because, well, I have normal human things to do during the week, but maybe some day. It could be later this summer, a year from now, or even next week (next week you guys, it’ll be next week), I’ll rally the courage to tackle the seven day crucible. So if you see me at a dollar beer night out there somewhere in the capital city, feel free to give me a supportive nod and buy me a beer. Or, you know, like seven of them since they’re only a dollar… What I’m saying is you should just give me all of your money. Cheers. And you’re welcome Columbus.