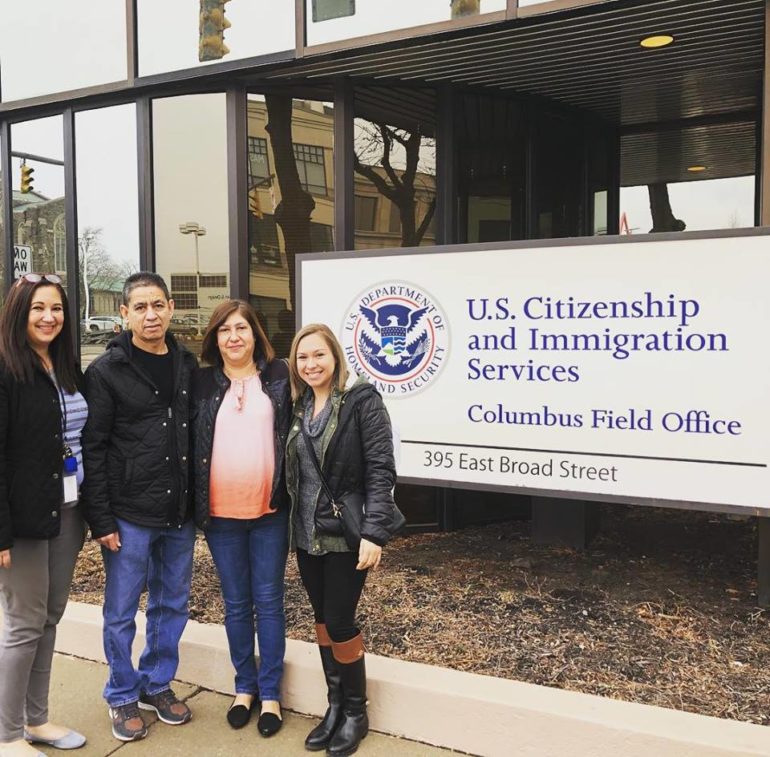 Avanza Together: Community Support for Immigrants

It all started with a phone call.

Last year, Ana*, a member of the Columbus community, contacted Virginia Nunes Gutierrez, desperate for help. Her husband had been detained while running errands by an Immigration and Customs Enforcement (ICE) agent. Due to his status as an undocumented immigrant, he was scheduled to be deported.

“He didn’t have a criminal background record,” Nunes Gutierrez says. “They had lived here for over 10 years and had a small child and a baby. He was the main breadwinner, and she didn’t know what to do.”

Nunes Gutierrez, a Columbus-based international entrepreneur and healthcare professional, acted quickly, reaching out to other members of her network. “It was a call to action for us,” she recalls.

According to the independent data research institute TRAC Immigration, Columbus has one of the highest rates of deportation in the Midwest. The Trump administration’s changes in immigration policy mean that even undocumented immigrants without criminal backgrounds, like Ana’s husband, face a heightened risk of legal action.

Although Ana’s husband petitioned to stay in the US, his attempts were unsuccessful. Ultimately, he was deported to Guatemala, leaving Ana and his children behind. However, Nunes Gutierrez made sure Ana wasn’t without support.

“Thanks to the generosity of so many people, we were able to raise enough to pay for her rent that month as well as utilities,” says Nunes Gutierrez. “We interpreted for her with their lawyer and scanned all of their legal documents on Dropbox. We took food and diapers over to her house. We couldn’t change the outcome of that first case, but we were able to bring back some humanity and hope to an extremely inhumane process.”

Avanza Together was born out of that first call. “This case wasn’t unique – there were many more people that needed help,” she says. The Columbus-based immigrant advocacy nonprofit, created by Nunes Gutierrez and her sister Victoria Calderon, provides support, resources, and practical assistance to immigrants facing deportation and their families.

The mission of the organization is deeply meaningful to Nunes Gutierrez. As a Venezuelan-born first-generation immigrant, she has a unique understanding of the challenges faced by the community she serves. She is a fierce advocate for the rights and dignity of immigrants, rallying support for families in difficult situations.

“In one year, we have been able to serve 226 immigrants through workshops and one on one case management, and two clients became successfully documented,” says Nunes Gutierrez. “We were able to hire on an advocate to serve clients, and we raised and donated over $7,000 for families to cover deportation defense legal expenses – all in just one year. We’re pretty darn proud!”

Community education is another important part of Avanza Together’s work. Calderon and Nunes Gutierrez host informational events and use social media to rally support for immigrants and their families. Past events include community dinners and Know Your Rights workshops. Staff members have also met with Columbus City Council and the Columbus Police Department to advocate on behalf of the immigrant community.

In addition, they work to bring the hidden realities of immigration law to light for those who may not be familiar with the system.

“Most of what happens in our broken immigration system is not talked about,” Nunes Gutierrez explains. “Those most vulnerable to injustice are most often those who don’t have a platform to share their stories. Not many people know, but according to the National Immigrant Justice Center, ICE is the only law enforcement agency in the country that has a detention bed quota they are required to fill – around 34,000 beds per night. They are targeting people that are not a danger, but an asset to our country, to fill these quotas.”

Nunes Gutierrez fights to bring awareness to these practices. “ICE in Columbus now contracts out to one of the largest private prison system operators in the country, the GEO group, to put ankle monitors on our community members and to visit them in their homes if they haven’t been detained yet,” she continues. “It’s an industry driven by our taxpayer money, and our undocumented community members are pawns in this broken system. Those are just a few things that we need to be talking more about.”

The urgency of Avanza Together’s mission means no two days are the same. So what does supporting immigrants look like for staff members and volunteers?

Nunes Gutierrez lists off a number of tasks: “It can look like a trip to Cleveland to provide a community member with transportation to their hearing at Immigration Court, or a visit to the ICE offices for a check-in with a client that has an ankle bracelet on even though they have no criminal background record. It might be a visit to the local food pantry to pick up some food for an immigrant family whose main breadwinner is detained. It might look like a meeting at City Hall to advocate for those we serve.”

For families facing uncertainty, the unique support Avanza Together provides can make all the difference. And while the odds can sometimes seem daunting, Nunes Gutierrez knows the payoff is worth it.

“We worked with an amazing mom who came here from Central America because her baby boy needed medical care he couldn’t receive in her country,” she recalls. “She did what she needed to do for her baby and crossed the border. Her son received his papers and is thriving. He gets a surgery every year to replace a stint in his heart as he grows.”

The baby’s mother, on the other hand, was unable to adjust her legal status and remained undocumented.

“She was targeted for deportation – when pleading to stay with her son, an immigration official told her she should just put her son up for adoption,” Nunes Gutierrez says.

That’s when Avanza Together stepped in, connecting the mother with legal resources. Thanks to the hard work of Avanza’s advocates, the mother was able to avoid deportation and stay with her son.

Keeping families together is at the heart of the organization’s mission. Says Nunes Gutierrez, “Not every outcome is as wonderful, but when things like this happen, it gives us a renewed sense of hope to keep on fighting for those who need it the most.”

Nunes Gutierrez urges anyone in the community who’s interested in making a difference to visit Avanza Together’s website and join their volunteer network or make a donation: “We need you!”

*Name has been changed.