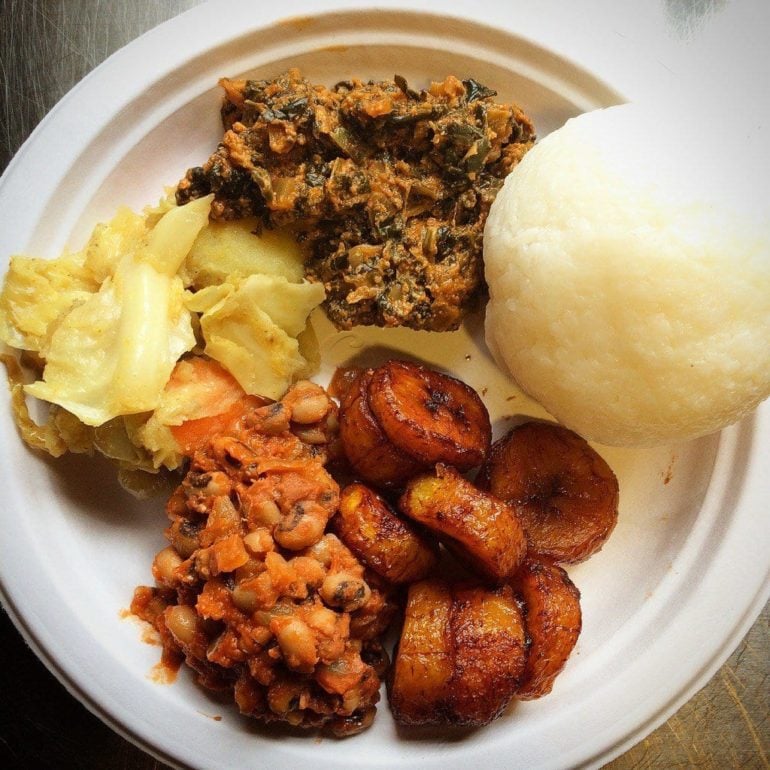 Asempe kitchen has been wowwing the Columbus culinary scene, even winning a Silver Spoon at the Taste of Bexley.

If you’re an adventurous eater in Central Ohio you’ve pretty much got it made. There are so many different international foods and eclectic cuisines for you to choose from you’ll never have a dull moment entertaining your taste palate.

From Indian to Thai and Nepalese, Columbus is a smorgasbord of diversity. Now we can add Ghanaian cuisine to that list with Chef Kuukua’s new pop-up restaurant and culinary service, Asempe Kitchen.

Coming off the tail end of a Silver Spoon victory at the Taste of Bexley food festival and taste competition, Chef Kuukua was kind enough to agree to an interview over a sampling of her West African cuisine.

She sat a plate directly in front of me.

Various helpings of food wafted scents of both spicy and sweet flavors. Saffron rice, egusi (spinach and melon seeds), lamb curry, shiro (chickpeas and lintels), red-red (black-eyed peas), peanut curry, fried plantains, and injera (an Ethiopian sourdough bread), all crowded on my dish together. She smiled kindly, retelling her life’s narrative as I tried each dish in turn.

“I’m originally from Ghana, West Africa,” She said, there was a reverence of old home nostalgia in her eyes as she spoke. “I came to the U.S. when I was 18, straight to Ohio. My mom was here, she’s a nurse. And my uncle was doing his Ph.D. at Ohio State.”

Originally she wasn’t too keen on the Buckeye State. “Well, this was 22 years ago. It was still very country. A lot of people teased me, saying ‘you talk funny’. My whole first year I was miserable. I took a speech class and I went home and I practiced how to talk American every night.”

She now speaks without the telling signs of a West African accent.

Years of speech classes and time in the States have stripped her of the once heavy accent. Time spent in the classrooms of Franklin University, Ohio Dominican, and the University of Dayton for her Masters had chiseled American Standard into her speech.

She idolized American culture and desperately wanted to fit into a world that she had come to know and love from tv and movies. “When we first came I thought McDonald’s was like heaven. Every little penny that I could put together went to McDonald’s fries. It took me about a year and a half of ‘oh my god, it’s American, I want to be American, I want everything to be American’.”

All of that changed after one incident.

“When I recall it, it brings up memories. I was called the ‘n’ word one afternoon while I was at a Burger King. That’s when I was like ‘screw this, I’m not going to patronize their stuff over mine’.”

“That changed it for me. I came into the U.S. thinking ‘I want to be American. I want to be like the stuff I see on tv.’ And then I wasn’t accepted. And no matter how many speech classes I took, people were still saying I sounded funny or that I was different. So I took a step back. I love cooking all the time. Why, all of a sudden, was McDonald’s more important than my spinach?”

As she navigated the nuances of her cultural identity and pursued even higher forms of education, she carried with her that passion for cooking. A love imparted to her by a childhood caregiver.

“When I went to grad school in Berkely, that’s when I really started cooking.

“I realized I could sell the food and make money off of it. That’s partly how I paid for my tuition in Berkeley, cooking and having cooking classes at my apartment.”

Eventually, she moved back to Ghana to teach English. But by then the country had changed and she had too.

“I always thought I would return and settle back there. But I had just been gone too long so a lot of things had changed. I think I was more of a feminist from when I left. There just wasn’t a lot of space for women like me.”

Upon returning to the U.S., she lived in a couple states before finally returning to her first city to start the business.

“For every twenty people, there’s one that’s like ‘I don’t know about that’ but for the most part everyone likes it when they try it. I think people are hesitant because I want to use the traditional names. And so people interact with that first. I want people to interact with me rather than just check off a box and say ‘I want rice and I want spinach’.”

With the current success of her pop-up kitchen, she remains optimistic about the business’s future. “Ideally, we would like a space. Not necessarily centrally located but accessible. Hours wise, not just lunch but maybe also a later dinner so people can still get to us.”

As for now they’re only open on Wednesdays at the Downtown Hills Market.

They can also be found at various cooking and open kitchen events. In the month of November, Chef Kuukua will be hosting two classes for Better Plate Columbus, a non-profit committed to promoting cross-cultural exchange through food-related community events.

They’ll also be hosting a harvest celebration at the Blue & Fig on October 22 at 5 p.m. Tickets are $30 and consists of a main dish, a soup, salad, dessert, and beverage, all made in the traditional Ghanaian fashion.

“For me, it’s always been about sharing. You can share anything but food is the one thing you can share with just about everybody. Everybody eats. It’s a way to bridge that gap.”

For more information on Asempe Kitchen and upcoming events, you can visit their Facebook page here.