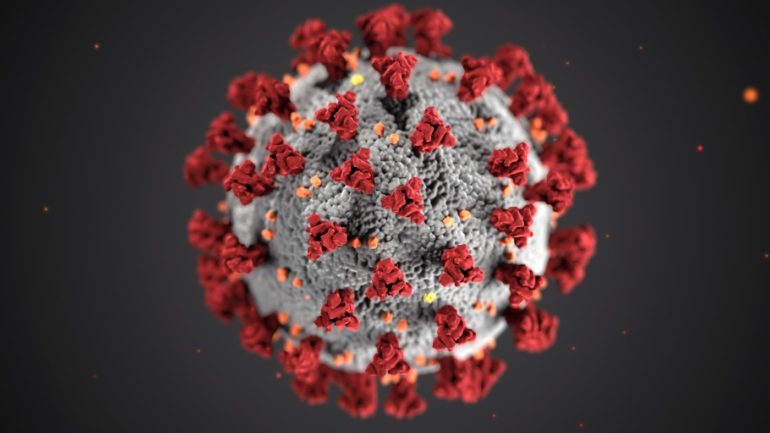 This illustration, created at the Centers for Disease Control and Prevention (CDC), reveals ultrastructural morphology exhibited by coronaviruses.
By Jake Zuckerman

Regulators could allow two COVID-19 vaccines for emergency use as early as December, but getting the vaccines from out-of-state manufacturers to 11.7 million Ohioans poses a web of logistical challenges.

Doses must be stored at -94 degrees Fahrenheit. Some hospitals have such “ultracold” freezers to use, though many in rural areas do not. The have-nots can store doses via common refrigeration for up to five days or via three cycles of dry ice for up to five days each.

Both the Ohio Department of Health and the Ohio Hospital Association said in statements they do not yet know just how many ultracold freezers are in Ohio or where they’re located.

“That’s not something that we’re going to have,” said Wood County Health Commissioner Ben Robison. “Planning for the unavailability of that is going to be really important.”

Pfizer said early results from its clinical trials suggest the vaccine is about 90% effective — much more than expected — although the data is incomplete and was announced in a news release as opposed to peer-reviewed journal.

On Monday, Moderna announced preliminary data indicated its vaccine was 94.5% effective. Data on the vaccine, which also requires two doses but does not require ultracold storage, is similarly incomplete and not yet peer reviewed.

The Food and Drug Administration will ultimately weigh the efficacy and safety of either candidate before allowing its use.

Experts agree the vaccines will be in short supply at first, raising the crucial question of who gets the first doses and who does not.

The complexities are everywhere: How does a vaccine requiring ultracold storage make it to rural Ohio? How do health departments ensure people come back for their second dose?

Gov. Mike DeWine, speaking to CNN on Sunday, said Ohio’s first 30,000 vaccine doses are expected in December. They’ll be used to vaccinate nursing home staff, believed to be vessels that ferry the virus into group homes, which drive the bulk of the death toll.

“We’re ready,” he said. “It doesn’t mean there’s not going to be potential glitches, nothing runs perfectly, but our team has certainly been working on this.”

In Wood County, Robison said a lack of cold storage isn’t the end of the world; it just means finding workarounds like building a supply chain of dry ice or figuring out how to order the maximum amount of doses his department can disburse without wasting any.

John Palmer, a spokesman for the Ohio Hospital Association, said the group is canvassing members to determine how many ultracold freezers are available in Ohio.

“There is still considerable work needed on this effort before it becomes applied to the market,” he said. “An immediate concern is [the Pfizer] vaccine’s need for super-cold storage requirements as hospitals may not have those resources.”

She said beyond the storage requirements, Pfizer shipments come in packages of 975 doses, which would seem to favor larger hospital networks.

Dr. Barry Bloom, a professor at Harvard University’s T.H. Chan School of Public Health, said Monday that while public health officials are working hard to iron out the logistical quirks, he’s unsure of national preparedness on a state level for the vaccines.

“Things are in process, but if those vaccines were available today, I’m not confident we could get the first batch of either of them organized to give out today,” he said to reporters.

The upside, Bloom noted, is Moderna’s vaccine has “less stringent” temperature requirements, a promising sign for poorer and more rural areas without access to ultracold storage.

The Ohio Department of Health did not respond to requests for an interview with Immunization Program Chief John Joseph. In a statement, ODH spokeswoman Melanie Amato said ODH is gathering information on the state’s ultracold storage capacity.

Several hospital networks indicated they have the ultracold freezers handy. However, most declined to offer specifics and referred questions to ODH.

Crystal Tubbs, the Associate Director of Pharmacy at the Ohio State University’s Wexner Medical Center, declined an interview but said in a statement that the department has ultracold chain storage capacity.

A Cleveland Clinic spokeswoman said the hospital has “sufficient storage available” to meet the needs to the Pfizer vaccine but declined to specify.

Moderna’s announcement on Monday came as welcome news to a worsening pandemic in Ohio, where daily COVID-19 case records are shattered on a daily basis. Three times as many Ohioans were in the hospital Monday with COVID-19 on Monday than there were just a month ago.

Ohio released its vaccine distribution plan this month, which prioritizes health care workers, the elderly, and the immunocompromised ahead of the general population.

More than 305,000 Ohioans have been infected with the new coronavirus. This indicates the vast majority of residents still have no immunity to the virus, underscoring the stakes for a disbursing a vaccine.

Robison said the key is to be flexible, expect the unexpected, and figure out some contingency plans.

This article originally appeared on Ohio Capital Journal on November 17, 2020 with the headline, As COVID-19 vaccines near, Ohio’s distribution challenges loom.