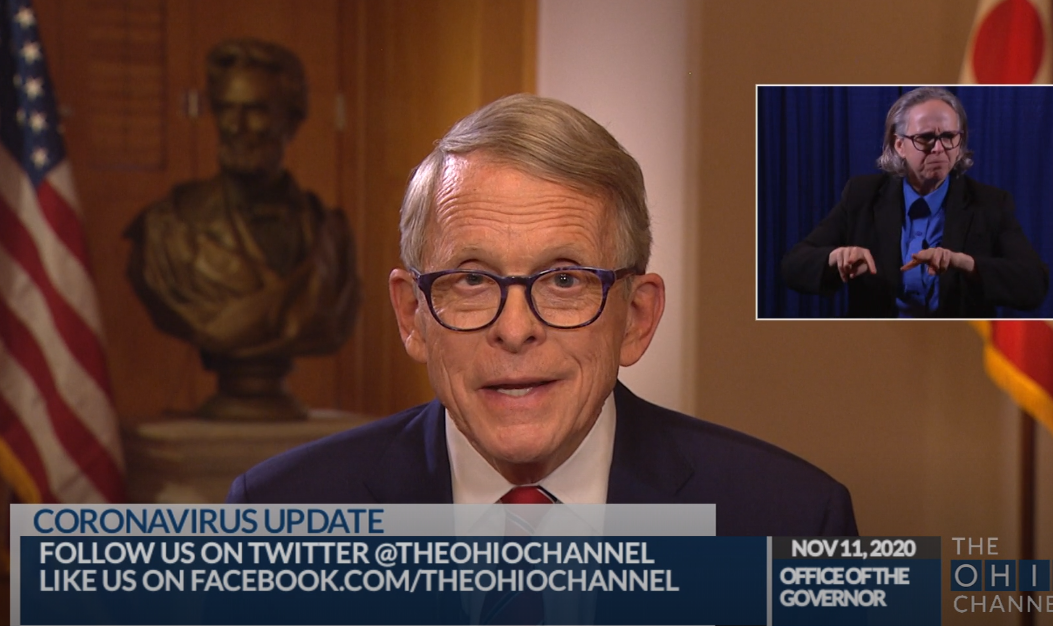 Gov. Mike DeWine on Tuesday blamed Republican lawmakers for his inability to take stronger action against a surge in coronavirus cases — particularly among children. But he wouldn’t say they shared blame for a crisis that is putting children and adults on ventilators and straining hospital capacity across the state.

And despite saying he’d like to take stronger action against the virus, DeWine justified his criticism of a vaccine-or-test mandate issued by President Joe Biden last week.

In an attempt to persuade local school boards to adopt their own mask mandates, leaders of children’s hospitals across Ohio on Tuesday said the situation has become dire since children returned to class this year — without a statewide requirement to mask up against the coronavirus.

The daily number of coronavirus cases among children has more than tripled since July, and the hospitals say they’re staggering under the load that it and other respiratory issues are putting on their intensive care units and other facilities.

“Twenty five percent of the (coronavirus) cases in Ohio are kids,” said Deborah Feldman, president and CEO of Dayton Children’s Hospital. “We’re feeling that in our children’s hospitals. We’re seeing demand in our emergency departments and our access points at unprecedented levels.

“Today we had two beds — two beds — available in the hospital for children who need them excluding our (neonatal intensive care unit) and behavioral health beds.”

The hospital is so overloaded that some parents are taking their children away without being seen.

“One day last week at Dayton Children’s we had 40 families leave without their child being seen,” Feldman said. “On a given day under normal circumstances, we have zero children leaving without being seen.”

In the northwest corner of the state, Toledo Children’s Hospital is “being overrun at virtually all our access points,” said Paula Grieb, the chief nursing officer.

Across age groups, the strain of infections was so bad that at 10 p.m. Monday all Lucas County hospitals went into “EMS bypass” mode, meaning they had to scramble to determine which patients most needed help and which hospitals could take them.

Thanks in part to the fast-spreading delta variant, case counts have been rising among all age groups in Ohio. And Gov. Mike DeWine has been taking heat for not re-imposing statewide mask orders that were in place last year.

“How did Ohio Gov. Mike DeWine go from being a forceful voice and uncompromising leader in the national war on the pandemic to a toothless politician seemingly afraid of his own shadow?” Dayton Mayor Nan Whaley, who is running for the Democratic nomination next year’s gubernatorial election, tweeted.

"How did Ohio Gov. Mike DeWine go from being a forceful voice and uncompromising leader in the national war on the pandemic to a toothless politician seemingly afraid of his own shadow?"

For his part, DeWine said he was left to call on school boards to implement mask mandates because a measure adopted in March by his fellow Republicans in the Ohio General Assembly is tying his hands. It limits any health order by the governor to 30 days and requires legislative action for any extension.

“The legislature has made it clear to me they will not hesitate and they will repeal a mandate that I put on,” DeWine said. “And all that will do is cause a great deal of confusion and then I think people would say, ‘Well there’s no mandate on, there’s no requirement on, we can go back, there’s really no reason to keep masks on. I’m afraid what would happen is we would slide backwards, we would go the wrong way.”

But the governor wouldn’t say that the lawmakers tying his hands shared blame for the fact that so many Ohio children are lying in ICU beds and that so many other Ohioans face bottlenecks in getting lifesaving care.

“I’m an optimistic person,” DeWine said when asked if those legislators are responsible for needless illnesses. He said that during a Tuesday conference call with school superintendents where participants discussed whether they could explain the crisis to lawmakers. “I’m optimistic that as people learn the facts, they will take a look and maybe re-evaluate what their position is.”

Perhaps similarly, DeWine at the beginning of the pandemic took strong steps — including curfews and statewide mask mandates — but throughout he steadfastly refused to criticize former President Donald Trump’s many, many false statements downplaying the pandemic.

And DeWine joined a chorus of Republicans who decried Biden’s announcement on Friday that he would use occupational-safety laws to require businesses that employ more than 100 to ensure that workers are either vaccinated or tested every week.

“I think the President made a mistake by announcing federal vaccine mandates,” DeWine tweeted on Friday. “We should be focused on the science of preventing virus spread — the vaccine is our best tool to stop COVID  — but people and business owners should make their own decisions about vaccination.”

I think the President made a mistake by announcing federal vaccine mandates. We should be focused on the science of preventing virus spread – the vaccine is our best tool to stop COVID – but people and business owners should make their own decisions about vaccination.

DeWine is opposing Biden’s move even though the vast majority of states have long had some form of vaccine mandate on their books. With limited exceptions, Ohio children have to be vaccinated against Chicken pox, Diphtheria, Hepatitis B, Measles, Meningococcal disease, Mumps, Pertussis, Poliomyelitis, Rubella and Tetanus if they want to attend school.

Even though the vaccine has been abundant in Ohio for months, only 57% of eligible Ohioans are fully vaccinated, despite the fact that DeWine has labored mightily to convince people to get the shot.

Even with that track record, DeWine said that Biden’s approach would be less effective.

“It plunges us into more of a political debate which I think clouds the science and what I think we’re trying to get accomplished,” DeWine said Tuesday.

DeWine made the statement even though polling indicates that a majority of the public supports vaccinate-or-test mandates. In his announcement, Biden voiced growing frustration with the minority of Americans who refuse to acknowledge the science of vaccines and the pandemic.

“It will take a lot of hard work, and it’s going to take some time,” Biden said, according to a version of his remarks released by the White House.  “Many of us are frustrated with the nearly 80 million Americans who are still not vaccinated, even though the vaccine is safe, effective, and free.”

As he tries to talk school boards into adopting mask mandates, DeWine acknowledged that some face heavy pressure from aggressive opponents.

Patricia Manning, chief of staff at Cincinnati Children’s Hospital, said she’s frustrated that opponents of safety measures seem to be calling the shots over the majority who want them.

“It’s frustrating to be in a place where everybody seems to want the same thing — the health of children and for children to be in school, but not know how to get there,” she said. “It’s also frustrating to feel like the will of a smaller — a minority — of people is trumping the rights of a majority of people and certainly of children to be safe and be free from sickness and infection and disease.”

This story was originally published by Ohio Capital Journal on September 15, 2021 with the headline “As child COVID toll mounts, governor says legislature has tied his hands“.