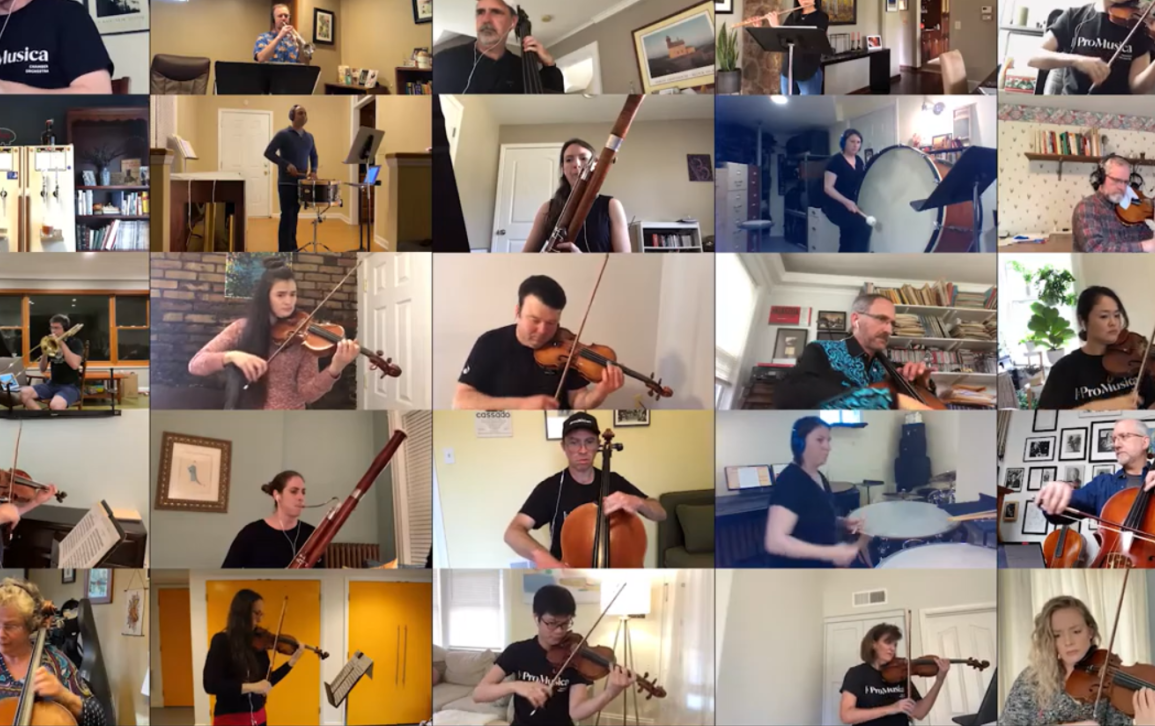 Members of the ProMusica Chamber Orchestra give a virtual performance as the conclusion to their 2019-2020 season. Screenshot from ProMusica.
Arts

Elizabeth Brown-Ellis and Dr. Philathia Bolton spent the last two years watching the pandemic put a damper on their communities.

As a University of Akron professor, Bolton watched her students dig for inspiration and purpose amid online classes and an isolated college experience.

As head of the Lima Symphony Orchestra, Brown-Ellis watched 75 musicians adapt and find ways to make ends meet while the audience moved from the seats in front of them to their computers at home.

But what they didn’t see was a dimming of the need for arts in education and in the community navigating a world without public events.

“Arts are not just leisure activities, arts are fundamental parts of our society and our economic prosperity,” Brown-Ellis said.

Brown-Ellis and Bolton are two of the newest members of the Ohio Citizens for the Arts’ Board of Directors, with Brown-Ellis serving as president of the board. The OCA is an advocacy organization that lobbies the state General Assembly and Congress to support arts in the state.

Bolton, who teaches 20th and 21st Century American literature and specializes in African American literature, saw the impact of the arts in one particular student, who said coming back to in-person gave her a new purpose, and even used a painting to express her feelings about the readings in Bolton’s class.

“There’s so much exhaustion (from the pandemic),” Bolton said. “I don’t know when it clicks or when it happens, but I think art…has this way, no matter where we are, of finding us and pulling us in, and making us realize what matters.”

For some people, it’s the tradition of going to the Nutcracker Ballet, for others it’s learning about the Harlem Renaissance. But for many, the arts represent a return to normalcy, something that the state and federal governments need to realize helps employers attract workers and keep residents in Ohio.

“It’s a way to look to your left or your right and you’re connected with our communities and with our people,” Bolton said.

Brown-Ellis is the perfect example of that concept. Formerly an international financial attorney in a different state, she moved back to her hometown of Lima looking for a marketing job while waiting to take the Ohio bar.

When the Lima Symphony Orchestra took her in, she fell in love and left the legal work behind.

“We have the opportunity to make an impact here,” Brown-Ellis said. “Because it is a small town, there is so much opportunity and obligation to bring performing arts to the seven-county radius.”

The arts “were given a lifeline” with pandemic relief funds coming to the arts industry, which Brown-Ellis said still has one of the highest unemployment rates.

In November 2020, the state put $20 million in CARES Act dollars toward the arts, considered a temporary stop-gap.

That lifeline came after $74 billion in estimated monthly losses for “creative occupations” due to the pandemic, according to a 2020 report by the Brookings Institution. The OCA released a report in 2018 saying creative occupations accounted for $41 billion in state economic activity, and 290,000 jobs per year.

This month, the arts industry got a total of $1,065,000 from the National Endowment for the Arts, in the form of 45 grants. Three of those grants went to Ohio research facilities “to analyze the value and/or impact of the arts,” according to the NEA.

The future of the Ohio economy is beginning to depend on the arts and humanities, according to those teaching the students going into the workforce. Bolton said she’s heard from people in the financial and insurance sectors who are looking to connect with humanities students.

Bolton argues the creativity and critical thinking that comes from arts education brings different voices to the table that can adapt as the state and country does.

“When you’re part of our country and you’re concerned about the well-being of your state, it behooves us to do what we can to take care of our people,” Bolton said.