A Year Into Pandemic, Dewine Says Ohio On The Right Path To Lift Restrictions But Can’t Ease Up Yet 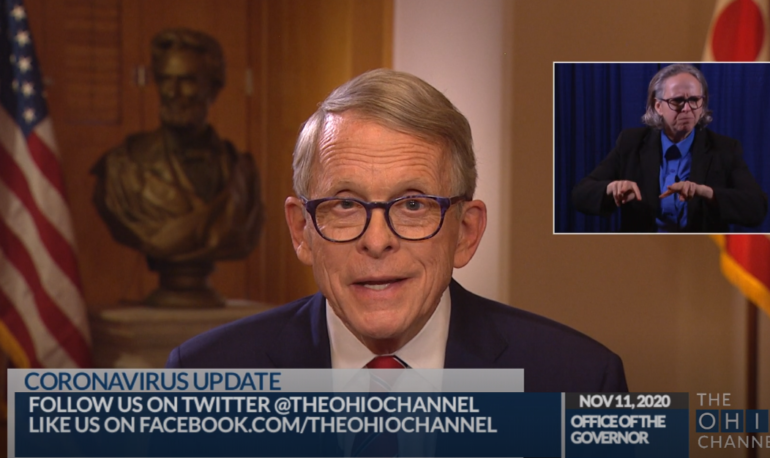 A year ago Wednesday, the coronavirus pandemic officially started in Ohio when the decision was made to cancel The Arnold sports festival.

On Thursday, Gov. Mike DeWine gave a primetime address to tell Ohioans that a return to normal is in sight — so long as they don’t become complacent.

“No marathoner pulls out on purpose at the 25th mile marker,” DeWine said.

The governor made some news during the speech. He announced that he would lift all remaining health orders once the number of coronavirus cases drops to 50 per 100,000 Ohioans.

However, such drops can’t be counted on to continue. Federal health officials reported this week that daily numbers appear to be hitting a plateau at levels that might seem low after the past several months, but were perceived as quite high last summer.

Also concerning is that at least six worrisome variants of the virus are struggling to gain a foothold. Some are more transmissible, others more lethal and still others less susceptible to the three vaccines that have been approved in the United States.

DeWine’s unusual primetime speech was to mark the one-year anniversary of Ohio’s fight against the disease.

It also was to announce the metrics by which he’ll decide to lift remaining health orders.

But it also seemed a repudiation of two other Republican governors’ announcements in recent days that they were lifting all of their orders — including ones requiring mask wearing in indoor public spaces. Texas Gov. Greg Abbott and Mississippi Gov. Tate Reeves both made such announcements on Tuesday, prompting widespread condemnation from public health experts and from President Joe Biden.

Anthony Fauci, the leading communicable disease expert in the country, said the daily number of new cases needs to be one-sixth of what it is now before ending mask mandates should be considered.

DeWine didn’t mention other states, but he made it clear that Ohio’s mask mandate would remain in place for the time being. As he touted the rapidly growing number of vaccines coming into Ohio, he said, “We have one battle-tested tool that has worked so well and that is the mask.”

The governor also appealed to Ohioans’ community spirit — a spirit that critics have said is lacking in Abbott and Reeves’ approach to the pandemic.

“It’s been a difficult year,” DeWine said. “But we did what Ohioans always do. We rallied together. We sacrificed. We showed the world our Ohio grit. Our communities have come together.”

This story originally appeared on Ohio Capital Journal on March 5, 2021 with the headline, “A year into pandemic, DeWine says Ohio on the right path to lift restrictions but can’t ease up yet“.