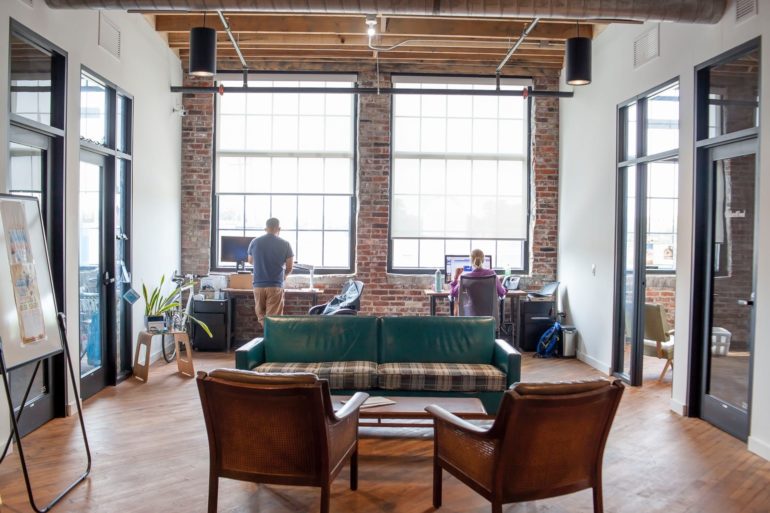 The Idea Foundry is a breathtaking coworking space. It’s a great place to set up shop, whether you’re planning to work at a desk or a tool bench.

Located in Franklinton at 421 W. State St., the Idea Foundry is an amazing space to work. A large multi-room workshop rests on the first floor and various artisans and craftsmen use the space to create a multitude of stuff. There are hundreds of tools that range from 3D printers, table saws, to lasers that can cut the most intricate things. The second floor houses a coworking space with high ceilings, windows that allow natural light to flood in, and multiple hidey-holes provide privacy for the those that use the space. The mezzanine level is a fantastic place to sit down and work for the day when you desperately need a change of scenery.

You can sign up for all sorts of classes at the Idea Foundry, too. Learn the steps you need to take to start your own limited liability company (LLC) or take a blacksmithing 101 class. This place is all about helping people achieve their career goals, no matter the career path they’re in.

The Idea Foundry was founded in the year 2008 by Alex Bandar. The CEO started small, with a simple tool share concept, but now the Idea Foundry has grown into a massive 60,000-square-foot collaborative workspace for folks that use both laptops and tools in their day-to-day tasks. Thanks to the three different floors, the Idea Foundry has a space to meet the needs of all 500 of their members.

It’s part of what makes it the most versatile coworking space in Columbus.

“We tried to give a combo of options, [so members would] be able to have communal collaborative spaces and also be able to ferret away and have quiet time,” said Casey McCarty, the Chief Operations Officer at the Idea Foundry.

The Idea Foundry has been in their current building since 2014, but the second-floor coworking space just opened in February 2017. It is made up of 32 private offices, 10 to 15 dedicated desks, multiple meeting and class rooms, a kitchen, and a whole lot of open coworking space.

A champion of small business and entrepreneurship, the Foundry has multiple tenants that are just launching their businesses. But that doesn’t mean they don’t also have a couple big names in the office spaces, too.

“We’ve got a nice mix of grassroots and start-ups and local corporate entities that are trying to think a little bigger,” said McCarty.

The corporate businesses in the Idea Foundry are using their space there to come up with new, innovative ideas and think outside the box. VSP, a vision insurance provider, has their prototype lab at the Foundry. Nationwide Children’s Hospital has a prototype lab there as well. AEP Ohio is getting ready to move into the space to work side-by-side with the Smart Columbus team.

Whether they’re just starting or employees of a larger cooperation, the members of the Idea Foundry have one thing in common.

“They don’t want to be in the cubicle farm and they don’t want to have the fluorescent lighting that buzzes in the background,” McCarty explained. “I think that the space just encourages some of that exploration that everyone says that they’re looking for.”

The building is roughly a century old. It was originally a shoe factory, then it was owned by Harley-Davidson, and then it sat empty for a number of years. The City of Columbus ended up gifting the building to the Franklinton Development Association, an organization dedicated to the revitalization of the neighborhood. The association sold the building to the Idea Foundry as another way to build up Franklinton.

When remodeling the second floor for the coworking space, McCarty explained that they used the building’s history to help influence the layout, all while making the space functional and a great place to work.

“We tried to keep as much of that authenticity as possible when merging design for this,” said McCarty. “It’s the original timbers and the original floor to pay homage to the industrial revolution aesthetic.”

The workshop, also known as the Makers’ Space, is where the tribute to industrialism really shows. Mainly because the space is still an industrial one. It consists of a lathe room, mold making room, metal fabrication, paint room, auxiliary workshop, wood shop, classroom, welding room, private studios, and workbenches.

Now that the second floor and mezzanine renovations are complete, the Idea Foundry can focus back on the workshop that helped them get where they are today.

“Some of the improvements that we’re making right now to the Makers’ Space component are definitely less sexy than the build out of the second floor,” laughed McCarty. “But they’re things that matter to the Makers.”

These improvements include fume extractor hoods, better air ventilation, better dust control, and other health and safety measures. They might not be as aesthetically pleasing as the coworking space’s makeover, but it’s just something that has to be done.

The Idea Foundry is such a cool concept because there is so much you can do.

“There’s a number of ways that people can get involved here. They can take a class. We also have public tours a couple times a week,” said McCarty.

Check out the Foundry’s open house during the Franklinton Independents’ Day Festival. This year the festival will take place on September 16 and 17. It’s a great time to just swing by explore the place.

Want the full tour of the Idea Foundry now? Check out the images below! And for more information about the Foundry visit their website.

Think your workplace is awesome? Would you like to have your office featured in our 614 Offices? Get in touch with us here.